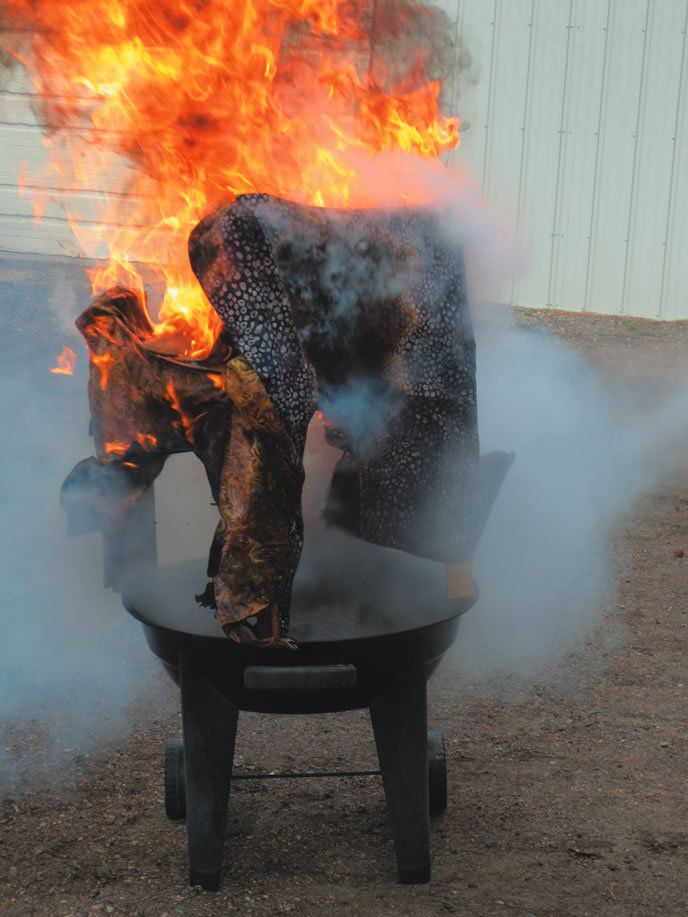 The idea of an inflight fire rightfully scares the bejabbers out of pilots. Uncontrolled combustion in a confined space is ugly enough—adding altitude and speed to the mix can make a fire lethal in short order. It’s no wonder that pilots dealing with an inflight fire have jumped out of their aircraft even though they had no parachute.

While inflight fires are rare, we think that every aircraft should have an effective fire extinguisher in the cabin where the pilot can reach it quickly and easily.

Our research and testing has led us to a two-fold conclusion as to what type of extinguisher you should carry in your aircraft: First, effective means an extinguisher that uses a “clean agent,” either Halon or one of the Halon alternatives—if it is possible to extinguish the fire you’re dealing with, they will do it and they won’t hurt you or the aircraft in the process. Second, a dry chemical extinguisher—the most common type we see in aircraft—uses chemicals that have effects on the occupants and the aircraft that are so pernicious that we recommend against their use in aircraft. We’ll tell you why we came to those conclusions.

For years we’ve been told about the fire triangle—with three essential elements for a fire: heat, fuel and oxygen—and that removing any one will put out a fire. That description is true, but incomplete. There is a fourth essential element: the chemical reaction that allows the other three to combust. Without the chemical reaction of the three other elements, heat, fuel and oxygen will happily coexist without starting to burn.

Fire extinguishers act to remove one or more of the fire quadrilateral—as we’ll discuss below, extinguishers we consider appropriate for aircraft primarily interrupt the chemical reaction and don’t remove the oxygen.

Despite interior fabrics made of materials that will self-extinguish or at least act to slow fire propagation, aircraft and their cabins have plenty of stuff that will burn nicely, thank you. Much of it is what we bring in, clothing, paper, pillows and baggage. This is a good spot to note that you should not wear synthetic materials, such as nylon, when flying—exposed to flame, they melt onto your skin, causing serious burns.

Aircraft fabrics that self-extinguish only do so when the fire source is removed. If there is an electrical or avgas-fed fire involved, the interior materials will burn. What’s worse is that once they do burn, the fire-blocking chemicals with which they are treated cause them to give off gases that are toxic in small quantities—in addition to the usual toxic products of combustion, carbon monoxide and carbon dioxide that will do their best to kill you as the fire deprives the cabin of oxygen.

Bottom line, a fire in an aircraft cabin will kill you via the toxic gases it emits or the flames themselves. Unless you are on the ground and stopped when a fire breaks out, your survival may be dependent on having an effective fire extinguisher that you can reach right now.

We are aware of hangar-flying sessions in which pilots have said they wouldn’t use a fire extinguisher in the cabin because the gases it expels are worse than the fire. That’s absolutely untrue. While we don’t recommend a dry chemical extinguisher, in an emergency using one is safer than letting a fire burn. Visibility will go to zero for some time and you’ll be left with a large, corrosive mess.

Fire extinguishers are rated for the type of fire they are designed to fight, per the National Fire Protection Association (NFPA). Class A fires are ordinary combustible materials such as wood, cloth, paper and plastic. Class B fires are flammable liquids, oil, grease, paint and flammable gases. Class C fires are from energized electrical equipment—the extinguishing agent should be non-conductive. Class D fires are combustible metals such as magnesium, titanium and lithium.

For aircraft fires, the NFPA recommends—and all the sources we researched agree—the fire extinguisher should be capable of handling Class B and C fires. The letter rating is shown on the extinguisher

Fire extinguishers for Class A and B fires also display a numeric rating in front of the letter rating—the higher the number, the more effective the extinguisher for a particular fire. The number rating is a statement of how big a fire, in square feet, the unit should be able to extinguish.

For a two- or six-place general aviation airplane, we recommend at least a 5B:C extinguisher.

The most effective extinguishing agent for Class A, B and C fires, bar none, is Halon—which the FAA describes as one of the class of halocarbon chemicals. It, and newer Halon alternatives, are considered clean agents because they pose little risk to humans in the area when discharged. The clean agents stop the chemical reaction necessary for a fire.

Unfortunately, Halon is a chlorofluorocarbon that does tremendous damage to the ozone in our atmosphere, and its manufacture has been illegal since 1994. Enough was made that, through recycling of Halon from extinguishers that have not been used during their 12-year service life, there is still an adequate, but shrinking supply. Halon alternatives do not have the adverse effect on the atmosphere, have a low carbon footprint and are legal to manufacture.

We spoke with Chris Dieter, senior vice president of H3R Aviation, the major player in the aviation fire extinguisher world, who told us that there has been a great deal of research into finding a Halon replacement—and Halon is gradually becoming harder to get. The most common of the Halon alternatives is Halotron. Currently, a fire extinguisher using Halon weighs half that of the same-rated extinguisher using a Halon alternative. However, according to Dieter, that may be changing in the near future as more effective clean extinguishing agents are being developed.

Weight is the only difference when it comes to Halon and Halon alternative extinguishers—the same rated extinguishers are priced about the same. For a 2B:C Halon or Halotron, we saw prices between $100 and $120. For a 5B:C extinguisher, street prices ranged from $165 to $220.

In 2008, before the FAA recommended against using dry chem extinguishers, Aviation Consumer tested Halon and dry chem fire extinguishers on a rig designed to simulate aircraft cabin materials. Both types extinguished the fire. This time we decided to go one better by constructing a wood structure about the size of an aircraft seat, stapling burn-tested interior materials provided to us by Centennial Aircraft Interiors as well as fabrics aircraft occupants would wear. We put a throw pillow of the sort we see routinely carried in airplanes on the seat. The pillow proved to be a big deal.

Next we sprinkled a quarter-cup of mogas on the various fabrics and the pillow. When we applied flame (using an fireplace igniter), the rig lit and became an inferno within 20 seconds.

We used a 2B:C Halotron extinguisher per the instructions—start eight feet from the fire, aim at the base and use a sweeping motion. We used short bursts (figure on about 10 seconds of extinguishing material) and knocked the fire down completely on the side of the rig facing us. However, the pillow was shielded by the seat back and was burning intensely. We moved around to spray it, but we ran out of agent.

Using a 1AB:C dry chemical extinguisher, we were able to put out almost all of the remaining fire—a bit of fabric continued to smolder. Stepping on it a few times solved the problem.

We came to three conclusions: we disagree with recommendations that a 2B:C extinguisher is large enough for a two- to four-place airplanes—we recommend a 5B:C extinguisher. Second, after seeing (and breathing some of) the cloud generated by a small dry chem extinguisher, if we ever have to use an extinguisher in anger in the cabin of an aircraft, we want it to be a clean agent rather than dry chem. Finally, that throw pillow you use behind your back can be a menace.

We’ll put it bluntly, if you don’t have a fire extinguisher in your airplane, buy a Halon alternative clean agent unit—or Halon, if weight is an issue—5B:C extinguisher and mount it where you can reach it easily.

If you have a dry chem extinguisher in your airplane, follow a two-step approach: first, take it home and put it in your kitchen where it can be easily reached; second, follow the recommendation in the previous sentence before further flight.