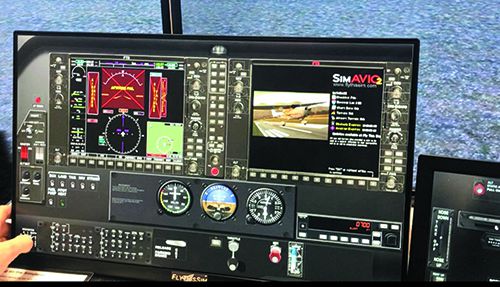 While I’ve flown G1000-equipped aircraft, I’m fairly sure the amount of time I’ve spent in G1000-equipped simulators far outstrips the time I’ve spent in the air with the system at this point. My first introduction to the G1000 was in a Cessna 172-configured sim. Being the somewhat obsessive student I was, I studied the then-new G1000 before that first sim flight pretty extensively. I arrived having memorized a good chunk of the manual and could point to components, name LRUs and so on.

I quickly discovered that while my studying was certainly useful, it did very little to prevent me getting seriously confused and behind in the sim when flying the airplane had to happen at the same time as pushing all of those buttons. I’ll never forget just how overwhelming it was to go from feeling like I had everything pretty well handled on a 172 with a standard six-pack to being sure I had no idea where to look or what to do next. I followed the Cessna sim up with a Piper configuration and a King Air setup and using the G1000 eventually became second nature.

Working on this e-study G1000 course review was a good reminder of those days. It meant I had put myself in your shoes by thinking back and walking myself through which pieces of information were most useful when I knew nothing about the system, and which parts of my training didn’t work so well. Looking at it that way, my primary takeaway is that an interactive environment is invaluable when it comes to learning the G1000.

Being able to bring that kind of training home, at least in part, is a great resource and one that’s only served by a sim. We’ll look at simulator-based avionics ground courses for retrofit and OEM glass in a separate article.