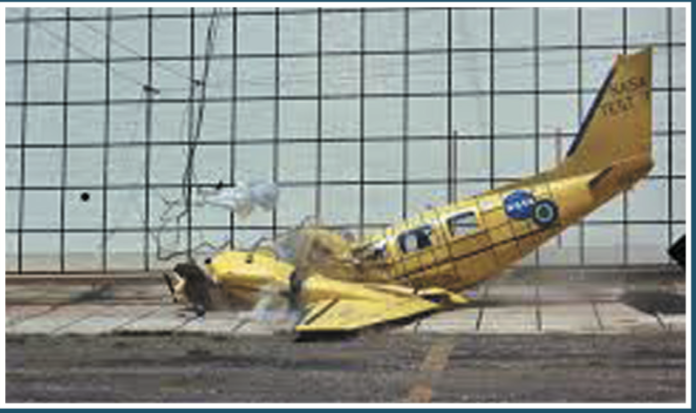 As we were reviewing the accident reports involving the Meyers 200 as part of this month’s Used Aircraft Guide, we ran across one that was depressingly familiar. The pilot landed hard, on all three wheels. He then started pulling back and shoving forward on the wheel, developing classic PIO—pilot induced oscillation—as the airplane bounded between the mains and the nosewheel.

Unfortunately, the nosewheel hit an old-style runway light, which did not break off. It collapsed the nosegear and the airplane stopped.

Of course, following Newton’s first law of motion, the occupant kept going until his seatbelt stopped his hips. The rest of him jackknifed around the seatbelt, causing his face to slam into the instrument panel. The pilot received serious, life-threatening injuries because he wasn’t wearing a shoulder harness.

We’re going to talk about crash dynamics and how we can protect ourselves if something ugly comes to pass. The good news for aviation crash survivability is that the majority of crashes involve relatively low-speed events—loss of control on the runway—so they should be survivable if the occupants are properly restrained.

Before going further, it’s essential to stomp the life out of the myth of “thrown clear and survived.” Let’s look at a runway loss of control accident where the airplane is going 50 knots when it slams into the corner of a nearby hangar and stops within about two feet. An unrestrained human will continue forward inside the cabin until hitting something that has stopped. That may be the instrument panel or the windshield. The windshield will give, and the human will then be “thrown clear,” still traveling at close to 50 knots. No matter what shape the person is in, that human cannot survive slapping against the hangar or bouncing and cartwheeling across the ground. The impacts—a single one against the instrument panel or hangar, or multiple against the ground—cause what doctors refer to as massive blunt force trauma. That means death or severe injury due to damage to the brain and/or destruction of internal organs, most notably the aortic arch.

The most common cause of death in an automobile rollover is an unrestrained victim being thrown from the car. It’s also common for those who were belted in during the same accident sequence to suffer no or minor injuries.

The end of World War II saw the beginning of extensive research into occupant survival in aircraft crashes. By the 1960s Beech, Piper and Cessna were doing full-scale impact testing. Cessna and Piper gave NASA some airplanes for it to crash under varying conditions—one such test is shown above. The results of the testing and the impact dynamics models developed from them were to find more effective ways of keeping occupants alive in crashes.

Put simply, the testing demonstrated that: The slower the impact, the better (force of impact is a squared function). The longer in time and distance the deceleration can be spread over, the better (airbags use this fact). The more impact load that can be absorbed by progressively collapsing aircraft structure so it is not transmitted to the occupants, the better. Occupant restraint is essential—keeping the full torso restrained to the seat during the impact sequence vastly improves the odds of survival. The FAA says shoulder harnesses cut fatality rates by 20 percent and injury rates by a stunning 88 percent. Finally, designing the cabin area in front of the occupants to be free of objects that can hurt them as they go forward during airframe deceleration and the panel comes back due to impact forces improves survivability (airbags also take advantage of this fact).

Aircraft design is a series of compromises. When keeping weight down and cabins small to minimize frontal area to reduce drag and increase speed, the result is that most aircraft have limited “flail space.” That is the area in front of an occupant’s seat in which that occupant’s arms, legs and head are going to flail around during impact.

There’s not a human being on earth strong enough to “brace yourself” against flailing. If there’s something to hit in that flail space, the occupant is going to hit it hard.