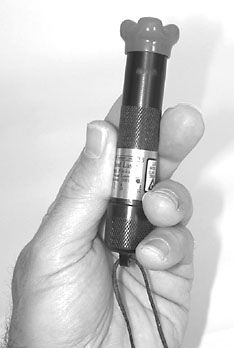 As part of a minimal aircraft survival kit, signaling devices of some kind are a must. Mirrors are effective but only primarily only during the day and many owners are wary of pyrotechnics.

Thats why we were so impressed with Greatland Lasers prototype Rescue Laser Flare which we first encountered in 1999. The concept has incredible potential as a nighttime survivor signaling device. Late last year, the company got this device into production and sent us a sample for testing.

Tiny Laser
Although its called a flare, the product is really just a low-power, special-purpose laser. It has a tubular black machined Delrin plastic body measuring 4 1/8 x 3/4 inches and weighs a mere 2.2 ounces. A red plastic lens cap has four protuberances that serve to prevent the Laser Flare from rolling, but once removed theres nothing to keep it from rolling and the small lens cap could be easily lost. Theres a 39-inch lanyard with a business card sized waterproof instruction tag threaded onto it.

The unit is rated waterproof to four feet and seems generally quite robust. We beat upon it mercilessly, dropped it from 10 feet onto concrete and the tough Delrin body and innards stood up to all the abuse with no adverse effects.

Power is from a single 6-volt lithium photo battery (about $7) and battery life is rated at up to five hours. Our test unit exceeded that by about an hour at 70 degrees F. For storage, the replacement interval is five years.

Somewhat counter-intuitively, the battery goes in with the positive end up. The instruction tag makes this clear, but theres no marking on the device and we dont expect the instruction card to last long, as it can be easily ripped off the lanyard.

The basic concept of the Rescue Laser Flare is to modify a laser beam so that it projects a line rather than a pinpoint light source we normally associate with a laser.The red laser beam exits the device with a 4-degree spread. This results in a beam 738 feet long at 2 miles and 3690 feet long at 10 miles.

Wide Swath
The theory is that the expanding vertical line covers a wide swath so the odds that the distinctive signal will be seen by SAR forces are far greater than with a traditional flashlight. Another use is by SAR forces themselves, who can use it in place of a searchlight. The lasers beam will reflect back from any retro-reflective material at a distance greater than a searchlight might cover.

Our initial tests with the prototypes powerful green laser seemed to support the claims, although the concept loses a little in the translation to the real world. The product comes with a piece of self-adhesive retro-reflective material and instructions learning to get the most out of the flare. It isnt intuitive and by using the retro-reflective material, its easy to see how critical it is to move the laser very slowly when scanning for targets. If moved too fast, at a distance, the flash of the laser line is too quick to register on the eyeball.

The laser light, red in the production version, is definitely distinctive and not likely to be confused with anything else. Its perceived as a flash of light similar to that from a signal mirror, but bright red. It will be more likely to attract attention of passersby, on the ground or in the air than would a typical flashlight.

In any area with other white light sources, it also stands out. However, were not sure the distinctive flash adds much for searchers specifically looking for a survivor in a dark wilderness area or empty ocean where any light source will likely be investigated.

We conducted two series of ground-to-air tests. First, four of us in a Cessna 182 attempted to locate Wil and Dan who had positioned themselves in an undisclosed location in the desert. Even though we knew approximately where they were, we were unable to locate the Laser Flare on approach until nearly on top of them.

They were slowly scanning in our direction following the instructed method, but not specifically sighting on us. Once they started sighting with the Laser Flare, we got much brighter and more consistent flashes.

We then dropped off our two assistants at the airport along with the Rescue Laser Flare, a prototype higher powered green laser device designed for ship to surface use (for finding retro-reflective material), and an assortment of flashlights and signaling devices.

As we got further away than 20 miles, they needed their third generation night vision goggles (NVGs) to locate our aircrafts strobe in order to sight on us.Otherwise, we were unable to see anything from them.The Rescue Laser Flare was visible with the naked eye out to 22 miles and with NVGs out to 28 miles. These maximum distances were predicated on knowing where to look. We would estimate that useful range would be half that in most real-world circumstances.

The prototypes more powerful (but still legal) green laser was going strong with the naked eye at 30 miles, which is all we had time and resources to test.The green laser was invisible when wearing NVGs, so that color probably wouldnt make for the best signal for nighttime SAR when crews are using night vision gear. We tested briefly in bright daylight, enough to reach the conclusion that the Laser Flare is ineffective if the sun is in your eyes to any significant degree.

Conclusions
Our most critical finding is that the concept of just scanning the horizon or scanning towards an aircraft without sighting appears to be considerably less effective in practice than in theory, to the point of being nearly useless for ground-to-air signaling. As with a mirror, sighting is essential.

Greatland Laser has since modified its manual and attached card with effective aiming instructions to emphasize the need to sight at the target. Theyve added a sticker printed in the shape of an arrow that includes the text AIM LASER. This is glued to the flare body after assembly so that it lines up with the axis of the laser line.

Greatlands claims of up to 10 miles visibility seem reasonably conservative, based on our tests. We think that the laser flare could be improved with more power while still meeting the safety regulations for this class of consumer laser. Greatland tells us the production devices are 2.1 to 2.8 mW. The more effective prototype green laser we tested was 3.5 mW. The legal limit is 5 mW.

The Rescue Laser Flares advantages are small size, duration, potential range for size if aimed properly and the distinctiveness of the signal. A conventional flashlight is cheaper, easy to use and has good range, but it doesnt stand out quite as well with the non-distinctive white light. Compared to traditional handheld flares, the laser has the significant advantage of much longer duration, as well as being compact and lots safer.

The concept of the Laser Flare is sound and has value but, in our view, it will benefit from design refinement and more development, as is the case with many, if not most first-generation products.

The current price of $90 is high because production is still limited. The guts of the thing arent much more complicated than an inexpensive laser pointer, although the laser itself is more powerful so that its still a reasonable strength after being spread into a line. Placed in mass production, the price should tumble and its a lot easier to make a case for it at one-third the current price, which is where it would likely end up, perhaps even less.

At its current price and in present stage of development, the Rescue Laser Flare isnt in the must-have category but its also hardly out of reach for those willing to spend a little for good survival gear. We think the Laser Flares advantage are worthwhile.

It seems most applicable to water survival where nighttime searches are the norm and surface search line of sight is potentially not impinged. In most areas of the mainland U.S, nighttime aerial searches are rare and thus the value is significantly less. Above the tree line or in generally open areas, such as the desert or plains areas, its more applicable and potentially useful.