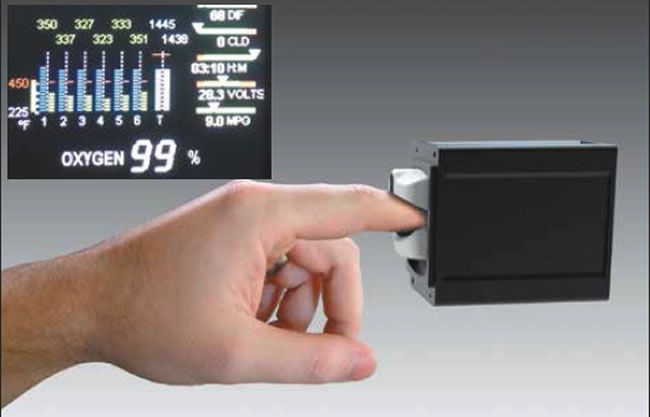 The Guardian Aero455 panel oximeter might not have been invented if company founder Ash Vij didn’t find himself crossing the Rockies in his Cessna 206 without a pulse oximeter. He knew the status of his oxygen supply, but was pretty interested to know his blood saturation. Vij is convinced that his panel oximeter is the cure-all for misplaced portables.

Many features in the $999 Aero 455 were born from the Aero452 CO detector, with an added RS232 databus, older Bluetooth technology and a cabin pressure sensor and alerter system. The device made its debut in the Cessna Corvalis TTx, where it interfaces with Garmin’s G2000 integrated avionics. It’s also FAA-approved for retrofit.

Form Factor
The oximeter is mounted in a metal housing that measures 2.5 by 2.5-inch chassis has a round bezel for mounting in a 2-inch instrument cutout. To ensure accurate readings of the CO sensor, the device has an inlet fan to draw in cabin air.

Optimally, the device should be located in an area that both the pilot and copilot can finger it, but that might require cutting the panel if an instrument hole isn’t available.

The Aero455 measures blood oxygen saturation levels (SP02) between 70 and 100 percent and measurement is taken like any other finger oximeter. Simply stick your finger in the sensor and hold it there for about 10 seconds while the device shines light through the blood vessels of the fingertip. Compatible displays will indicate the measured SP02 and heart rate.

The system is compatible with the company’s Aero55, a $300 device that can function as a dedicated display (and has an amber CO warning annunciator and LCD CO level readout). It too requires a 2-inch panel cutout.
For monitoring passengers, the system comes standard with integral Bluetooth and interfaces with the Nonin Onyx 9560 wireless pulse oximeter, a clinical/industrial portable model that’s sold by Guardian as the Aero901 for a hefty $450. The unit isn’t compatible with the high energy or so-called Smart Bluetooth-equipped NoninConnect model. It’s priced at $219 and is targeted at aviation and sports use.

While the Guardian outputs to a display on dual channels (one for the panel-mounted oximeter and one for the Bluetooth-received oximeter data) Guardian says that most displays will only show one reading at a time due to the limited screen space. Without Bluetooth Smart, the Aero455 is limited to connecting with one sensor at a time.

Compatible certified and experimental displays include the Garmin G3X and G3X Touch, G1000, G2000 and G900, the Grand Rapids Sports, Horizon HX-series, Advanced Flight Systems PFD and the Electronics International MVP-50 and CGR-30 series engine monitors. It also works on the JP Instruments EDM730/830 and EDM900/960 primary display color monitors. Guardian advises to check with each manufacturer at the time of installation to be sure the current software is compatible.

As for installation, the Aero455 connects with third-party displays primarily through an RS232 serial interface. Guardian told us installation times will vary depending on the existing wiring and required panel work, but expect a basic installation to take roughly one day.

Cabin Altitude Nag
The Aero455 has an integral carbon monoxide detector that measures the presence of CO between 20-999 PPM (parts per million). The system can be wired to a remote annunciator light for CO warnings.

The alarm level is calibrated to provide a visual alert within five minutes or less whenever the carbon monoxide level reaches 50 PPM or greater. The warning time is shortened at higher levels of CO concentrations and becomes instant should the carbon monoxide level reach 400 PPM or greater. Additionally, there is a headphone audio output that reminds you to periodically check SP02 based on the cabin altitude.

The built-in pressure compensation sensor detects cabin altitude changes up to 25,000 feet and signals to the remote annunciator and headphones when the cabin altitude climbs above 10,000, 12,500 and 14,000 feet. The idea here is to monitor potential cabin pressurization failures and to remind you to stick your finger in the panel oximeter.

The detector should be returned to Guardian at the end of its five-year service life for replacement and calibration of the CO sensor to maintain airworthiness of the unit. The main reason for replacement of the sensor is the degradation of the sensor and dirt accumulation over the years. It’s returned within five days and comes with a fresh 12-month warranty for a flat fee of $150.

Aircraft manufacturers are beginning to recognize at least some benefit to offering the Aero455 as standard or optional equipment. It will soon be available in the Piper Matrix, and Guardian hinted at a total Bluetooth interface that’s in the works for new Cirrus models.

Guardian is currently taking preorders for the FMS650, a connected cockpit product that has integral USB chargers, CO detection, plus Smart and traditional Bluetooth transceivers that send engine and GPS data to tablet apps, including the WingX Pro7, Garmin Pilot and ForeFlight, to name a few, in addition to its own Pilot FMS app.

We’ll have a look at the FMS650 when it’s available, but at first blush it promises to have a more modern biometric feature set, better Bluetooth connectivity and more efficient monitoring and display capability than the Aero455. It doesn’t, however, have a built-in oximeter for those times when your portable is not to be found.