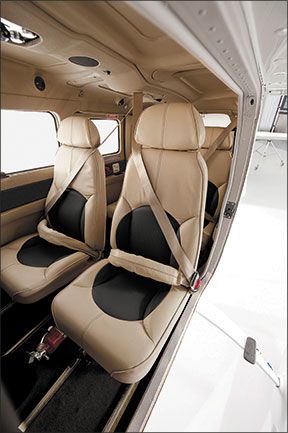 Goodness knows, there are a lot of ways we can spend money on improving our airplanes and plenty of folks who will promise us the moon in terms of performance or glitz or impressive panel displays. Many times the sales promotion includes a claim that the product makes the airplane safer. But which products do? New paint? Hardly. Glass panels? No proof, yet. Retrofit shoulder harness? You bet.

Deciding what hardware can make an airplane safer starts out with risk assessment. Somewhat simplified, most general aviation accidents are due to something the pilot does or does not do—the airplane usually behaves itself. Most commonly, the pilot blows a landing and runs off of the runway or tries to go around and hits something. Those runway loss of control (RLOC) events are more often injury accidents, rather than fatal—the variable is impact speed.

The killer accident for general aviation is VFR into IMC. Impact speed is often at cruise or higher and is usually not survivable regardless of crashworthiness. With that background, the obvious steps for an owner to take are a combination of accident prevention and aircraft modification to improve crashworthiness.

Before spending a cent on the airplane, the way to reduce the risk of getting hurt in it is to buy some recurrent training, especially takeoffs and landings in crosswinds.

Survival
After doing all we can to reduce the likelihood of an accident, the next step is to increase the probability of surviving if something goes terribly wrong in spite of ourselves.

While post-crash fires are not terribly common (except in Hollywood), egress speed does matter because if there is a fire, it usually starts relatively small and takes a little time to grow. The explosions we see in movies usually are associated with high-speed impact and even then, they tend to “flash over” with the initial fire being localized, giving time for an awake occupant to get out of the airplane.

Whole-airplane ‘chute
When something goes bad in the air, the increasing availability of whole-airplane parachutes has meant lives saved. We won’t haggle over how many; we’ll just note that because the force of impact is a squared function, the slower an aircraft is going when it hits something, the better.

Ballistic Recovery Systems (BRS) makes retrofit systems that weigh between 28 and 85 pounds and cost from $4600 to $15,000 before installation. They are installed in the baggage compartment.

Currently, only a few airplanes are eligible for retrofit—some LSAs and the Cessna 172 and 182—although the list should expand. We reviewed whole-airplane parachutes in depth in the September 2013 issue of Aviation Consumer.

Crashworthiness
Research since World War II has taught a lot about airframe crashworthiness—protecting an aircraft occupant during an impact sequence. Simplified, the lessons learned are: The slower the initial impact, the better. The longer in time and distance the deceleration can be spread over, the better. The more impact load that can be absorbed by a progressively collapsing aircraft structure and not transmitted to the occupants, the better. Occupant restraint is essential—keeping the full torso restrained to the seat (via seat belt and shoulder harness) during the impact sequence vastly improves the odds of survival (the FAA says shoulder harnesses cut fatality rates by 20 percent and injury rates by a whopping 80 percent). Designing the cabin area in front of the occupants to be free of objects that can hurt the occupants as they go forward and the panel comes back in an accident improves survivability.

Knowing that information, what is available for retrofit that can improve our odds during impact?

Restraints
The obvious—and most important—solution is restraint systems. A seat belt by itself allows the occupant to jackknife, with a high risk of head impact on the panel or the seat frame in front of you. And let’s make it very clear right now, it is impossible for you to “brace” yourself to keep your head off the panel if you don’t have a shoulder harness—the impact forces will either overpower you in an instant or snap your locked elbows, adding to your injuries and stunning you or rendering you unconscious, delaying your exit. Also, the jackknife over the seatbelt can give you a spinal injury that can cause paralysis.

There is not a lot of what is called flail space in a general aviation airplane. Flail space is the area in front of an occupant that the occupant’s body flails around in, uncontrollably, during an impact sequence. If there’s something there, the occupant is going to hit it.

Air Bags
The best solution to restricted flail space is a restraint system that includes a smart air bag that deploys when an impact is sensed. Close behind is a five-point belt restraint system—two lap belts, two shoulder harnesses and a crotch strap that keeps you from submarining under the belts.

For general aviation, the only purveyor of airbag restraint systems is AmSafe. Using either a two- or three-point restraint with airbag, inflator and sensor, the AmSafe system positions the occupant with the restraint and protects against impact forces with an airbag tailored for the shape of the space. The airbag is sewn and folded onto one of the belts; a gas hose runs from the bag to the inflator. A wire runs from the inflator to a sensor that tells the system when to activate. AmSafe’s Lee Langston told us that the system was tested to assure that the pilot’s hands do not get knocked off the yoke should there be an inadvertent inflight activation.

To date there have been none.

AmSafe airbag systems are currently available for retrofit on some