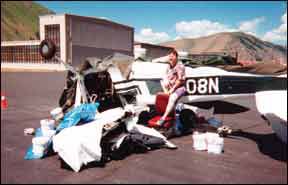 The FAA didn’t get serious about seatbelts until 1978, and even then it was only requiring shoulder restraints for the front seats. Ten years later, they added the rear. Given how long aircraft stay in service, that means there are thousands of craft flying every day with inadequate protection for the most valuable item on board.

If you’re flying with only a lap belt—shame on you. As much as some pilots don’t like having belts over their shoulders, the study data has been clear for decades: 88 percent of injuries and 20 percent of fatalities can be eliminated by adding shoulder or additional restraints over lap belts alone, according to the the FAA.

Hey, I’ve Got Belts
Even if a decent seatbelt system needs to be checked if it’s seen over 10 years of regular service. Webbing that’s torn or frayed should be replaced. This includes the threads that stitch the belts together, which shops tell us is often the first thing to go. Loose threads or thread ends hanging out are red flags.

If your belt hardware is good and you’re happy with the shoulder restraints, what you need is called rewebbing. This can be done by many FAA repair stations, or you can send the belts out for inspection and rewebbing. Prices vary, but budget about $40-75 for lap-only belts and $120-$150 for three-point belts (belt over one shoulder as you’d find in most cars). The price of a couple tanks of gas to ensure your seatbelts work if you ever need them—easy math, in our view.

The seatbelt hardware can wear, too. Common issues can be detachable shoulder restraints that no longer lock securely into the lap belt, and latches that open under strain. Aircraft that see a lot of short flights, such as trainers, are especially suspect. With worn hardware and webbing, it’s often cheaper to buy a replacement for the whole thing. Prices vary widely depending on exactly what hardware and finish you want.

Replacement might be an opportunity to upgrade to an inertia reel, a four-point system (straps over both shoulders) or even an airbag system (see sidebar page 22). Upgrades vary in the time needed, but since some interior disassembly is required, it’s often several hours of labor.

There are three ways to upgrade a seatbelt system on the paperwork side. The simplest is by STC with all the paperwork included. The second is as a minor modification. This can happen when there’s an existing hardpoint or framework where the seatbelt can be attached. AC 23-17B (page 105) makes it clear that this method is acceptable for aircraft manufactured without shoulder restraints. The third method is by field approval, which is required if any welding or drilling is involved.

Many local shops have the authorization and ability to repair your existing belts or find STC kits for you, but here’s a rundown of what’s out there so you can be a more informed consumer.

AmSafe and BAE (Schroth)
AmSafe supplies the seat restraint components for most major OEMs and about 65 percent of the aftermarket seatbelts. They don’t sell retail, but if you just head for your local service center and ask them to redo your existing belts or replace them with new ones, it’s likely you’ll get AmSafe parts. Prices for those parts vary with the shop selling them, but our research shows they are on the high side of aftermarket seatbelts. AmSafe doesn’t offer any STC systems directly.

Schroth Safety products is now part of BAE systems and can be thought of as the German AmSafe. They manufacture belts for many industries and are widely regarded as making quality products. They hadn’t responded to our queries by press time, but they do make systems that could be installed under a field approval or as a replacement. We don’t know of any STCs, however.

Aero Fabricators
The company is a division of Wag Aero that rewebs old belts and supplies new ones. They stock eight colors and can do three-inch military-style belts found on many aerobatic and ag aircraft. If you’re completely replacing the old belts, they offer static (non inertia-reel) two-, three-, four- and five-point systems. As with almost all of the belt companies we talked to, the parts are TSO/PMA belts that should be a legal replacement for many existing systems.

For aircraft with no shoulder harness, or for those looking for the added safety from a four-point harness, Aero Fabricators offers upgrade kits via STC. These are Y-type four-point systems, meaning the shoulder belts are attached at a single point with one strap that splits into a Y-shape to go over each shoulder and connect to a lap belt. They cover common Cessna 100 and 200 aircraft, cloth-covered Pipers, as well as the PA-24 and PA-28 series, Beech 35s, and some Stinson and Aeroncas. Kits range from $170-$299 per seat. PA-28s are $496 for a front seat pair. The systems are front and rear for tandem aircraft, but only the front for others.

John Armes, who oversees belt repair and new manufacture as part of his duties at Wag Aero, tells us they have gotten many shoulder harness systems into other aircraft under 337 field approvals. It’s particularly easy with a cloth-covered aircraft because there’s usually a steel tube somewhere convenient to attach the Y-strap. For aluminum aircraft, it can be more difficult, or even impossible to find a suitable attach point (especially for shoulder harnesses in the rear seats).

Alpha Aviation
Alpha Aviation sells both replacement seatbelt equipment and aftermarket upgrades to three-point belts using AmSafe equipment. The replacements cover much of the Cessna 100- and 200-series aircraft, almost all of the Mooney line and inertia reels for many Pipers that had factory inertial reel systems. Black, grey and tan (fawn) belts are stocked, but custom colors are available for no extra charge. Inertia reel shoulder belts run under $350 per seat, making them a reasonable option to upgrade an aging factory-installed static system.

Aircraft Belts
This company makes the reweb or replacement process about as easy as possible with an excellent online ordering system for both options. There are 30 standard colors and a few buckle types to choose from. with custom colors or specialty items (like gold plating) available on request. If you’re rewebbing, they make it easy to order a bit more (or less) seatbelt length in the process.

Prices are a bit higher than average, with a three-point system running just under $150, but the ease of ordering and selection may make a slight premium worth it. Aircraft Belts does not offer STC’d kits to upgrade old lap belt systems (although they make the three-point upgrade kit sold by Cessna). Their equipment could be installed under a field approval, of course.

They also build custom systems for experimental homebuilt aircraft, again with competitive prices. A custom three-point static system might be $160. A five-point with a rotary release could run over $500 however. The company uses components from other major seatbelt makers, such as AmSafe and BAE (Shroth).

BAS
BAS is a family company in Washington State (call and you’ll likely get Jim Mettler Sr. or Jr.) specializing in four-point upgrades for the front seats of many Cessnas, Beeches, Pipers and the Luscombe 8-series. Installation time ranges from two to 10 hours.

Much of the BAS system is AmSafe equipment. These are inertia-reel systems and are sold in pairs of two seats at $1100-$1300 for the pair. This is more expensive than a three-point system, but also more protection. The company has some impressive wreck photos with testimonials on their website. The belts can be ordered with the shoulder straps fixed to lap belt sides, or as a slide-on type that becomes four separate straps on disconnect. A rotary buckle can be ordered for $350 extra.

BAS also sells three-point, static systems for the middle and rear seats for aircraft that have factory hardpoints, such as the K-R modes of Cessna 210 and post-1971 Cessna 172s. These are $395 per pair. They don’t advertise this product, so you have to ask for it. The company has done custom work for Beavers and Helio Couriers as well.

Hooker Harness
Hooker Harness has long been a favorite of the experimental, aerobatic and warbird community. They also do some OEM work. If you’re lucky enough to fly a new Waco biplane, that’s a Hooker harness.

The company offers STC kits for static four-point systems in most high-wing Cessnas for $225 per seat. They also offer four- and five-point STC’d static systems for the Aeronca Champ and its derivatives for $200-$280. They do have inertia reel systems, but only for experimentals.

Hooker also offers their $55 quickie harness for lap-belt-only aircraft. This is actually Y-strap that has loops on all three ends. You thread the rear seat lapbelt through the single strap’s loop and tighten. Then you thread the two halves of the front lap belt through two forward loops and climb in. This effectively makes a shoulder restraint anchored by the rear seatbelts. It also makes the rear seat unusable for passengers, but many owners don’t use them anyway. Because the Quickie isn’t permanently attached, there’s no paperwork at all. Co-owner Scott Mc Phillips says it’s popular with ferry pilots flying aircraft without modern seatbelts.

Kosola and Associates
If you’re flying a Piper product, you can get three-point systems with either static shoulder belts or inertial reel from Kosola and Associates. Their STCs cover the J-3, PA-11, -12, -24/30 and -28. A nice plus of the Kosola STC is that they cover both front and rear seats in almost all models.

The systems are pricier than most, running $428-$550 per seat for static shoulder harnesses and $672-$840 for inertia reels and black webbing. Custom colors are $50 more per seat. If you order for certain kits, such as the PA-24 Comanche, you have to know the serial number and rivet pattern before you order. Diagrams are on their website. The company says installation times are often about four hours.

Worth the Money
Pilots rarely think about seatbelts other than as startup checklist item number two. But worn belts are a risk with no accompanying benefit, given how reasonable rewebbing a system can be. Even if hardware has to be replaced, we think it’s a no-brainer to make sure this basic safety equipment is up to the potential challenge.

We also think that any seat regularly occupied by humans should have a shoulder restraint of some kind if at all possible. Our pick would be an inertia reel, four-point system, and for this reason we like BAS. But anything that improves your odds of walking away from a bad day is money wisely spent.