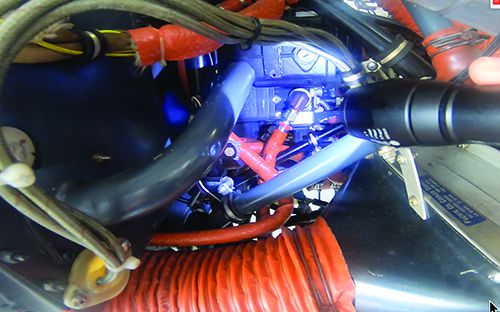 If your airplane doesn’t get an oil change between annuals—and many don’t—it’s likely that the engine cowl stays put for an entire year. Your only view of the engine room might be through the oil access door or the inlets.

Although our review of the accident record doesn’t reveal engine failure as a high risk, it’s still a risk and some failures could have been prevented through simple engine inspection.

On my Cub—now entering its 82nd year of service—about every 10th flight I remove the top and bottom cowl, grab a flashlight and a rag and have at it for 10 or 15 minutes of minute inspection, with another 15 minutes reserved for the rest of the airplane. Based on mechanical failures our research revealed, here are some things to check.

Oil and fuel fittings and lines—These come loose or chafe and if they’re old, the outer layers become brittle and cracked. If you have an oil cooler, check the inlet and outlet fittings for cracking.

Cylinder bases— Are all the nuts in place? I once found one missing on a four-cylinder Lycoming. Check the base-to-crankcase mating for signs of oil weepage. And have a look at the crankcase split for signs of excess weeping.

Rocker box covers— Are all the screws in place and tight? These screws sometimes have drilled heads for safety wiring but I don’t see that done very often. Some have star washers and those should be in place. A loose screw or two can cause enough oil loss to, at minimum, trash the engine compartment. At worst, cause a fire or loss of lubrication.

Check the pushrod tube seals for leakage at both the cylinder head and crankcase end. Also, is the oil filter safety wired and is there any leakage around the base?

Magnetos— Simple as they are, magnetos rarely fail, but more often, they simply fall off the engine for lack of secure mounting. The Bendix dual magneto found on some Lycomings is notorious for this. Give the magneto a shake to assure its security. And remind yourself to do a P-lead check by shutting the engine off with the ignition switch. If it doesn’t quit, the P-lead is open.

Ignition leads—We didn’t see any of these implicated in accidents, but nonetheless check that they’re properly routed, secure and not chafing. And remind yourself to check when they were last replaced.

Alternators—Alternator failures might not lead to engine failures, but have resulted in accidents due to loss of instruments and nav equipment. In one fatal accident, a Continental alternator drive coupling failed and pieces of it tanked the entire engine. The part can’t see seen on preflight, but belts driving alternators can be, as can the security of belt and accessory case-mounted alternators.

Turbochargers— If you have one, check the oil lines for security and leakage, with special attention to the fittings. Give the thing a shake to see if it’s secure and check the exhaust plumbing for any signs of leakage, as evidenced by gray streaking. If in doubt, have an A&P check it. Give the cold side induction hoses a careful look, with special attention to the clamps. If one blows off—a fairly common occurrence—it won’t fail the engine, but it will get your attention, especially at high altitude.

Throttle, mixture, prop and carb heat cables—These are among the most bulletproof components in the engine compartment, but when they fail, it’s often because the cable end fitting or clamp screw comes undone. Check tightness with a wrench or screwdriver and if it’s supposed to have a cotter pin, make sure it does.  Check the carb heat box for cracking, a common wear point.

Fuel vents—These aren’t in the engine compartment, but out on the wing where the tanks are. Insects love to clog them with mud and dirt and one or two such incidents turn up in every accident sweep we do. It can be an acute problem for aircraft stored outside.

Air filter—They don’t last forever even though owners seem to think they do. Shreds of ancient paper air filters have choked an engine or two, so make sure yours is sound and maybe installed after the turn of the last century.

Baffling— Although not implicated in any engine stoppages, engine cooling baffling often doesn’t get the attention it needs and some of it is pretty ratty. If yours is, just replace it.  It’s not expensive and the engine will run better for it.

If all of these things seem obvious, they apparently were not to the pilots who suffered engine stoppages because they failed to simply check them on preflight. If in doubt, leave the engine uncowled and have an A&P give it a once-over.