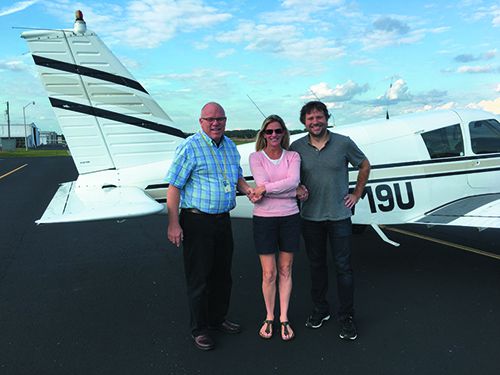 Over the last several years of observation, we’ve generally been pleased with the manner in which implementation of the Airman Certification Standards (ACS) for each certificate or rating has brought more standardization and objectivity to practical tests. We remember the bad old days of sending pilots for checkrides with Designated Pilot Examiners (DPE—individuals not employed by the FAA but having completed FAA training and designated as a pilot examiner) when it was essential to cater to the whims and quirks of a particular DPE.

We are of the opinion that the ACS concept has made it much clearer to applicants as to what they must know and do—and to what standard—on a practical test.

To find out, we sat down with Catherine Cavagnaro, proprietor of Ace Aerobatic School in Sewanee, Tennessee, who is a DPE on top of being a professor of mathematics at the University of the South and recognized as the 2020 National Certificated Flight Instructor of the Year by the General Aviation Awards Program. (That’s her in the picture between FAA inspector Jim Bostrom on the left and brand-new instrument pilot Greg Bieck.) We wanted to know what a DPE looks for on a commercial practical test, especially as opposed to the other VFR practical test that a pilot may have taken—the private.

“We’ve all heard that the private pilot ticket is the license to learn,” Cavagnaro told us, “so I’m looking to see that the private applicant can safely go out and continue the educational process. For the commercial certificate, I want to see a pilot who demonstrates a mastery of the airplane while showing a consideration for the comfort of passengers.

“The pilot should smoothly and authoritatively guide the aircraft while multitasking—looking for traffic, keeping passengers comfortable and maintaining positional awareness.”

Cavagnaro gave an example of the level of smoothness expected of a commercial pilot: “On a private pilot flight test it’s pretty common for the pilot to do a brake test so hard that it throws the passengers against the shoulder harness. A commercial pilot should do it as you do in your car, apply the brakes and then ease up so that the airplane comes to a stop smoothly and slowly.”

She went on to talk about the little things that are expected of a commercial pilot such as not shoving the constant-speed propeller control forward while on downwind. “It makes a lot of unnecessary noise and can upset passengers and certainly upset people who live around the airport. Wait until the manifold pressure is low enough that the propeller isn’t governing so there’s no change when the prop control is moved forward prior to landing.”

We discussed the commercial pilot requirement change to allow 10 hours of training in a Technically Advanced Aircraft (TAA) instead of a complex airplane and asked how that has changed the practical test. She told us that since the FAA also dropped the requirement to bring a complex airplane (or TAA) to the practical test, she doesn’t often see applicants show up with a TAA. “Even when they do,” she commented, “there’s not much in the ACS that makes a difference in the flight test as to whether the airplane is a TAA.”

That brought up the endorsements that must be in an applicant’s logbook. Cavagnaro told us that she sometimes cannot give a checkride because the applicant shows up without the appropriate endorsements in her or his logbook or with aircraft logbooks that don’t have signoffs for required maintenance. She said that by the time a pilot is going for a commercial certificate, that pilot should know the FARs well enough to make sure that all the required endorsements are in place.

Cavagnaro said that she expects applicants to be able to fly the maneuvers, such as the chandelle, lazy 8, and power-off 180/spot landing smoothly, while watching for traffic.

A common problem on the power-off 180 is adding flaps too early, she advised. When the airplane is clean, a slip is more effective and demonstrates a mastery of the airplane. She also said that if a pilot is a little sloppy on a chandelle or lazy 8 because he or she is looking for traffic, she prefers that to the pilot who does them perfectly but isn’t paying attention to the world outside.