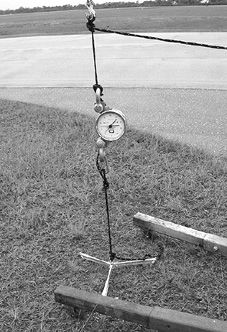 Tieing down in a remote location is always a nuisance for the simple reason that theres little decent hardware to do the job effectively. At OSH and other shows that require tiedowns, the popular solution is the standard K-9 auger meant for keeping Rover from roving. But our tests show that the augers dont hold much and are usually difficult to bore into the ground.

At Sun n Fun, we saw a new tiedown product from Hunting Solutions called the The Claw. As shown in the photo below, it consists of a folding tri-pod gizmo that rests flat on the ground. Three beefy, pointed bolts are driven through guide holes in the end of the arms and angled toward the center; the rope attaches to an eyelet where the arms intersect in the center. The kit includes three tri-pods, the bolts, some rope and even a small hammer at a retail price of $119.

The company claims The Claw will resist up to 1600-pounds of vertical pull in dry, hard soil but pull resistance depends entirely on soil characteristics, which vary enormously.

When we tested it in sandy Florida loam after a morning of heavy rain, it resisted about a 500-pound pull. When it failed, The Claw lifted a giant plug of dirt with it but the device itself remained intact with a vertical pull.

When things dried out, we tried again, using the angular pull more typical of the way pilots actually tie airplanes down. We recorded pull resistance of just over 475 pounds before one of the arms broke. (In similar soil, a K-9 auger resisted 270 pounds before bending and pulling out.) Our advice is this: if youre going to use The Claw, secure it directly under the tiedown ring, not at an angle. It will have higher resistance and be less likely to break.

As we reported in our May 2001 issue, pull resistance for tiedowns should be at least 2600 pounds, something thats just not achievable with a portable system. Given the inevitable compromise, the more pull a portable can resist, the better.

We found that The Claw was easier to install and remove than a K-9 auger and we like the cloth carrying bag the kit comes in. We think The Claw is comparable to-and a bit cheaper-than Fly-Ties, another portable tie-down system that operates on the same principle which won top honors for our last review of tiedowns.

Worth noting is that for angular pulling, Fly-Ties resisted 900 pounds but in hard, moist soil, not loam. The Fly-Tie rods were bent and twisted during our tests. We werent able to test both products in identical soils.