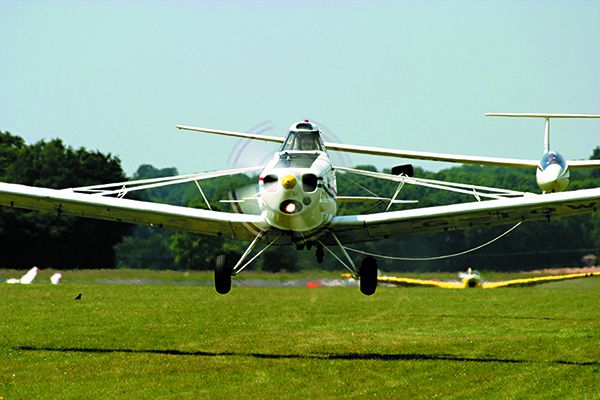 Getting a glider into the air is a community affair—assistance is required. While a launch can be carried out via a winch and a long cable or a car and a long cable, by far the most common method is to use an airplane and a 200-foot nylon rope to launch the sailplane.

That means that someone has to fly the tow plane—which just might mean that spending some weekend days yanking gliders into the sky would be more fun for you than going for $100 hamburgers. Plus, towing gliders is one of the very few types of flying a private pilot can legally do where someone else pays for the cost of the airplane. You get to do some pretty cool flying and it doesn’t cost you a cent. If you’ve got a commercial ticket and a second class medical, you can even get paid.

What’s involved? First, the regulatory hoops: You need a private pilot certificate and 100 hours of flying time plus a glider tow checkout and endorsement. (There is a recurrent training requirement.) The tow plane may have enough power to require a high-performance endorsement and if it has a tailwheel, you’ll need a tailwheel endorsement. The relevant parts of the FARs are 61.31, 61.69, 61.113 and 91.309.

The Soaring Society of American (www.ssa.org) has a boatload of reference material, including some excellent videos, on towing.

A tow plane needs power, ability to climb while pulling a load—and to keep the engine cool while flying at indicated airspeeds as low as 60 MPH. It also needs good visibility to keep track of all the gliders that may be in the air nearby during tow, excellent low-speed control authority because the glider can yank the tow plane around in turbulence or if the glider pilot is a hamfist, enough fuel capacity that it doesn’t require stopping after every third tow and a comfortable pilot seat because the pilot may spend many hours in it during a day.

Currently, the most popular tow planes are ag planes from the 1960s and ‘70s, notably the Piper Pawnee and Call Air A-9. They have great visibility in three-point (and steep climb) attitude, excellent low-speed control and good ground handling—as tailwheel airplanes go. Previously popular airplanes such as the 150-HP Citabrias and Super Cubs are less popular now because they’ve gotten so expensive. The cost of insurance in a “hard” market is raising its ugly head—driving up the price of tows (we’re seeing about $45 to 3000 feet) as well as starting to bring more nosewheel airplanes into the fold. The Cessna 182 has long been a good tow plane, although it is not nearly as “cool” as a 180 or Pawnee, but it’s much less expensive to insure and avoids the problem of locating tailwheel tow pilots.

A typical day of towing starts with servicing and preflighting the airplane and inspecting the tow rope. You’ll probably fly off of grass as it doesn’t abrade the rope as much as pavement. You’ll taxi into position about 180 feet in front of the glider while the ground crew hooks up the tow rope. Once that’s done, you’ll follow one of the many hand signals you’ve learned to taxi forward and take the slack out of the rope.

In position, you’ll check for traffic as the lead ground crew person does the same and lifts a wing of the glider to hold it level. Once the glider pilot is ready, she signals the wing runner, who signals you that everything is ready, and you move the throttle from quiet to noisy over about three seconds to keep the initial movement of the airplane and glider smooth.

The glider will break ground fairly quickly, and should level off at about three feet, to avoid pulling the tow plane’s tail up. Glider pilots aren’t perfect, so you have a tow rope release knob also and can dump the rope and glider should things go south—and they will from time to time, so don’t get complacent.

Once you lift off you’ll need to hold the appropriate speed for towing the type of glider behind you—and nail it within 5 MPH. Glider pilots have been known to make a speed-sloppy tow pilot’s life miserable. During climb, you’ll keep turns shallow, while taking advantage of any thermals around, and maneuver to be positioned at the desired location relative to the airport upon reaching release altitude.

You’ll feel the glider release (most of the time), at which point you’ll turn left as the glider turns right. Once you confirm that the glider has released, you set the prescribed power for the descent, lean the mixture aggressively and make like a rock while banking frequently so that you can see all around you and avoid other aircraft.

Fitting into the pattern often requires a combination of complying with local procedures and guile as you keep things in tight while hustling back for your next launch. Once on final you’ll hold no more than 1.3 Vso while remembering that the rope hangs about 50 feet below you. Then it’s a matter of hitting your touchdown spot, rolling into position in front of the next glider with a minimum of fuss—and doing it all again.