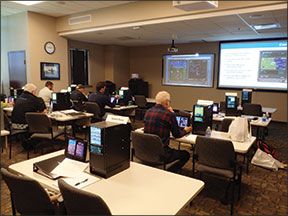 in the Garmin GTN navigator owner survey (March 2013 Aviation Consumer), some respondents dinged the product for having a steep learning curve. Moreover, we heard from owners who took Garmin’s factory training course, commenting that it was too short—and fell short—when it came to mastering some of the subtleties of the system’s feature set.

Garmin recently extended the length of the $525 course (that’s only offered at the company’s Olathe, Kansas, support and training center) to accommodate a full two-day curriculum. They’ve also added the G500 primary flight display interface to the training.

To see exactly what the course covered and to gain a sense of whether it’s worth the effort and cost, we traveled to the Garmin factory and completed the training program. We found it both comprehensive and fast moving.

Diverse Student Body
Don’t be fooled into thinking this course is attended by amateurs. It’s quite the opposite, actually. Our course included nearly a dozen students with diverse backgrounds, including some professional pilots. There were retired airline captains, corporate pilots and aircraft owners with years of flying experience. Some built their own aircraft and installed their own avionics.

“I’m here after flying my twin Cessna into inadvertent IMC, late at night, with a freshly installed Garmin package. After a near-auger, I knew that I needed to get structured training,” said Mark Hangen, a pro with years of experience flying a variety of corporate-caliber aircraft.

“As an old grayhair, this stuff is tough to learn on your own,” said another pilot with a complete Garmin suite in his P210. He also brought his copilot to the training.

The class was led by Garmin’s Christopher Benson, an easy-going and patient product trainer with airline flying experience. Benson was armed with two full days’ worth of material to present, and there was little down time. Students follow along with Benson, who presents the material on two large monitors at the front of the classroom.

The training center is collocated with Garmin’s technical support center that staffs a diverse group of product support engineers (all are pilots). This allows most installation and interface-related technical questions that come up in the class to be answered by folks who understand the product line inside and out. The class also includes a tour of Garmin’s manufacturing floor, plus a generous serving of food (including dinner) to fuel the brain. As a bonus, Garmin raffled off the latest Nuvi portable GPS, complete with a lifetime data subscription.

On each student’s desk is an actual GTN750, GTN650 and G500 system. These systems run special demo software that enables the user to enter position, speed and altitude data for desk-flying procedures. As dry as avionics training can be, the live equipment adds a certain level of gee-whiz factor to the experience. It also allows students to venture into the operating logic at their own pace.

Two-Day Cram
This is the second year Garmin has offered the training. While it originally started as a GTN750/GTN650 navigator stand-alone course, Garmin found that many GTN users also have the G500/G600 PFD/MFD system installed in their aircraft. As a result, they added another day to the course to concentrate on both systems.
The first day of the class focuses on the G500/G600 primary flight display and multifunction display operation.

While the training touches on abnormal procedures, such as ADAHRS and potential LRU failures, it’s not enough to prepare some users for dealing with real-world component failures, in our view. The curriculum does, however, cover the critical components in the system, so students can learn basic theory of operation while using the course as a stepping stone for pursuing more in-depth knowledge of potential failures.

Since many of the users who are new to the G500 are also new to flying with a glass PFD, Benson spent some time discussing the transition from round gauges to a speed and altitude tape presentation. You can’t, of course, learn this transition in a classroom, but Benson offered useful tips for those learning the technology.

The G500/G600 training included the use of synthetic vision, or what Garmin calls SVT, for synthetic vision technology. There really is a right and a wrong way to use synthetic vision, and the course covers it.
Each student receives a training manual that contains more in-depth information on system components. The manual is also, for the most part, an outline of the entire course. We found it to be concise and helpful for following along during the fast-paced presentations.

Another aspect of the interface that the course doesn’t address in detail is autopilot connectivity. This, however, is difficult to cover because retrofits differ drastically from one to the next. Seemingly, there’s a different method of user interface for every brand and model of autopilot.

For instance, a lengthy discussion developed over how to program the equipment to couple with a GPSS steering system. Even users with the same model of autopilot had slightly different switchology installed in the aircraft. That’s where having access to product support engineers came in handy. Still, it proved that programming the autopilot is a big source of confusion.

During the latter part of the first day, the course covers the basic functions of the GTN units. This includes radio tuning, basic menu structure and other rudimentary functions that may seem trivial, but provoked more questions than we expected.

Since not all students have the flagship GTN750, Benson made it a point to also demonstrate the slight operational differences of the GTN650, when appropriate.

Flight Planning
The second day of the course is focused completely on the GTN navigators and in particular, learning how to flight plan. Although some of the students didn’t have a G500 installed in their aircraft, it was helpful to have the system connected to the GTN to utilize the electronic HSI.

One of the common stumbling blocks for those new to the GTN is learning how to properly program the navigation source CDI output (VLOC and GPS). Benson thoroughly covered this critical function and also demonstrated the usefulness of the system’s OBS mode.

Using real-world scenarios, including dealing with an ATC diversion from a loaded flight plan, students learn how to use the GTN map display and graphical flight planning to quickly get the aircraft going where ATC wants it to go, while reducing heads-down time fumbling with the box. Users that are new to the GTN might think of the map display as pictorial of where the aircraft is, but the course teaches that it’s far more than that. Instead, it’s a critical part of the interactive user interface, including flight planning.

The second half of the last day is spent covering departure, arrival and approach procedures. This is the part of the course where you’ll want to pay close attention.

Again, Benson used real-world scenarios. For example, one exercise included building an entire flight plan, including the loading of a departure procedure, loading transitions, intercepting an airway, loading an arrival procedure and then loading and activating an approach. The exercise also included changing the flight plan on the fly—a task that users simply need to know cold. This includes programming and flying the missed approach.

Certificate To Learn
In our estimation, that’s exactly what the completion certificate that hangs on the wall means. That’s because the course alone can’t come close to making a pilot proficient in operating a GTN and G500 in the real world. Further, there’s so much to know about these systems that you’ll need to operate them on a regular basis to retain the information presented in the course.

Still, we think the course succeeds for what it’s intended to do and that’s to make students feel more confident operating the equipment in the cockpit. We think the classroom environment is a good place to learn more advanced functions without the distraction of having to fly the aircraft.

Saying that, what might make the course better? We spotted a Frasca simulator in the back of the training room. If it were fitted with the equipment that was used on the desks, it might step the training up to another level. Then again, that would require more time—something that’s already tight—even in a two-day session.
Benson said that it’s possible that Garmin may eventually take the course on the road so students won’t have to travel to the factory. On the other hand, we think the factory visit enhanced the experience. If you’ve never visited Garmin’s Olathe operation, we think it’s worth the trip.

“We really want the customer to feel confident when operating this equipment. Our goal is to help customers feel comfortable enough to perform advanced functions, including programming ATC reroutes, dealing with diversions and loading airways and procedures,” said Benson. For these purposes, we think the course is worth the time and the money, if you can handle a fast-paced learning environment. Contact www.garmin.com, 800-800-1020.