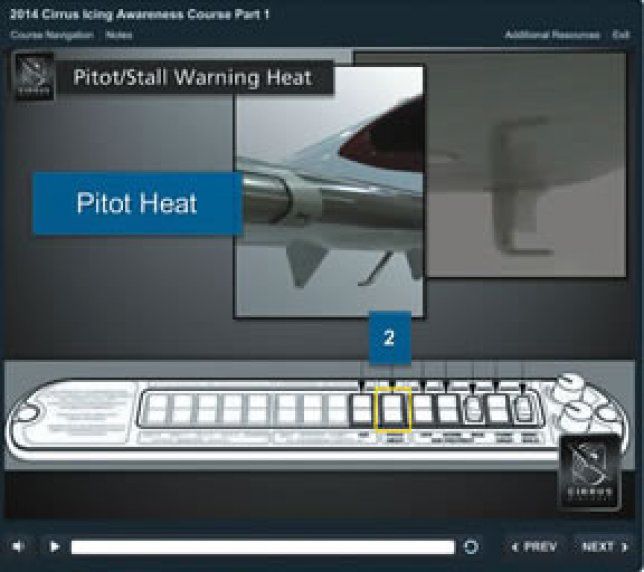 As we researched icing training for owners of non-FIKI airplanes, we generally found that owners of FIKI airplanes could get training in actual icing conditions without too much trouble. Organized courses are not common-although instructors and organizations sometimes include training in actual icing conditions as a part of the checkout process. Also, owners who took recurrent training in their airplanes sometimes worked with their instructors to pick up some ice while doing so.

What we did find as an example of a dedicated FIKI training program for owners and an organization absolutely willing to train in actual icing conditions was Cirrus Aircraft. We were aware of Cirruss aggressive approach to flight training, but only learned about its icing training when speaking with Travis Klumb, the Director of Flight Standards at Cirrus.

Klumb explained that virtually all individual sales of Cirrus aircraft in the U.S. are now FIKI airplanes (non-FIKI generally go to flight schools and overseas). He said that Cirrus wanted a way to help owners learn how to use the TKS on their airplanes, operate in icing, develop strategies for dealing with it, especially under those circumstances where the aircraft will have to be in ice for an extended time.

The intent was to help owners minimize the risks presented by icing both when they were doing preflight planning and in flight. Klumb said that Cirrus is big on real-life training.

Cirrus provides FIKI aircraft flight training in icing conditions in its Cirrus Headquarters Training in Duluth. Klumb told us that for its cadre of Cirrus Standardized Instructor Pilots (CSIP) around the country, it leaves the decision whether to give such instruction up to each individual instructor.

Cirrus also created the Cirrus Icing Awareness Course, on online, interactive icing training program tailored specifically for FIKI Cirrus aircraft. Cirrus is so serious about the value of training and recurrent training that the limitations section of the POH on its FIKI aircraft includes a requirement that the pilot in command have completed the Icing Awareness Course within 24 months before operating the aircraft in icing conditions. It is illegal to fly a FIKI Cirrus containing that POH limitation into known icing conditions unless the PIC has completed the online course within two years.

We went through the course and were impressed. We think highly of the NASA online icing course; the Cirrus course is as good or better. It includes the NASA research information on icing as well as detailed operational info on TKS and its limitations, something not in the NASA course. The course is free to FIKI Cirrus buyers.