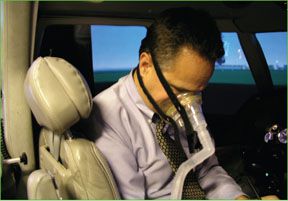 If pilots dont love acronyms, they at least learn to live with them, but heres one you probably havent heard: MEGO. I found it penciled in the margin of a manuscript that had been reviewed by an editor I worked for in the distant past. MEGO means my eyes glaze over and a manuscript so labeled was deemed too boring to even merit further comment.

Articles about hypoxia often go MEGO one better, some substituting nicely for a sedative chased with a glass of wine. Thats to say that pilots-especially those most exposed routinely to hypoxia-tend to downplay its hazards because theyve never experienced it. Despite recent high-profile hypoxia-induced accidents-the Payne Stewart Learjet crash and the Helios Airline crash in Greece-only a tiny fraction of pilots have trained for hypoxia awareness. Bluntly, the risk is not taken seriously.

Flight Safety International has devised what I think is an innovative simulator-based program to address this shortfall. I recently sampled the three-hour course at FSIs Orlando Learning Center. Although Id taken a chamber ride 10 years ago, FSIs program was a revelation.

Lots of N2
To invoke genuine hypoxia in a simulator, FSI partnered with the Mayo Clinic to develop a hypoxia awareness trainer with something called a reduced oxygen breathing device. It essentially exposes the trainee to mixed gas breathing in which the ratio of nitrogen to oxygen simulates the lower oxygen partial pressure reduction of high altitude. Nitrogen content is ramped up to as much as 92 percent, from the 78 percent atmospheric ratio.

Reduced oxygen breathing was developed by Mayo as early as 1936, as part of its considerable experience in aerospace medicine. Digital technology now makes it possible to build an automated computer-monitored reduced breathing system that FSI has installed in six of its learning centers, according to FSIs Larry Schuman. He says the system will eventually be available in all of FSIs facilities. The one we flew was installed in a Level D Citation Bravo simulator.

The point of the training is to provide an alternative to a traditional altitude chamber session so that pilots can experience hypoxic symptoms in the environment theyre most likely to encounter it: the cockpit. Further, it doesnt require a day or more, as some chamber rides do, and there are no post-training flight restrictions. The training can be done as a standalone or in conjunction with other FSI sim programs. Cost is $950 for the three-hour course. That doesnt place it out of reach for the owner of a flight-level-capable piston airplane, but the target audience is turboprop and jet operators.

Class and Sim
Like traditional chamber rides, the training consists of classroom orientation and hands-on training with the equipment, although a simulator is involved rather than the chamber. FSI instructors Johanna Rosser and Eric Dixon took me through the program. Anyone who has taken a chamber ride will be familiar with the theory. Rosser does a brisk review of high-altitude physiology, including the basic gas laws you would remember if youd been awake in high school physics class. (If only youd known youd become a pilot…)

Any pilot can list potential hypoxia symptoms, but can you list them all? There are at least 14 and Rosser says everyone experiences different combinations. Says Dixon, I want to know this: Whats my first symptom, not my strongest symptom. To find out, each pilot goes through two brief hypoxic sessions.

The first is a non-flight segment in which youre fitted with a medical oxygen mask and placed in the stationary sim. By increasing the nitrogen mix, the computer-controlled profile climbs rapidly to the oxygen saturation equivalent of 22,500 feet, where it will remain for up to seven minutes, followed by a rapid return to the surface.

During this profile, the pilot is asked to write down his evolving symptoms and to do serial subtraction problems. In the second session, the pilot flies the simulator with the mask in place and hypoxia is induced at some unknown point, mimicking insidious pressurization failure. Having learned his symptoms, the pilot is expected to respond automatically: Immediately don a mask with supplemental oxygen and begin an emergency descent. Worry about the pressurization failure later. During both sessions, SPO2 is monitored by a medical-grade pulse oximeter.

During the symptoms phase, I found that the reduced breathing apparatus creates sharply more unpleasant hypoxic symptoms than I recall from my chamber ride. But Im 10 years older, lighter and in better physical shape or my symptoms could have otherwise changed. And thats exactly the point of the training, according to Rosser and Dixon.

My first symptom-lightheadedness-appeared at an SPO2 of 92 percent. By the mid-1980s, I was feeling dizzy and disoriented. After 3 1/2 minutes at 22,500 feet, my SPO2 had sagged into the high 60s and my note page says fell like crar, which was supposed to be feel like crap. This response is far more distressing than I recall from my chamber ride. After three minutes, I desperately wanted out of the mask.

During the flight session, I initially jumped the gun with false symptoms.But Rosser cautioned me to take the time to recall the symptoms Id learned in the first session. Five minutes into the flight, with my SPO2 at 92 percent, I noticed the first definite symptoms: slight dizziness and shortness of breath. With Dixon in the right seat, we donned emergency oxygen and descended from 35,000 feet to breathable air at 10,000 feet. (That alone took four minutes.)

The takeaway? When definite symptoms appear, don the mask and descend.Everything else can wait. The second takeaway illuminates my skepticism toward pulse oximeters in the cockpit. Without correlating your symptoms with your SPO2, these instruments dont deliver much value. Everyones symptoms and SPO2 are different. Its more practical to know your symptoms than to simply monitor SPO2.

Conclusion
In retrospect, the Stewart and Helios crashes should have been utterly avoidable. FSI has proven that training to recognize hypoxia and respond immediately is hardly brain surgery. I think anyone flying a pressurized airplane-especially a jet or turboprop-should consider FSIs course. Although its expensive, its not out of line for operators who do periodic sim training.