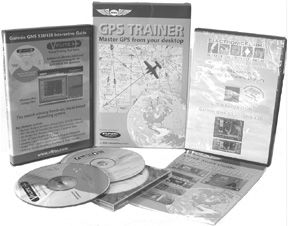 Its hard to believe the ceaseless predictions of GAs impending demise when you learn that there are now more than 40,000 Garmin GNC530 and 430 units in the field. A significant percentage of those are dual installations, of course, but thats still a big crowd of individual pilots buzzing around trying to make a nice toy jump through its considerable hoops.

While the primary functions of these boxes arent difficult to learn, mastery and recall of the higher tasks can be distressingly fleeting, particularly for those who dont fly every day. The operational logic of these navigators isnt what we would call intuitive. Sometimes you need the little knob, sometimes the big one, sometimes it wants the Menu key, sometimes Enter, with no consistency apparent to the novice.

Whats needed for many of us-and whats available-are programs or manuals for ongoing, high-level avionics training. Heres a review of whats out there.

Ab Initio
When the GNS430 first appeared, there wasnt much self-guided help for fledgling Garmin owners. Garmin improved this substantially last year with a free downloadable syllabus containing informational and operational exercises for both the sim and inflight training. Its available at www.garmin.com/aviation. Not nearly as slick or comprehensive as the Pegasus or ElectronicFlight 430/530 trainers, we wouldnt thumb our noses at this one. Free is good, so start there first.

Theres also at least one paper-only training manual for the 430/530 from ZD Publishing, but its copyright date is the tipoff. Originally published in 2000, The Garmin GNS 530: A Pilot-Friendly Manual was all but alone in providing an inexpensive ($39.95) way to make sense out of Garmins nearly 200-page tome.

Never intended (or priced) as a slick Broadway production, the 52-page black and white spiral-bound 8×11 manual looks positively primitive propped up beside more up-to-date training aids. In our view, it has been largely superseded as an inflight crib sheet by Garmins own attractive and logically arranged 16-page Quick Reference guide.

ASAs GPS Trainer v2.0
If youre a renter who flies different GPS types, ASAs GPS Trainer v2.0 may be just the ticket, with an overview of the KLN 89B/94, GPSMAP 295 and the Apollo GX 50/60 series, as well as Garmins 430/530. The program is both Windows- and Mac-compatible, but as your mom used to tell you, a jack of all trades is generally a master of none and this holds true for GPS trainers.

The graphics arent nearly as slick as either of the other two commercial products and theres no voiceover. In fact, the ASA trainer for the 530 is basically just a fancy paper manual with a bit of graphic animation. For interactive exercises, you have to go to the embedded Garmin trainer, which you could download on your own for free.

Still, ASAs GPS Trainer v2.0 is a good way to gain basic familiarity with or review operation for several of the more common navigators and its the only product weve found that does this. In our view, the $99 price tag is about right for what you get. If you fly the Garmin 430 or 530 exclusively, however, either of the other two commercial trainers would be a better bet, in our view.

ElectronicFlight Solutions
Both the Pegasus and ElectronicFlight Solutions products have pleasant voiceover presentation of the training material, which we prefer for this sort of thing, since it lets us concentrate on the display while absorbing the info instead of constantly flitting back and forth. EFS GPS Module has a Student Mode (the default) with voiceover and an Instructor Mode which cuts the voice. Where operation of the 530 and 430 differ, the student is prompted to select which is wanted.

Like VFLITE, ElectronicFlight Solutions has a three-step learning program, but takes a different direction than VFLITEs watch-follow-do. EFS starts with imparting overall concepts, essentially why the unit works the way it does, then teaches small common operations which form the building blocks of later tasks. Finally, the program takes you through guided practice.Various exercises are set up as complete flights, a nice touch. Hit Return and the EFS program will whisk you back to the point you stopped, which VFLITE doesnt do.

The EFS GPS Module has more interactive true/false and drag and drop test questions, instead of just working the sim as does VFLITE. If youre a nuts and bolts how-does-this-thing-really-work sort, youll likely prefer the EFS product, at least initially, since it includes a fair amount of GPS theory and regulatory information not included in the other program.EFS GPS Module even takes you through how the knee bone is connected to the ankle bone inside the panel. All relevant regulatory documents are available as PDFs in the Library.

If youve got some familiarity with operating the Garmins (or start feeling frisky and want to jump on through the exercise), EFS likely will get on your nerves, since you cant access the exercise controls until it has finished the loquacious voiceover. This gets annoying when your mistakes are non-substantive actions, such as which way you scrolled or not quite hitting the arrow representing a particular key movement. Theres no option to try the exercise again without repeating Digital Dans complete spiel.

Occasionally, the interactive test portion will ask you a question that wasnt actually covered. If you answer (or guess) incorrectly twice, the program will try to take you back through the entire segment instead of providing the answer. However, its possible with test questions to Next back to the question, enter the correct answer and move on.

We found a couple of tidbits to be very useful. For example, one of our own bugaboos early on with the GNS530 was grasping which functions wants the big knob and which ones operate via the little one. According to EFS, the big knob is for big lists and the little one for little lists, which worked well conceptually for us.

All that Flash stuff on the Website gave us a headache, but we tend towards meat and potatoes in most things. A demo is available online, but we couldnt get it to work, probably because we had just installed XPs Service Pack 2 and hadnt ironed out the bugs. If you do have a problem with the online demo, theyll send you a demo CD.

List price for ElectronicFlight Solutions GPS Module is $195. Its Mac-compatible with Virtual PC. Online tech support is buried in the FBO module of the Website.

VFLITE Interactive Guide
In August of 2003, Pegasus Interactives VFLITE Garmin GNS 530/430 Interactive Guide was a Gear-of-the-Year pick and its still a peach of a program. Vector graphics provide a crisp, full-screen interface. More than 40 topics are covered, but comprehensiveness is only half the training battle. Getting lots of separate procedures to make sense and stay in your personal RAM is harder.

The Pegasus folks also tackle this with a three-step training process. Maybe youre a bit swifter about such things, but in the early stages, we can follow along with a feature-rich tutorial like this and everything is just ducky, right up to the point that we have to replicate the tasks three segments later without prompting.

In VFLITE, they show you (Demo Mode), then you perform the same functions with prompting (Training Mode), then you can select Solo Mode to see if youve got it down. Make a mistake in Solo Mode and the program will prompt you to try again. If that still doesnt get you back on track, just hit the Help toggle and then turn it back off when youre squared away.

One thing weve found useful after an extended layoff is to take an hour and go through selected topics in Solo Mode. That gives a quick read on what needs a brush-up. ElectronicFlights program isnt set up to facilitate quick review or practice, so VFLITE may give you better mileage over the long haul.

Pegasus emphasizes that you must view the Getting Started page first. The program disk includes Garmins in-house simulator (except for Mac Plus) and manuals and Garmin itself recommends the VFLITE trainer, which will track the topics youve completed, again, except in Mac Plus. The program will not automatically return you to where you left off, however, unlike the ElectronicFlight Solutions program, which we found to be a minor annoyance.

Theres an online tech support from the Website and an e-mail support link. Within the first 30 days, tech support is also available by phone (not toll-free) at 610-738-6901. After 30 days, it may cost you $25 a pop, so well stick with the online version.

That sort of arrangement isnt uncommon these days, by the way, and doesnt cause us any gastric distress, so long as theyre responsive to online inquiries. We couldnt find any griping about this in the news groups, but if you have had problems, let us know.

According to Pegasus, youll need Windows 98 or later, but it really likes XP better, which is no surprise. Frankly, if you can afford a 430/530, we dont know why youd still be running Win98 in 2004 anyway. Nevertheless, theres a work around available in the online FAQs, if needed. VFLITE is also happy with Macintosh System 8.1 or later.

The Basic version that earlier users might have seen has been dropped. List price for the VFLITE Garmin 530/430 Interactive Guide is $229.95.However, online orders are discounted to $179.95, which price VFLITE advises will be good for the foreseeable future. NAFI members get a separate $30 discount. Theres a good demo available online, but its probably practical only for broadband users. It lets you go through all three training phases on your own, but only for selected functions. Check it out for yourself at www.vflite.com/demos/530430demos.asp.

Recommendation
One helpful hint on any of these programs: Unless youre a superwhiz, dont try to master more than a handful of topics at any sitting. If you want a basic understanding of several different GPS units, ASAs GPS Trainer is a reasonable deal at $99. If you fly almost exclusively with the 430 or 530, however, start with the Garmin sim and the new in-house syllabus, which are free.

Of the two dedicated 430/530 commercial trainers, VFLITEs current discount takes it $20 below EFSs $195 asking price, so price differential isnt a major factor. We found ourselves wishing we could combine some aspects of the two.

In our view, ElectronicFlight Solutions is the better resource for a raw newbie who wants a review of regulations and theory along with avionics training. Just be prepared to wash your mouth out with soap on occasion if youre the lets-get-on-with-it type. If youve got a bit of experience with the Garmin or have already done the Garmin sim and you want a quick and easy directed practice and refresher tool, we think VFLITE will be a better fit.