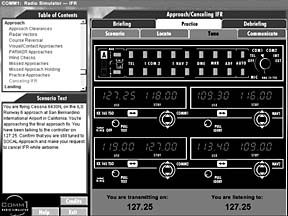 For those of us who trained at non-towered fields, getting instrument procedures down was a snap compared to communications issues.

Whadhesay? was second only in frequency to You want me to what? A variety of audio products over the years have attempted to address this problem with largely underwhelming results. Enter Comm1 Radio Simulator a CD-ROM-based product available in both VFR and IFR versions. For this review, we checked out the latter. With more than nine hours of training scenarios, the pilot working on the rating or looking for a comprehensive brush up should find just about everything he needs to develop a good ATC ear.

Comm1 starts out with comprehensive instruction on where to locate the appropriate frequency. Instrument lessons proceed in the order typical for IFR flight, including many situations which would be encountered rarely if at all during the average IFR training syllabus such as VFR-on-top, cruise clearances and position reports. In the same vein, descent and arrival lessons address PAR/ASR approaches and LAHSO. A section is entitled, When Things go Wrong and includes unacceptable clearances, lost comm, no-gyro approach and transponder problems.

Each lesson starts with an overview and instruction; voice and text. The exercise starts with location of the appropriate frequency among your choice of resources. Hit Practice and you will be given a series of several potential text responses to each ATC instruction or inquiry. Click on the microphone and read whichever response you think is appropriate. Pick the wrong one and youre chastised gently, corrected and you can try again.

Assuming the record function is working, when the series is completed, youre given an opportunity to review how you sounded in each exchange or play back the responses of the programs pro.

We just hope the users CFII eventually teaches the instrument student to read back just the numbers on a clearance, for instance, rather than all that other superfluous blather, not to mention dispensing with all that with you business the program sprinkles liberally throughout. Frankly, this phraseology doesnt appear officially anywhere and when GA pilots hear airline Captains use it, were into a monkey-see situation.

Experienced instrument pilots or those who want a brush up will learn quickly to scroll down the text display to see if theres anything they need to review rather than listening to the entire voice over and then move on. When the standard stuff gets tedious, skip ahead to the emergencies section. Cue up the practice PAR approach and youll find yourself closing your eyes and flying the virtual airplane by the voice commands. This section is quite thorough and well done and we found ourselves almost ready to forgive the programmers for all those with yous. Almost.

One of the more persistent problems encountered by new instrument students is the ability to hear and copy a clearance accurately. Comm1 includes a half dozen or so full-route clearance scenarios in addition to the occasional amended clearance.

We think the program would benefit from a separate chapter that lets the user go through an abundance of different clearances and readbacks in order to lock down this critical function and his own shorthand system. One nit we found a constant annoyance was the inability of the radio tuners to engage a continuous run of frequencies.

Each retuning required a separate click for each frequency increment on two separate knobs. Occasionally, the program had a hearback problem, rejecting the correct frequency. Flipping it to standby and then back resolved the issue. The IFR version of Comm1 lists for $119.95, but we found it offered for $20 less on a couple of Web sites (www.hartaviation.comand www.marvgolden.com). The VFR version is $99.95. Comm1 is available in both PC and Macintosh iterations. PC users can also pick up a multimedia headset with boom mic for an additional $20.

Whether that will appeal to owner already accustomed to headsets would likely depend on how clear their computers speakers are. Then again, anemic or fuzzy ATC-speak might be pretty authentic at times. The headset microphone is supposed to enable you to record your own responses for replay and critique, but probably because of our particular computer set-up we never were able to get that function working.

A C-note and change for an IFR comm practice program is a bit stiff in our view, but the program is well-executed and comprehensive. With faithful use, we have little doubt that in-flight instrument practice will be decorated with a lot fewer Whadhesays?

Flight Explorer
I was killing time at the BWI passenger terminal a few years ago when I found a lounge area replete with the nose section of a jet transport, a cabin cross section and various other airplane parts.

On one wall was a CRT that displayed air traffic throughout the U.S. with data about speed, destination and altitude. Id never seen anything like it. Later, I learned that there were a number of airlines and other airspace users who had a lock on a data feed from ATC so that they could monitor their flights. It was very costly but the capability was there.

Just a few months ago, this capability to spy on the airlines, corporate operators and the guy in the next tiedown got priced down to reasonable levels for casual individual use.

Offering through the Avweb internet site (http:\\www.avweb.com), Dimensions International is selling for the base monthly rate of $9.95 an edition of its Flight Explorer software similar to what the airlines use but for much less money.

Flight Explorer is a Windows program you download from Avweb (sorry, no Macs) and once online, FE downloads information provided by the FAA on all but a few IFRs and some VFRs that have ATC-entered flight plans. This process takes about a minute, sometimes less, with a 56K modem. Once the data is there, Flight Explorer displays a screen that shows a dot for every tracked aircraft in the U.S., Canada some oceanic traffic. The dots move as the system data is updated several times a minute, and as the pointer of a mouse is moved over a dot, text information showing N-number or callsign, type, departure point, destination, altitude, speed and ETA is shown.

More useful than just seeing those dots on the world map is to choose a more limited view that comes preloaded on FE, such as LAX arrivals or all FedEx aircraft presently flying. The software is beautifully designed in that its flexible in how the aircraft are displayed. The map itself can be zoomed in and out either by means of a button icon or clicking and dragging a box with the mouse, for a world view or a view of only a few miles, or anything in between.

With these views, the strategic ATC procedures used to run traffic into major hubs and metropolitan airports are easily seen. All thats missing is the comm traffic and, to some degree, that can be obtained through other internet sites that Webcast ATC for major airports like DFW.

One drawback of the current Personal Edition software (ver. 2.21) is that the application automatically shuts itself down when the ISP connection ends so there isnt much time to build or manage views without having the usage charged against the monthly time allotment, although we hear that a fix is in the works that will allow off-line use of FE.

One rub in the pricing is that each connection has a minimum charge of 15 minutes, so quick looks accomplished in a couple of minutes will add up more quickly than the clock time would suggest.

All of this is great, but why do we care? Frankly, we like it just because its fun. There is an educational component in being able to actually see IFR arrival or departure routings for your home drome or city, but this hardly requires a subscription of more than a month or two.

We did find FE useful in checking out traffic flows to the AOPA convention in Atlantic City and it confirmed that although there had been pre-convention warnings about potential overcrowding, very few aircraft were actually inbound to Bader, thus it was a good bet to avoid the much longer bus or cab ride from the big airport.

While its fun to watch a friend wend his way on a trip, the need to track flights is infrequent at best for most of us. And if we want to track airline flights, its easy enough to get an idea of where a particular flight is for free from one of the flight tracking services on the web (these services are nothing like FE but they can give location and ETA information, one flight at a time).

If youre someone who marvels in being able to spy on your friends and ATC, thats plenty of reason to sign up and enjoy FE for longer.