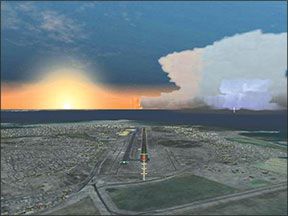 If you are flying a high-performance single, piston twin or turboprop, particularly if you use it for business trips, there is an increasing probability that you will get a notice from your insurer or employer requiring that you take annual recurrent training.

We did a survey of organizations that specialize in recurrent training and found that there are programs that satisfy insurance carrier demands that range from one to three days in length, are either simulator or airplane based, and range in price from as low as $500 for a piston single, to north of $2400 for turboprops.

Once you get past the “They can’t do that to me!” reaction, you are faced with the questions of how to go about complying, how much it’s going to cost and how much time it will take.

Step one is to find out precisely what sort of training will be satisfactory to your insurer. At the most basic level, annually going through a flight review (FR) and Instrument Proficiency Check (IPC) with an instructor you trust to give you a good workout may satisfy your insurer or even give you a slight break on the premium.

That may not be enough once you get more advanced than a piston single or if you are getting up in years. You may even be told that you have to go to a specific training provider. Before taking that as the last word, especially if it is coming from the accounting department at your employer, speak with your or your employer’s insurance broker. Insurers have lists of training organizations they approve for recurrent training and may be willing to look at the program you like and approve it.

Simulator Vs Airplane
Some training providers specialize in pure simulator recurrent training, some use a simulator and your airplane and some are airplane-only trainers. Naturally, each advertises its method as the best.

The simulator versus airplane debate was settled long ago, simulators won. Put simply, you don’t have to waste time positioning for multiple approaches and you can more realistically practice emergencies than you can in the airplane. After all, simulator development was pushed hard after a number of fatal airline training accidents in which simulated emergencies became real.

Some training organizations use generic simulators that do not precisely match the airplane type the client owns. We do not think that is a handicap because flying is flying; the thinking and planning for an approach or how to handle an emergency is general enough that a differences briefing and discussion can flesh out the specific details for the type of airplane. Further, many operations do simulator training and then spend time in the owner’s airplane, putting polish on performance and system specifics, a good combination, in our opinion.

Motion?
There’s a fair amount of hype given to motion-based simulators—something we feel is just that, hype. There have been some involved studies on the issue, particularly one titled “Training Effectiveness of Whole Body Flight Simulator Motion: A Comprehensive Meta-Analysis,” published in the International Journal of Aviation Psychology in 2012 that included a compendium of data from previous research. The study concluded that there was “no evidence that simulator motion improves flight performance in real aircraft.” We agree. We have trained in all sorts and levels of simulators and see no benefit of motion simulators over non-motion ones. However, the simulator should be at least a Flight Training Device that meets FAR Part 61.57(c)(2) requirements for instrument flight training, instrument currency and use for an IPC for a pilot who also meets the requirements.

Result?
We are of the opinion that a pilot who spends the money and time to get serious recurrent training and meets the measurable performance requirements of the training organization (which should be specified going in) should come out of the program with a signed-off IPC (or be IFR current), flight review (FR) and certificate of completion for the insurance company.

Rtc
Based adjacent to the Champaign, IL, airport, Recurrent Training Center (RTC) has been providing simulator training since 1988. It targets pilots flying piston singles, twins and the King Air 90, 100 and 200 series. RTC advertising puts it plainly, “Pilot proficiency at the best price. Period.” It has Level 3 and Level 6 Flight Training Devices, so a pilot can obtain an IPC via the simulators if he or she has been IFR current in the past 12 months. It also has the only Skymaster simulator in the world.

Because RTC has FAR Part 142 approval, upon request, the client can spend one hour in a Level 6 simulator and comply with the requirements for a flight review. There is no extra charge.

Cost for the single-engine course starts at $889 for a “generic IFR recurrent.” For airplane-specific recurrent training, prices range from $1000 for Cessna singles, through $1600 for the Cirrus series. Piston twin recurrent training costs range from the generic multi-engine, two-day IFR recurrent at $1199 to aircraft-specific courses that vary from $1200 for the Twin Comanche through $1800 for the upper-end twin Cessnas—340 through 421. The two-and-a-half day King Air recurrent is $2400. There is only one glass cockpit simulator in RTC’s arsenal, an Avidyne for the Cirrus. We were advised by RTC that there has not been enough demand for glass cockpit recurrent training to warrant acquiring more such simulators.

Simcom
With a training center in Dallas, TX, Scottsdale and Glendale, AZ, and two in Orlando, FL, SIMCOM has become the big dog of recurrent training for the piston single or twin pilot seeking insurance-approved recurrent training.

SIMCOM offers three-day simulator-based courses for most piston twins as well as the Piper Malibu series and the Saratoga and 6X. The syllabus includes six hours in the left seat of the sim, nine hours in class and three hours of briefing/debriefing associated with the sim time. The simulators are advertised as “visual-motion,” however, they are FTDs and will allow a pilot to obtain an IPC if s/he has been current within 12 months of the training session. Airplane training is offered at the Scottsdale facility, otherwise, we were told that completion of the course does not include a flight review sign off.

We were advised that SIMCOM, “as with its competitors,” does not publish its prices and did not share them with us. Our research showed that all of the other recurrent training organizations did disclose their prices.

SIMCOM’s website does not provide much information. If you are interested in scheduling training, we recommend that you not waste time with the website; call them up and find out which facility offers training for the type of airplane you desire, when, how much it will cost and the contents of the syllabus.

Flight Level Aviation
Flight Level Aviation, in Waynesburg, PA, was founded by Dr. Richard Kaplan, a physician and CFI. He brought a full-motion simulator to GA recurrent training some years ago and currently offers training focused on the simulator (which is classified as an FTD) and in the client’s airplane. The simulator can be configured as a generic single or twin with round gauges—Dr. Kaplan explained that the instructors are specialized by type of airplane, so the fact that the simulator doesn’t replicate a specific airplane is not important. We agree—with the wide variety of avionics and mods in various general aviation airplanes, we believe that the sim allows training in procedures, emergencies and upsets, while a knowledgeable instructor brings in the specifics of the type of airplane.

Dr. Kaplan pointed out that Flight Level’s training is tailored for each pilot based on the type of flying, level of experience and type of airplane and that a good instructor can make training realistic.

Flight Level does single and multi-engine, piston recurrent training, but specializes in the Cessna 210 and Beech Bonanza series. An IPC and flight review does require airplane time, according to Dr. Kaplan. Training is flat-rated at $500 per day—most clients complete the training in one to two days.

Century Air
Century Air, based at Essex County Airport in Fairfield, NJ, does piston single and twin and some turboprop recurrent training using both round-dial and glass Frasca simulators. Company president Richard Greene, a retired airline pilot, follows an aggressive, train-to-proficiency, recurrent program. His company focuses on single and twin Cessnas, Pipers, Grumman-Americans and the Cirrus line as well as the TBM-700.
Greene emphasized his concern with what he has seen as a developing “automation dependency” among pilots and his company works to assure that clients can handle anything that comes their way when the automation breaks down.

As a sample, recurrent training in a Baron takes place over two days, includes six hours of ground training and seven hours in the simulator. Cost is $1950. If training in the client’s airplane is desired, the cost is $100 per hour.

Conclusion
When you are in the market for serious recurrent training, there are good choices at reasonable prices. For the money involved, an acceptable program should allow you, assuming you demonstrate the requisite proficiency, to walk out instrument current and with an FR signoff. Training in the airplane only is good, in the airplane and simulator is better. A motion simulator is of no extra value.