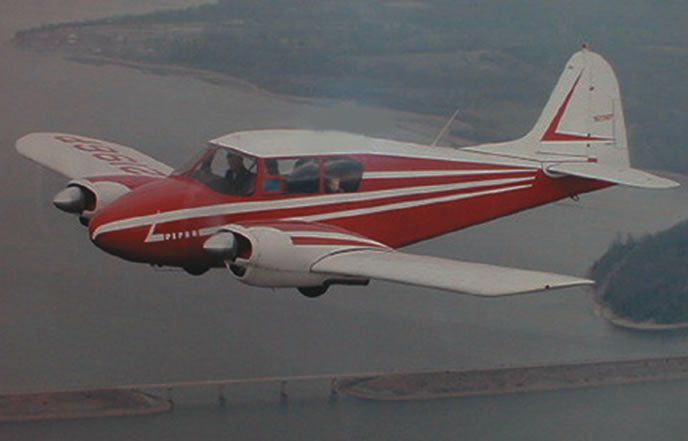 Affectionately known as the worlds largest flying sweet potato or Da Pop, because all Apache N-numbers originally ended in Papa, the Apache and Geronimo conversions of it, are still seen on training school flight lines.

Starting life as a 150-HP-per-side executive transport in 1954, it rapidly proved to be a good trainer. Power was eventually increased to 160 HP, although a weight increase meant single-engine ROC, never particularly good, dropped from 200 FPM to 180 FPM, figures we consider optimistic.

Figure on a no more than a 135-knot cruise unless the airplane has been through the 180-HP Geronimo conversion and then the speed may go as high as 155 knots. The conversion radically improves single-engine performance.

Handling is ponderous, with big pitch changes during flap extension and retraction. Vmc is a no-kidding affair, with abrupt roll off. Because of this and because so many pilots took their multi-engine training in Apaches, it has long been held up as the standard for handling for twin trainers.

An Apache may or may not hold altitude on one engine at a 4000-foot density altitude. It is a good vehicle for teaching pilots that its impossible to get performance out of an airplane that was never built in. Part of the lack of performance is because the airplane is draggy and heavy-with a 3800-pound gross weight. It can carry over 1100 pounds in the cabin with full fuel.

The systems are antiquated and expensive to keep operating. If maintenance is too long deferred, the cost of repairs may exceed the value of the airplane. Most have one generator and one pump running the complex hydraulic system. Lose the associated engine and its either reduce current load and hope the battery holds out or plan on using the hand pump to extend the gear and flaps.

Visibility is merely adequate; the engines and wings block much of the world. The cabin is large and comfortable-something appreciated by generations of pilots who pulled the power way back to burn 12 GPH (it can burn mogas), pointed the nose at the far horizon and motored slowly across the country to build multi-engine time.

With Apache prices as low as $30,000 for a decent one, its not unusual for a pilot who is willing and able to do supervised maintenance to buy one, use it to get a multi-engine rating, build twin time and then sell it for the same price.