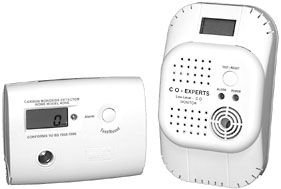 Aircraft heaters seem to either fry your feet with enough BTUs to melt your Nikes or they dispense desultory little puffs barely warm enough to keep your breath from completely frosting the inside of the windshield.

Then theres the aroma, that unique vague smell of exhaust and warm oil that always carries with it the potential for pumping enough carbon monoxide into the cabin to gas a small herd of cattle. If youre real lucky, the CO will remain at the whiff level, just enough to allow the passengers to drift off on a long flight but not enough to turn everyones skin that festive shade of cherry red.

Okay, so well admit to a certain cynicism about cabin heating and ventilation. And, admittedly, in the overall scheme of things, carbon monoxide incidents in GA airplanes are relatively rare.

Thanks to relatively cheap detectors, detection of CO incursion into the cockpit is something every aircraft owner can afford. Were less convinced that detectors are must-have equipment but theyre so cheap that its silly to argue against having one. The question is, which one?

Moving Target
As we reported in the October 2000 issue, when we last examined this topic, there are plenty of detectors to choose from, ranging from the cheap color patches at the low end-$4.95-to a full-blown industrial gas alarm costing some $300. The vast middle ground is occupied by what can best be described as sophisticated household-type detectors. There are at least two purpose-built aviation CO detectors, one very expensive and one moderately priced.

In this report, well mention those but well be concentrating on two new entries-at least to the aviation market-the Senco low-level detector and a model from CO Experts. Both are high-end non-industrial units.

When last we compared CO detectors, we picked the AIM 935 as the best value, combining good low-level detection in a small, affordable package. However, no sooner had we picked it as our top choice than it was withdrawn from the market. Also, although the AIM performed well, it seemed to be failure prone, with numerous buyers reporting failures with only a few months of use. (Indeed, our AIM 696 died during testing and was replaced.)

Aeromedix.com, a Jackson Hole, Montana-based purveyor of aviation safety gadgets, had taken the lead in marketing the AIM units and has also stepped in to find a replacement. Aeromedix provided us with a sample of both the Senco and CO Experts models.

Senco
Senco is a Vancouver-based company thats been in the detector business for about seven years and has recently launched major marketing efforts in the U.S. The company makes what it calls the Senco Model One, a compact detector intended for household and travel use but not specifically designed for aircraft use.

Nonetheless, it is a low-level detector and is thus suitable for use in airplanes. The Senco meets the requirements of the British BS7860:1996 (see sidebar above) for alarm limits but it will display CO concentrations down to 10 PPM and up to 999 PPM. In our view, this gives it a leg up on the AIM units, which also displayed the lower values but seemed to alarm too frequently for our taste.

The Senco is compact, measuring 4 1/2 by 3 1/2 by 1 1/2 inches thick with a weight of 10 ounces. It has a gray, easily legible LCD for displaying concentration and a high-pitched alarm thats audible through even noise canceling headsets.

The Senco uses an electrochemical sensor rather than the slower and less reliable biomimetic technology found in cheaper detectors and in the spot-type detectors that turn a dark color upon being exposed to CO.

Several things about the Senco we like include the fact that it uses an off-the-shelf 9-volt battery. When the battery is removed, a spring-flap raises a small red flag at the top of the unit labeled warning: no battery. Clever and effective, in our view.

Second, the unit has a dedicated test function, which were told is important for electrochemical sensors.

By holding the test button down for six seconds, the detector goes into test mode and can be tested with a casual CO source, such as a match or cigarette. An increasing level value on the display indicates that the sensor is functioning correctly.

The Senco Model One sells for $74.95, has a six-year warranty and a recommended six-year replacement cycle. (Electrochemical sensors are life limited.)

CO Experts
For another $50-$124.95 from aeromedix.com-you can buy the more capable CO Experts, a more sophisticated device that has rudimentary data recording capability. CO Experts is a new-to-the-market model, having been introduced just last fall. The company is clear about one thing: this is not intended to be a UL-compliant monitor. And for aviation, we see that as a good thing.

In fact, theres nothing especially good about UL standards in this context. The gas detector cognoscenti complain that UL specs are dumbed down to suit the cheap, mass market detectors sold in hardware stores. If you had your druthers, youd want to detect lower levels.

As a low-level monitor, the CO Experts measures and displays down to 1 PPM, with a visual alert-the display readout-at those levels. At 10 PPM it gives both a visual and audible alert, with two beeps per minute. At 25 PPM, it beeps twice every 10 seconds.

It goes into full blare at 50 PPM and has various audible combinations at intervals up to 70 PPM. The test button doubles as a hush control, allowing you to silence the alarm for up to 12 hours at low concentrations but only for four minutes at 70 PPM.

The audible alert is piercing and insistent; it drove our dogs nuts.Using the test/hush button, you can recall the peak CO exposure, the time since the peak occurred and its duration. Nice feature for a fire marshal chasing errant oil furnace fumes, less useful perhaps for a pilot trying to silence the thing during taxiing. But the data recording is there if you want it.

The instruction sheet warns that if you punch the test button during one of these tests, the unit will error out. That requires a short wait and another press of the test button.

At 6 by 3 1/2 by 1 3/4 inches, the CO Expert is slightly larger and slightly heavier than the Senco. Like the Senco, its powered by a conventional 9-volt battery which lasts about a year and has a low-voltage peep alarm.

We have to say, however, that we werent impressed with one aspect of the Experts design. The battery compartment is tight and has a spring-loaded lever intended to keep the brain-dead consumer from hanging the unit on the wall without the battery in place. (Well, duh…)

CO Experts offers a one-year warranty on its detector and the sensor kills the unit at the 6 1/2-year mark, at which point the manufacturer says it should be replaced for accuracys sake.

Recommendations
With the withdrawal of the AIM products and the addition of the Senco and CO Experts models, there are still at least a half-dozen CO detectors to pick from, not counting the button or spot-type biomimetic products.

To pick one, decide whose argument you believe with regard to what CO levels represent a genuine hazard. If youre a 50 PPM and up proponent, go cheap. As we reported in the October 2000 issue, the spot detectors-the Quantum Eye and Dead Spot are two product names-are cheap, somewhat effective, but not nearly as accurate as low-level detectors costing 20 times as much. If replaced several times a year, theyll detect a massive dose of CO but are too insensitive to measure small concentrations.

If the slightest whiff of CO enters the cockpit and you want to know about, youll want a low-level detector. In our estimation, we want to know about CO levels as low as 10 or 20 PPM. In that case, the CO Experts looks like a winner. But we said that about the AIM, too, and between complaints about failures and the product being withdrawn, our winner turned out to be a loser.

Value wise, the Senco is hard to beat. Its not oversensitive to CO, its moderately priced and is small and light. The fact that it runs on standard 9-volt batteries is a plus.

If you want a CO detector thatll run on ships power, the only portable option is the COGuardian, which we have had in long-term test for about a year with good results. At $149, its hardly a steal but has thus far proven effective. Its not, however, a low-level detector, with a threshold detection limit of 50 PPM.

Other choices, which we reviewed in the October 2000 article in detail, are listed in the chart. For the moment, we think the Senco is the value leader.