The main images show the busy view outside of Garmin’s King Air somewhere around Memphis cruising northwestbound, and how it looks on the GWX 70 Doppler weather radar. Plan your path through—we’ll come back to it later. 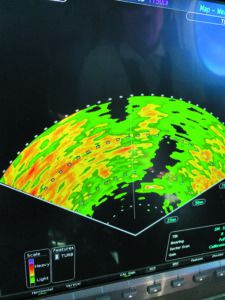 ADS-B may pause an active radar upgrade decision for anything but twins and turbines, but radar is far from dead. Shopping for a used high-end single or twin? You’ll find lots of radar-equipped models. The short list includes Barons, Cessna 210s, Malibus and Senecas, and for up-close tactical penetration of storm cells, a good-performing onboard radar is a worthy tool in the belt.

It depends. Nearly every avionics shop we talked with said they outsource radar repairs, and that field repair options have dwindled in recent years. It seems there’s a shortage of experienced radar techs (many have retired or died), plus parts for many older systems are obsolete. Why train new bench techs to fix old radar systems that you can’t get parts for? 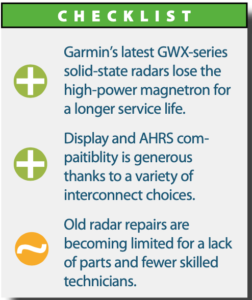 Two repair facilities—Duncan Avionics and Mid-Continent Instruments and Avionics—get high marks from shops for good support of the more common later-generation radars from BendixKing, including the RDR2000 series. It’s a popular and good-performing radar, which for the majority of light twins and big singles includes the ART-2000 receiver/transmitter. Mid-Continent Instruments and Avionics shows a list price of $5490 for an overhaul exchange. However, expect to pay a lot more if the core unit has a faulty magnetron or bad circuit boards and/or if it doesn’t have the important Mod 3 or higher update status.

For the most part, a magnetron failure is uncommon on most well-cared-for RDR2000 systems, while a full bench chamber calibration is more likely required. Mid-Continent told us when faced with big repairs, some owners elect to upgrade the unit’s 4-kW RT to the 6-kW ART2060 RT, depending on the size of the radome or pod, which may not accommodate the vertical scanning feature because the 2060 stands taller.

Vertical profiling was a huge selling point for the RDR2000 series, which scans through a 60-degree vertical arc for a better picture of a storm cell’s altitude structure, which is usually an indicator of the storm’s intensity.

To put pricing in perspective, Mid-Continent lists a new outright ART2000 at $22,178, with a typical seven-day lead time. At those numbers, and if a repair doesn’t make sense ($10,000-plus invoices aren’t uncommon), thoughts turn toward upgrading to a new Garmin system. As you’d expect, the tech is newer and the real-world performance is kicked up several layers.

Garmin has taken the lead in GA active weather radar, and you’ll find a GWX series in a wide variety of turbines and pistons as an OEM standard that’s paired with a G1000. But there’s also interfaceability with Garmin’s GTN navigators and retrofit flight displays. More on that in a minute.

Believe it or not, Garmin’s active radar technology actually came from Narco Avionics. What started as the KWX56/58-series radar (made by BendixKing, and solely supported by Narco) morphed into the technology that birthed the 6500-watt Garmin GWX 68 when Garmin bought it in 2000.

While the KWX was a decent radar, Garmin identified the most common failures and reworked the system’s analog circuits, including the magnetron—the most expensive service part for any radar.

Garmin also changed the face of the RT and transformed the dish array into a flat-plate antenna. That piled on more performance and reliability, too. But this first Garmin radar still has a magnetron—something Garmin moved away from in all follow-on radar systems.

Magnetrons are incredibly high-powered transmitters—we’re talking 6500 watts for Garmin’s earlier GWX 68. In an aircraft with a 28-volt electrical system, you need to step up the input voltage to roughly 5000 volts to drive the pulse to the target. You can compare the long-term reliability of a high-powered magnetron to the life an old television tube. There’s lots of heat, and gradual deterioration of the picture because of power loss.

What that means in the real world of magnetron-based ship’s radar is a deterioration in the displayed intensity of the radar’s return image. And even with a healthy magnetron hitting the target, there are compromises with the reflectivity data. As an improvement, along came the GWX 70—a fully solid- state system.

In place of the magnetron, the new radar uses power transistors for the transmitting muscle, and the end result is a puny 40 watts of power in place of 6500. This huge change in operating principle took some educating for aftermarket buyers and OEMs because when it comes to radar performance, more power has to be better, no? Not necessarily, because it’s not all about power on the target—it’s energy.

Even though the GWX 70 uses 40 watts of transmit power, the pulse energy is almost 500 microseconds long. Add digital signal processing and you end up with far better resolution and a longer target range than with a magnetron.

Joel Andrews, Garmin’s radar design engineer, pointed out that if you look carefully at a magnetron-based radar when it’s sweeping you’ll see different intensities with almost every sweep. With a solid-state radar there’s no magnetron drifting, but instead a smooth and consistent return pattern with every single sweep.

The other advantage of a solid-state radar is the ability to make use of Doppler features. Garmin added +/- 60 degrees of scanning when it upgraded the GWX 68 to the 70, even though the footprint is the same. The antenna and receiver are self-contained, and available to fit a 10-inch, 12-inch or 18-inch radome. You’ll be limited, depending on the size of the radome. As an example, a light twin like a Baron can fit a 10- or 12-inch model, while wing pods are usually more limited.

It’s worth a few words on radomes (and their upkeep in the sidebar on the next page) and how they may affect performance. An accepted limitation for small-airplane radars is the diameter of the antenna, which is limited by the space on the aircraft to fit it. It’s all about beam width. Consider that the radar beam is much like the beam of a spotlight; the farther the beam travels, the wider it gets. The smaller the antenna, the wider the radar beam and the more its energy is dispersed over each mile it travels away from the aircraft. A 10-inch antenna (the size you’ll typically find stuffed in a wing-mounted pod) has a 10-degree beam. A 30-inch dish in the nose of your average airliner shoots a 3-degree beam.

Moreover, when scanning longer distances with a smaller antenna, a storm won’t fill the beam’s entire width. Energy is lost as it moves past areas where water droplets reflect it back. A limitation is that a small-dish radar sniffing out 100 miles might paint a puny return that may be a Level-6 disaster waiting to happen. Simply put, a wide-beam radar needs to be closer to the storm to assess it accurately.

But add Doppler options (through a software upgrade) to Garmin’s GWX radars—including ground clutter suppression, certified turbulence detection and predicted wind shear—and you could have less workload than even the most advanced vintage radar. As an example, one of the bugaboos with airborne radar is dealing with the ground clutter, where you have to manually run the tilt to decipher what is ground and surface features, versus actual weather returns.

At press time, Garmin is transitioning to the next-gen $21,995 GWX 75 (a direct replacement for the GWX 70), which has more processing power and more memory. The GWX 75 scans horizontally as much as 120 degrees, and has vertical scanning for analyzing storm tops and cell buildups. Like the GWX 70, the Doppler-enabled option adds turbulance detection. Since the GWX 70 is a popular OEM radar, it will likely only remain in production until there is widespread type certification fot the newer GWX 75. For the aftermarket, the improved GWX 75 is the system of choice.

There’s also the flagship GWX 8000 StormOptix Doppler radar—a business jet and airliner-caliber system with volumetric scanning and 3D buffering. This radar is smart enough to automatically scan, analyze and remove the ground clutter, plus provide automatic analysis for storm cell detection. It’s also optimzed for close-range scanning with  the Watch feature, which identifies the shadowing effects of short-range cell activity by highlighting areas where radar signals are attenuated by heavy precipitation. It has four times more color palettes than most other systems, which Garmin says is better for storm cell interpretation. Since this is available to OEMs only, there’s no pricing in place.

Garmin’s GWX-series radars have decent display interfaceability since they connect via Ethernet to nearly all of Garmin’s current retrofit big-screen displays, including the new TXi-series MFD/PFD units. There is also compatibility with Garmin’s GTN 750 navigator and G500/600.

Older MFDs like the Garmin GMX 200 and MX20 will work, but you’ll lose features like the ground clutter suppression and turbulence detection. There could be some compatibility with third-party displays since Garmin’s radar works over an ARINC databus, but ask your installer if it’s compatible in your interface.

Another interface that’s critical for radar performance is antenna stabilization. In the old days, radars were interfaced with the pitch and roll outputs from compatible attitude gyros, including the BendixKing KI256 to name one popular vacuum gyro interface. While Garmin’s radar line can still accept analog pitch and roll stabilization from some spinning gyros, these days AHRS inputs from the connected displays keep the precise stabilization in check. The idea is to maintain the antenna beam at the selected tilt angle relative to the ground surface as you maneuver.

Nearly all current certified Garmin displays/AHRS will provide stabilization, including the GI 275 retrofit flight displays. Pitch and roll stabilization can be fed to the radar over the databus or Ethernet, when equipped.

Radar repairs and upgrades generate big invoices, so if you’re doing a prepurchase inspection on any radar-equipped aircraft it’s worth the effort to look closely at the logs for signs of radar maintenance. We know of one buyer who bought a twin only to find the radar was missing from the dome, while a working display was left in place. Have a shop test it.

Back to the lead images on page 4. If you think the 12 o’clock and 2 o’clock positions are smooth-sailing escapes, you’re in for an interesting ride. The black areas painted by the radar are actually shadowing. The cells in front of the black areas are so tall they’re blocking the GWX 70 from seeing behind them.

It’s an example that if you’re new to ship’s radar, there might be a sizable learning curve and you might find yourself getting closer to the weather you were trying to avoid because you misinterpreted the imaging. You can play the radar against ADS-B weather, but know the limits.

Consider some training. At $149, we think Garmin’s Aviation Weather Radar 2.0 eLearning course is worth it, and supplements the GWX-series pilot’s guide nicely.