The EAAs annual AirVenture show in Oshkosh has always been an economic barometer of sorts, with innovations lagging in lean years and new gadgets and airplanes galore when the numbers are fat. AirVenture 2002 proved an anomaly for although the economy is perceived as shaky and the markets are in freefall, we cant recall a year when weve seen as much new stuff.

Most of the action continues to be in the avionics field but we saw a couple of intriguing airframe ideas, too. One thing we expected to see at Oshkosh but didnt was the Eclipse 500 roll-out model. Earlier in July, with great fanfare, Eclipse rolled out what will be the first flying version of this much talked about personal jet.

Although Eclipse continues to do things right-so far as we can tell at a distance-its well-oiled PR machine suffered a setback last spring when it was revealed that an order for 1000 airplanes from a company called Nimbus was to be financed not with hard cash but with a stock swap arrangement. Even before the current market plunge, the value of Nimbus stock turned out to be illusory.

Since then, Eclipse has mounted a full-court press to restore its image as a serious player in the personal jet sweepstakes. Against that backdrop of the Eclipses we-can-and-we-are corporate slogan, we expected to see the roll out model. But no, it was in Albuquerque being prepped for the first flight later in the year.

We asked one of Eclipses tent dwellers what the airplane weighed and if they had found room for enough fuel to allow the jet to reach its range goals.

We were told that the company wouldnt release any numbers on the test article because it was loaded with equipment and not close to the real thing. We noted that this years display by Williams International, developer of the Eclipse engines, was rather more modest compared to what weve seen before.

Last year, it was crawling with staff situated in a palatial pavilion that, save for some marble columns, would have competed with anything in Washington. This year, we found a sparse tent manned by a single Williams rep who told us the company still expects a certified engine for the Eclipse later this year. (Eclipse is at www.eclipseaviation.com.)

On the right side, the Entegra has an impressive full-color ADHRS-driven display that combines attitude, heading, airspeed and other references against a blue/brown terrain background. The bottom screen features an EHSI-type display while the second screen is reserved for moving map, weather and datalink functions.

Avidyne says the system will be available for GA aircraft for under $60,000. Theyve already found customers in Cirrus, Lancair and Diamond. Cirrus will make the Entegra system a $24,500 option for March deliveries in the SR22. The SR22 already has one Avidyne display, so the PFD screen is an add-on. (Contact 218-727-2737 or www.cirrusdesign.com and www.avidyne.com or 781-402-7585.)

Chelton is right behind Avidyne with its own PFD system. For the homebuilt crowd, its selling the EFIS-SV, a two-screen highway-in-the-sky display system that, frankly, has to be seen to be believed. Cheltons Nick Cain told us that 90 percent of the Sierra EFIS-SVs display symbology came straight from the F-18 fighter and we can believe it. Price: $35,000 for the non-certified system about $75,000 for a certified system, which Chelton says will be available next year. Chelton, by the way, bought Sierra Flight Systems specifically to develop PFD technology. Certified systems will sell under the Chelton name, experimental systems under the Sierra brand. Contact Chelton at 972-221-1783 or www.chelton.com.

Modern jet fighters have impressive head-up displays and these have been proposed for GA aircraft from time to time. A company called Microvision is now floating another proposed HUD product called Nomad Personal Display System.

It consists of a headband arrangement that places a small transparent HUD screen a few inches in front of one eye. The screen has a military-style attitude display plus tape/bar display values for other critical data, such as altitude and airspeed. The symbology is rendered in crisp, brilliant red.

As configured for demo purposes, the HUD set-up was driven by a Compaq iPAQ for processing power and a pcflightsystems solid-state gyro box that we reported on in the February 2002 issue. Cost is $9995 for what Microvision calls an uncertified system. (Were not sure why it needs to be certified, frankly.) Contact Microvision at 425-415-6893 or www.mvis.com.

In other avionics news of note, Garmin announced that it will develop a terrain warning and TAWS-B system to display on the GNS400/500 series navigators. The certified TAWS-B will play on the 530. Watch for more detail later. (www.garmin.com.)

In yet another application for Compaqs ever-ubiquitous iPAQ, a new company has joined the fray to develop software for a GPS moving map function on this device. NAVAir by AirGator was selling for $99 at OSH and claims to have a better display than Control Visions AnywhereMap product which we covered in the October 2001 issue. Were not sure the world needs another PDA-based product but if youre interested, contact 914-666-5656 or amir@airgator.com. Look for a review in a future issue.

Lyc and TCM
In the world of piston engines, Lycoming is developing a surprising interest in the experimental market with a new engine called the IO-390-X, a four-cylinder 210 horsepower powerplant based on the companys popular angle-valve IO-360. If the market shows interest, Lycoming will certify the engine sometime in 2004.

Both Lycoming and Continental continue to show off versions of their FADEC engine controls. Lycomings is called the EPiC and uses electronics to vary the fuel and spark timing while retaining mechanical reversion.

Continentals design-PowerLink FADEC-has a complex and large full-authority system that has been certified for about a year. Lycoming is working on engine STCs with airframe approvals to follow, as is Continental. Both companys claim theyve enjoyed good response to these products but one major engine shop owner we spoke to says theres been practically zero interest in the TCM product because its expensive and its benefits are, at best, elusive. We suspect there wont be serious action in the FADEC market until the long-awaited extinction of 100LL, something has that been around the corner for at least the last 20 years.

Significantly, Continental has also tabled its diesel engine project, according to a company official, due to the economic downturn and questionable demand. We were told the engine flew briefly in a Cessna 337, landed and was placed on the shelf to gather dust. NASA, by the way, funded part of the diesels development under the General Aviation Propulsion project. Lycoming has also dialed back its diesel project.

Turbines
While the world waits with a yawn for the much-touted FADEC, interest in single-engine turbines continues to perk along. Rocket Engineering, which developed the JetProp DLX conversion for the Malibu/Mirage, reports that it has now refitted nearly 100 airframes with its Pratt & Whitney PT-6 mod, a total that represents an impressive 14 percent of the entire Malibu/Mirage fleet.

At OSH, the companys principal, Darwin Conrad, announced yet another turbine conversion. This time, theyve shoehorned a PT6A-21 into a Bonanza B36TC airframe, which will sell under the nameplate of TurbineAir.

Conrad says the B36TC already has a 108-gallon capacity and the conversion adds a 12-gallon header tank between the front and rear seats. He believes theres room for another 24 gallons in the wings. This capacity is expected to yield a 750 to 950-mile still-air range.

As currently configured, the TurbineAir can carry about 500 pounds with full tanks. One intriguing option with this conversion is a new oxygen cannula integrated into a headset, eliminating much of the tangle of wires and hoses that makes high-altitude non-pressurized flight a nuisance.

The cannula consists of a tiny cylinder with oxygen outlets but no irritating probes to assault the nostrils. Price of the TurbineAir conversion, says Conrad, is under $450,000. Contact 509-535-4401 or e-mail to turbineair@icehouse.net.

Short Takes
A new interactive computer-based training program for learning Garmin 400 or 500 series navigators is called V-flite and its available from Pegasus Interactive. Cost is $139.95 to $179.95, depending on version. At the moment, only Garmin products are addressed but the company may add other navigators later. Contact 610-738-6901 or www.pegasusint.com.

Worried about taking off with your pitot cover on? PitotShield fits snugly on either a mast or tube-type pitot but its designed to blow off on the takeoff roll if you forget to remove it. (Hey, weve never done that…) The company says it will replace the first lost one for free. Cost is $29.95 or $34.95. Contact 866-359-2020 or e-mail info@degroffaviation.com.

Plane Plastics LTD has a new aftermarket sunvisor for aircraft to compete with Rosens high priced visors. Plane Plastics versions sell in the $289 range and appear to be nicely made with a large visor size and a dark, smoked green color. Contact www.planeplastics.com.

If you use earplugs in a noisy cockpit, you may have longed for a better class of plug which will both stay put and do a better job of sound reduction. Audiologist Marilyn Navia can fix you up. Her company is marketing custom-made earplugs that fill the entire outer ear cavity with a claimed noise reduction rating of 29.8. dB. She also makes a version suitable for use with a cellphone ear bud. At $59.95, they arent cheap but what custom products are? Call 305-477-2333. E-mail plugup@aol.com.

Based on the same idea, Quiet Technologies, Inc. has developed a new, super lightweight headset based on both universal and custom ear molds. Cost is $325 for a universal version, and another $60 for a custom molded version. Contact 8666-784-3883 or www.quiettechnologies.com.

Mountain High E&S, the oxygen specialists, have developed an electronic dispensing and regulating system for onboard oxygen systems. It has electrically controlled valves and a digital display for both two and four-place applications. Contact 541-923-4100 or www.mhoxygen.com.

Dual-chamber vacuum pumps are soon to be available from Aero Advantage (817-326-6147). In addition to two chambers, these pumps have two rotors, too, so if one fries, youre still in business. Price will probably be around $1000 for 200-series models.

Further in the vacuum pump field, Tempest has taken over the wear indicator port design from Champion, which abandoned it due to liability worries. Contact 800-822-3200. Interestingly, the company is applying the wear port idea to overhauled Airborne pumps.

Cleverest use of rechargeable drill driver goes to AMCV for its Pull-Air Bear Tug, a superbly crafted hangar tug made of stainless steel that uses an ordinary rechargeable cordless drill for motive power. Cost is $1099 for a steerable model, plus the drill. Contact AMCV at 215-234-9382.

Still not happy with choices in aircraft datalink? (We cant imagine why.) Baron Services thinks no one has developed a good system yet and wants to use XMRadio to deliver weather to the cockpit. Heretofore, Baron has specialized in weather produced for the television market, using Doppler radar. Contact Baron at 321-751-9202. 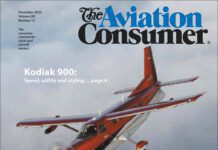 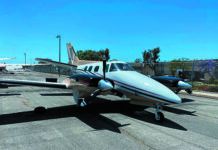