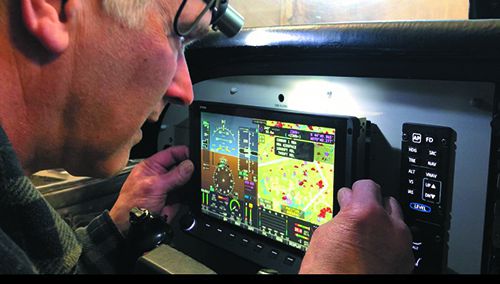 Last year Dynon Avionics took a different approach to avionics installations by approving A&P mechanics to install its SkyView HDX Certified integrated avionics. To review, the capable SkyView Certified equipment is essentially the same basic platform as the company’s experimental SkyView HDX, but has an AML-STC for certified aircraft. Instead of setting up a large dealer network of avionics shops (generally FAA repair stations), Dynon leaves it up to the aircraft owner to nominate a qualified A&P mechanic with IA credentials to do the installation (or install it themselves if qualified). Once Dynon verifies that the mechanic has a valid IA certificate, he or she is listed in the STC as the official installer. The AML-STC has grown to over 600 models, which was initially limited to Cessna Skyhawks. I followed a Dynon project in a Cessna and you can link to the video at tinyurl.com/v66jykb and read about it in the July 2019 Aviation Consumer.

The approach had many in the industry skeptical. After all, many A&P mechanics will admit they don’t have the experience to complete a complex integrated avionics install in the amount of time that a customer might demand. But there are plenty of skilled A&P/IA mechanics who have installed Dynon and other avionics in experimental airplanes and these are the ones who have tackled these projects. And yes, some have taken a long time to finish them because of shop workload and the learning curve. I talked with Dynon’s Michael Schofield who told me that Dynon has been building its installation network (there are 20-something shops—not necessarily avionics shops—set up as HDX Certified centers) with the goal of increasing install volume, which to the end customer means a more affordable upgrade. One way to do that is make install easier.

“We realized we weren’t advancing the second part of the HDX Certified product, which was the affordability and simplicity of the installation,” Schofield admitted. That should be easy to do because after all, Dynon has years of experience catering to homebuilders who don’t have the experience and skill of a professional avionics installer. It already provides prefabricated wiring harnesses that connect the SkyView displays and it’s something that’s being expanded on for more components in the certified version of the SkyView network, including Dynon’s transponder and radios. I like the idea because it could take someone twice as long to pin a connector than it would an avionics tech. Eventually Dynon might have more harnesses that are completely prebuilt and ready to go. Bench time spent wiring the input/output serial data ports, power and ground connections and troubleshooting pin connections adds up. Dynon is also working to reduce the time it takes to mount remote components (the ADAHRS and ARINC modules, as two examples) by providing mounting trays that are pre-drilled to accommodate them, so the installer won’t have to make room for them elsewhere behind the panel. Install kits will come with more small parts, including bolts and fasteners so the installer won’t have to provide them. Schofield used the IKEA furniture example, where many products come with everything you’ll need for a quick assembly. It’s also reworking manuals for more efficiency.

Dynon realizes that it can’t do much for the challenge every installer will face and that’s removing old components (without hacking up the harnesses so the owner can resell the equipment) and prepping the airframe for the new Dynon suite. But streamlining the install to make up for that time spent will help. Worth mentioning is that Dynon acquired Advanced Flight Systems, which fabricates complete panels for homebuilts using its Advanced Control Module, or ACM, which is a power and wiring distribution hub with electronic circuit breakers. This makes for a plug-and-play installation of the Dynon SkyView and third-party components, including GPS navigators. This hub concept will work in certified installs, too.

I think Dynon’s SkyView Certified system has been a success and the improvements it’s making to curtail the install process will give it the competitive price edge in a sales climate now facing serious challenges. —Larry Anglisano