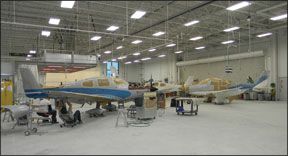 When we visited the Cirrus Aircraft factory in Duluth, Minnesota, last month, we couldn’t help notice the positive vibes that echo throughout the operation. There’s reason for boardroom fist pumps. Production slots for the new G5 SR22 are sold out through October, the SF50 Vision Jet is well on the way toward certification and delivery in 2015, and the competition is struggling to sell half as many aircraft as Cirrus did last year.

Cirrus built a total of 253 aircraft last year alone. Unlike other manufacturers, Cirrus doesn’t distribute aircraft to a dealer network, so production is based on customer orders.

We expect this trend of success to continue for Cirrus, given the innovation and consistent product improvements that are apparent in the latest G5 SR22 models. Moreover, we applaud Cirrus for taking a new stand on training, in hopes of improving the safety record of these advanced aircraft. To Cirrus Aircraft, we tip our editorial hats and award them the distinguished Aviation Consumer Gear of the Year award.

In addition to Cirrus Aircraft, here are more of our top picks from the last editorial year.

Garmin’s original G3X could have been the brisk seller Garmin intended it to be if it were cheaper, had more functions and included an advanced autopilot. Thanks to Team X—a new engineering team who’s dedicated to designing products for experimental and light sport aircraft—the new G3X has all of this and more. With a new starting price of $4395—and $5875 with an advanced autopilot—in addition to a long list of advanced features and accessories, the G3X finally plays with Dynon and other big-name players in the experimental and LSA avionics world. It also has a price that’s sure to catch the eye of thrifty light sport owners and kit builders.

The $180 Bad Elf GPS-2200 Pro is both a GPS receiver and a position datalogger that can stream Bluetooth GPS position to multiple devices at the same time. Its water-resistant case—which measures 3 x 2.4 x 0.7 inches and weighs 3.2 ounces—is designed to hang around the neck, which we find convenient in the cockpit and for taking it on the go. It also offers exceptional GPS performance, with fast and reliable lock-on in every cabin we’ve used it in. For more, see www.bad-elf.com.

The $600 Lightspeed Sierra ANR is proof that you don’t have to spend big to get quality headsets. The Sierra weighs in at 16 ounces and has a high-quality and rugged feel. In our budget ANR shootout, the unit earned cheers for comfort and solid audio performance, much in part for its oblong headband design that limits clamping pressure. There’s a long list of standard features, including stereo music input, Bluetooth cell phone connectivity and long battery life. We were so impressed with the Sierra’s quality and value that we bought a pair for ourselves. For more, see www.lightspeedaviation.com.

We’ve wondered if the traditional navcomm radio might make a comeback if it had more advanced features—perhaps a built-in database for searching frequencies and better yet, an interface that can connect with a panel-mounted GPS for sharing navigation data.

Garmin has done just that—replacing the current line of SL-series navcomms with a completely redesigned line, to include the GNC255 navcomm and comm-only GTR225.While we wish the radios were plug-and-play compatible with the SL-series, installers can use much of the existing wiring when making the transition. The radios have an internal frequency database of airports and VOR stations, liberal amounts of databus interface for cross-brand compatibility and can play with a wide variety of vintage CDIs and EFIS displays.

At $4495 for the GNC255A navcomm and $1995 for the entry-level, comm-only, GTR225, we think these radios fill a void in a market which still has a need for standalone navcomm equipment. Visit www.garmin.com for more..

We put a fresh set of eyes on spin-on oil filters and declared the Tempest Original the winner over Champion’s filter. It was a close call but we like Tempest’s by-pass valve design, its filtering ring magnet and best of all—its lower price. For more details, see www.aeroaccessories.com.

With the widest and most sophisticated featureset, relative ease of learning and customer-centric nature (running on an expired subscription), we picked WingX Pro over a tough field of candidates. It covers the basics, including flight planning and filing, weather retrieval and imagery and inflight navigation, but has two exceptional features: it works with the broadest array of remote devices such as ADS-B traffic and weather, and its moving map functions are the most complete and flexible. The basic structure is menu-driven or just about everything can be done from one of the map pages. On the iPad mini, the largish, bright buttons are a help. Visit www.hiltonsoftware.com for more details.

Hanging a 420-SHP Rolls Royce 250-C20S on a Cessna 206 or 207 and making a number of tweaks and mods, Soloy turns Cessna’s snarling utility van of the sky into a quiet, neighbor-friendly hauler that will carry well over a half a ton in the cabin—with full fuel.

Cessna’s 206 and 207 have long been in use across the planet—especially in remote areas—although with avgas becoming increasingly hard to get in the boonies, their utility has started to dwindle.

Because jet fuel can be found almost anywhere, Soloy’s conversion means that the rugged airframes have been given a new lease on life in the developing world. The most recent Mark II conversion of the 206 using the Rolls Royce 250-B-17/2 engine has a lower thrust line, better visibility over the nose, plus the turbine reliability and power that’s unmatched by a piston. Price for the basic conversion is on the order of $600,000. For more details, visit www.soloy.com.

The first time the FAA comes after you for an altitude bust, the price of an altitude alerting unit suddenly seems insignificant. The panel-mounted $1795 Icarus SAM’s design allows easily setting a desired altitude when climbing or descending as well as decision altitude on approach. The voice callouts are intuitive, can be silenced if you don’t want them or repeated if you missed one. The unit has other features—including a gear warning and alternate round bezel. Visit www.icarusavionics.com.

We think installing a new digital transponder makes better sense than repairing an old one. At $1700, the Sandia STX165 is designed to take up minimal space and has a built-in altitude encoder. The unit also outputs pressure altitude on an RS 232 serial data buss for seamless interface with other avionics that require altitude data input, including GPS navigators, altitude alterters and other integrated systems. See www.sandia.aero for more.

With a stall speed of 31 knots, climb rate of more than 1500 FPM, the same cruise speed and fuel burn of a straight Cessna 182 and no handling vices, the 300-HP King Katmai is at home deep in the bush or at the busiest international airport. A lifting canard means that the airplane has a nearly flat deck angle when maneuvering at low speeds, giving far better forward visibility than other STOL machines.

The greatly beefed-up tricycle gear reduces the risk of runway loss of control accidents that plague tailwheel airplanes, and a gross weight increase allows a cabin load of 718 pounds even with full fuel (77 gallons). For more, visit www.katmai-260se.com.

If all you have is a legacy 121.5 MHz ELT, a 406 MHz Personal Locator Beacon is a must. It can also serve doubl duty for outdoor adventure activities. We think that a PLB should have GPS positioning to let rescuers know precisely where you are, contain a strobe light to help them spot you, should float and be operable with one hand.

With a 24-hour battery life, ACR’s ResQLink+ meets all the requirements, plus it’s relatively small and is priced at less than $300. Other units are either larger, more expensive or don’t have all the features. Just be sure and register the device after you get it so rescuers will know what name to call out when hunting for you. For more information, visit www.acartex.com.

Based on our evaluations, we think the $1425 Dynon D1 pocket EFIS can be a good choice for owners seeking cost-effective backups for their creaky vacuum instruments. The D1 has a MEMS solid-state gyro system just like full-scale EFISs.

Since it’s strictly a portable unit, it has no air data access. Instead, speed and altitude are GPS-derived through a built-in receiver. Clever. For mounting, Dynon provides a cradle that mates to a RAM suction cup mount that works well on a side window. There’s also a device called a “pinch” mount that allows the D1 to snap into an empty instrument hole, while remaining an easily removable and portable footprint. See more at www.dynonavionics.com.