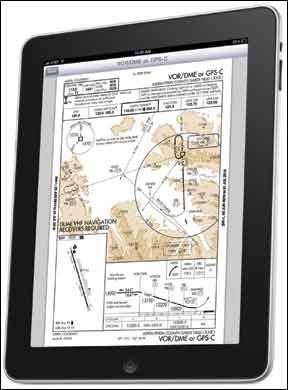 That not-so-faint hissing sound you hear is us reacting at the slightest suggestion that we are Mac fanboys. We are, if anything, washed-in-the-blood cynics when it comes to the great bloated gust of hype that surrounds everything to do with Apple computers and products.

But were also realists and fair to a fault, so when we see practical, meaningful products of any kind, we think the nod is due. So this year, we are naming aviation applications for the iPad as our products of the year.

Please just shoot us if we use the phrase “game changer” applied to anything, most of all a computer. We prefer to think of the iPad and the dozens of useful aviations apps it has spawned as a substantial and useful contribution to cockpit information management. But it extends beyond that, since iPad apps also inform things like test taking, flight planning, weight and balance and so on. If its an aviation task, theres probably an app for it. We think these gadgets are worth considering. (Just dont call us fanboys.)

While were drowning the iPad itself in faint praise, worth mentioning is what we think is the best overall, most useful application: Foreflight.

This app is as strong for what it does as for what it doesnt, which is to overreach with a bunch of useless features most owners would never use. Its a good, easy-to-use general flight planner, chart manager and weather getter. It does these functions superbly, without stumbling all over itself trying to do everything else. In

app writing, restraint is to be admired. See www.foreflight.com.

Reviewing LSAs is sometimes like being the ice cream critic at a BaskinRobbins. There sure are a lot of these things. We flew several this year, but the one that stands out is the Tecnam P2008.

Its one of the most refined LSAs weve seen, albeit expensive. Tecnam offers no apologies, since they are plying the high-price stratum where owners want-and can afford-amenities like premium interiors, autopilots and glass panels, all of which the P2008 has.

Coming from a company that has built certified aircraft in Europe for years, the P2008 shows excellent attention to detail and handles and flies beautifully. Tecnam has spared no effort on the interior and the avionics packages are top drawer. For more, see www.tecnam.net.

If airframers and engine manufacturers can count on one thing, its that customers will say they want one thing, then refuse to buy that very thing when its introduced. And so it has been with electronic engine control systems, which have failed to take off.

Lycomings ambitious IE2 system may change that. It has more sophisticated hardware and software than previous attempts, appears more mature and, we suspect, it will soon have an OEM launch customer or two. If the company can just get its foot in the door with a few Cessna models, we predict this project will have legs, to which we say: Its about time. See www.lycoming.textron.com.

Not that long ago, dancing orange bars were the high-tech latest in engine monitoring technology, but now, these devices are so 1999. Theyve been replaced by large-format monitors that provide lots more information and are less obtuse to interpret.

The three major competitors, JPI, Flight Systems and Electronics International all make excellent large-format monitors, but were picking EIs MVP-50 as the top choice because shops tell us its easy to install, exceptionally well supported by the company and, most important, its highly customizable and configurable. To find out just what you can do with the MVP-50, see www.buy-ei.com.

We think many owners dont like so-called in-ear headsets because they simply havent tried in-ear headsets. But its our job to try such things and when we compared the major players in this market, we were impressed.

The top dog as far as value and performance is the Quiet Tech Halo, with prices starting in the $350 range. Rather than a skull-crushing spring headband to shut out

the cockpit din, these devices rely on a rather more gentle foam earplug through which the audio signal is passed via a hollow plastic tube. Although an acquired taste, users insist these headsets are far less fatiguing without giving up noise attenuation. Check out www.quiettechnologies.com.

Do you really need a carbon monoxide detector? Depends on where your personal demons live. If any of them are hanging out there down by the muffler and heater shroud, might we suggest you do need one?

Cutting right to the chase, this review was easy, since the BW GasAlert Extreme was the walkaway winner of our CO gas chamber competition. The product is small, light and has excellent low-level sensing. For about $240, it will keep the cabin safe from an admittedly rare but still deadly hazard. Find out more at

In case you havent noticed, virtually every new LSA equipped for night VFR has an LED landing light, and its not because theyre cheap. LED lamps are long lasting, bright and efficient, and the industry is making great gains in making them even brighter. Even some certified aircraft are turning to LEDs. Theyre simply the light of the future.

We tested all of the aftermarket LEDs we could find and AeroLEDs SunSpot emerged as the victor in overall value. It will fit into the same space as the ubiquitous GE4509 that most aircraft have as a standard landing light.

It also has a built-in flasher and wig-wag circuit, if youre inclined toward multiple installations. The only drawback is that approvals for some aircraft may be difficult, although AeroLEDs will help with this. Check out the companys full line at www.aeroleds.com.

If you have to ask whether you really need one of these things, youve probably already fried something. But cheer up, with a Sandia Safe fan, you can at least blow the smoke away.

The fact is, avionics stacks still need cooling, especially considering how warm even the best TFT displays can run. For as little as these fans cost, you might as well get the best and Sandia makes five models, so theres no problem finding one to fit your aircraft. Find out more details at www.sandia.aero.

Nice as it is to use a Bose or Lightspeed Zulu, many pilots simply dont need the top-of-the-line. Thats where the Alura comes in. At $299, its a third the price of the premium ANR headsets and although it doesnt perform as well nor is it as comfortable, for that price, we wouldnt expect it to be.

But its quiet and comfortable enough. Its built tough, so broken headbands or mic booms shouldnt surface during normal use. It automatically turns its ANR on and off to save the battery, and the company is small and has already improved the model in responsive to user comments.

Get the details at www.aluraheadsets.com.

The portable VHF radio market used to be much bigger than it is now, but there are still plenty of radios to pick from. And the top pick, according to our comparison trials, is Sportys SP-400, a follow-on to its popular and top-selling SP-200, a first-

class radio in its own right.

The SP-400 has some impressive features you might never use-such as localizer capability and VOR reception-but it also has an excellent two-way radio with good RF and audio performance.

By our standards, these meet the primary requirements for a portable VHF, which is good performance as a backup radio and for use on the ground.

At $299, the SP-400 is competitive with other radios but delivers more for the buck. Check out the SP-400 at www.sportys.com.

Along with everyone else, we noticed a big sea change after the financial meltdown of 2008. Obviously, the OEM market tanked, but owners got a lot more picky about

0)]value when doing upgrades, including the avionics work that still represents the lions share of routine aircraft improvements.

Autopilots are one of these upgrades and expense wise, theyre near the top of the list, right behind engines. The reason is that they involve major surgery to the airframe and the more suited the autopilot is to minimize this, the better. So when the shop says, “Thatll be $40,000 for the autopilot install,” many owners ask, “What other options do I have? We think the S-TEC System 30 is one of these and the best-value option in autopilots.

The installed price is reasonable, the system will fit into about anything and while the System 30 doesnt have every feature, it has enough to earn it our top value recommendation. For more, try www.s-tec.com.

1)]When it comes to prepping for a written, the market is choked with choices, so much so that its hard to know where to start. Triaging the choices, we compared the multi-media options for the private pilot exam and pegged Sportys as the top.

Not that those from King Schools, Gleim, Jeppesen and ASA arent worthy, but the Sportys course delivered the best combination of technology, pacing and price/value, in our view. See www.sportys.com for more.