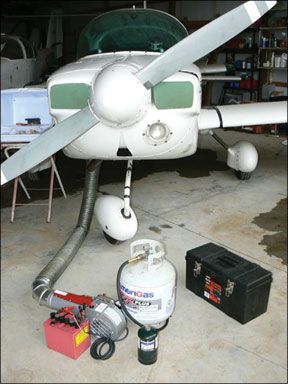 If you live wh

ere the weather rarely falls to 20 degrees, you probably cant justify an expensive installed preheater of the type we reviewed in the March 2007 issue of Aviation Consumer. But if you still need an occasional preheat, where does that leave you? A heated hangar is one option and portable preheaters are another. Assuming the hangar is out, for this article, were examining two portable options: the old standby Red Dragon from Flame Engineering and a new gadget called AeroTherm, an electric preheater. Obviously, portable heaters work differently than

their permanently installed counterparts. Rather than heating by direct contact through heated elements, plugs or pads, the portables simply blow hot air into the engine compartment, raising the temperature until the engine is warm enough to start.

This has some pros and cons. On the plus side, you use the heater only when you need it, so youre not wasting fuel. Theres nothing to install on the airplane, so you dont have to fool with an A&P nor any kind of FAA approvals. Last, a portable-at least a propane model-blows a fiery blast of heat, so its faster than installed elements.

On the downside, portables take up space in the hangar and propane versions need refueling and require storing that fuel in the hangar or elsewhere, which can be hazardous. Portables can be carried in the airplane, but doing so isnt especially practical and theres always the worry about propane in the cabin. (The electric AeroTherm doesnt have that problem.)

Last, portable preheat can be problematical. It does a terrific job warming up cylinders but not much for that 20-degree slug of cold oil in the crankcase, unless

you heat from the bottom up. Further, a 10-minute blast of hot air probably isnt enough to thoroughly heat the engine-youll need at least 15 to 20 minutes to do a good job of it. Both of the products we tried here are credible devices, in our view, but they were designed to achieve different goals. While both will heat an engine warm enough to start, they approach the problem from different directions, design wise.

Red Dragon heaters are built in the middle of Kansas-and have been for years-and were primarily designed for Alaskan and Canadian bush pilots. Some 35 years ago, Mike Pivonca was designing and manufacturing agricultural propane-powered flame products and was approached by a couple of bush pilots. He built his first aviation preheater and it used propane as fuel. Since then, Flame Engineering has sold thousands of units to pilots and FBOs around the world. Flame builds one basic preheater with a number of accessories. Their basic unit consists of a regulator, a burner chamber and a fan that blows air through a section of flexible tubing routed into the engine compartment.

The fan can be powered by either 12 volts or 110 volts. The former is better for true portability, particularly in any outback situation. Theres almost always a car or truck handy and you can sit inside and stay warm while you thaw out your engine. The 110-volt version depends on standard AC being available, which means its better suited for owners heating in hangars or on ramps with power outlets nearby. And usually, the outlet is far enough away that youll need to have available-and lug around-a long extension cord. The Dragon comes in a large

plastic tool box and is nicely self contained. Well built and dependable, their sturdy construction adds up to a not-too-bad 16-pound weight, without the propane.

Regarding the propane, CFR 49.175 makes it illegal to carry propane in an aircraft that isnt specifically a cargo carrying vehicle, although Alaska is excepted from this rule. But the reality is that owners do this all the time. We make no recommendation one way or another on the real-world safety of carrying propane. Pilots in Alaska have to make a living and, presumably, they understand the risks.

Flame recommends buying an adaptor and using the small 14-ounce throwaway propane bottles that cost about $3 and will power the unit for 10 minutes. Two or three bottles would be necessary on an extremely cold day and since youd let each bottle deplete completely, disposal shouldnt be an issue. The idea is to buy the bottles at your destination, so you dont have to carry them.

The Red Dragon delivers serious heat so Flame recommends that you never leave it unattended. The heater blows a scorching 49,000 BTUs into an airplane at the rate of 320 cubic feet per minute. The flame is actually prevented from entering the hose by a metal elbow and the hose is plenty long, but its still a hot flame. More than one cowling or wire bundle has been fried by a misdirected Red Dragon hose.

What we didnt care for with the Red Dragon was the 6-foot loop of separate duct you need to drag along. Further, we would like to see included in the kit a 7/8-inch stamped steel wrench of the sort provided with tablesaws. Otherwise, you have to carry your own to deal with the gas fitting.

What we like most about the Red Dragon is that out of the box, it looks professional and capable. When you start it up, you have instant hot air and almost instantaneously, the top of the cowl was too warm to touch. The Red Dragon unit we tested included a high-limit heat sensor and the list price is $538. Street prices are considerably less. Aircraft Spruce retails theirs for $431.35 and Chief asks $400.50. The disposable bottle adapter and a handy cigar lighter/power port adapter are both around $17.

Flame Engineering will overhaul the unit for the cost of any necessary parts and shipping during its life. Theres no specified warranty but the company generously offers a free summer tune-up, if you pay the shipping and parts costs.

Spearfish, South Dakota, is one of the more ironically named towns, but its also a good venue to find aircraft preheaters during the low-sun months. Spearfish is the home of AeroTherm Heaters. In 2004, Herb Hill, a long time pilot, had an idea for a revolutionary pre-heater for his airplane.

Based on the forced air furnace systems used in most homes, he developed a portable heater that recirculated warm air, gradually heating it more and more until a preset thermostat shuts the unit down. In November of that year, he introduced the product and a new company was born.

When we requested a heater for trial, we were sent a prototype unit that will be ready for next years cold season.

The new heater has a variable temperature knob that is scaled from off to 90 degrees F. The thermostat will allow an engine compartment to be heated to a certain point and no more. Its also possible to leave the unit on indefinitely, allowing it to cycle as needed to maintain this temperature.

The newest version has a dual heater element, a larger, more efficient fan to move more air at greater velocity and the case is more rugged. Weighing in at 10 pounds, the unit is truly portable; just remember that youll need your own 100-foot 16-gauge cord, weighing another 10 pounds. Current models sell for $399 from Sportys and its estimated that the newer units will be just a few dollars more.

The AeroTherm is hung from the propeller/spinner by a sturdy nylon strap. Four-inch ducts are installed in the nose air inlets and sponges included in the kit are used to plug any cowl flaps or openings. Plug it in and set the thermostat and according to the manual, the engine will attain 75 degrees in three hours on a 0-degree day. (We tested the unit in weather warmer than that.)

The fan was so quiet we had to plant an ear against it to see that it was working. The product is light but takes up a bit of space in an airplane. Because its a prototype and obviously shipped in a rush to accommodate our test, well defer on any comments on the finish of the components and construction quality. The company offers a 30-day, money back guarantee.

Unfortunately, our test was compromised by some unseasonably warm weather, but temperatures were still below the limits set by Lycoming and Continental for preheating. The Red Dragon is meant to heat an engine very quickly with an overabundance of heat and it certainly delivers.

With the hose forced into a bottom opening in the cowling-Flame Engineering recommends this and we agree-the top of the cowling was warm to the touch in under a minute. In 30-degree weather, the Red Dragon raised the oil temperature by 20 degrees and the cylinder and case temperatures by 20 to 40 degrees. In 30 minutes, the oil was 38 degrees warmer and the case and cylinders near 50 degrees warmer. The test was done without a blanket.

For the AeroTherm, we did use a Tanis engine blanket. The graph shows the results. Clearly, the AeroTherm is slower than both the Red Dragon and the installed preheaters we reported on in the March issue. But then its intended to be. In two hours, we noted a 10-degree rise in the oil temperature while the cylinders and case were 17 to 29 degrees warmer.

These products are too much of an apples-and-oranges comparison to pick one over the other. They do different things. For fast preheating in primitive environs, the Red Dragon is a winner. Its robust, reliable and fast. But its not practical to carry with you, unless youre flying the bush where theres no other choice.

The AeroTherm unit is more genteel; just the sort of thing a Cirrus or Bonanza pilot might carry. If you can tolerate the relatively slow heat up, its not a bad choice and with an extension cord, its practical to carry it. To be really effective, however, we think youll also need an engine blanket. The AeroTherms heat output simply doesnt match the Red Dragon or it doesnt focus the heat right where its needed, as permanently installed heaters do. In our view, if you need heat more than a few times a year, the price difference between the AeroTherm and Reiffs inexpensive sump and band heaters argues for installing the permanent setup.

Jim Cavanagh is a frequent