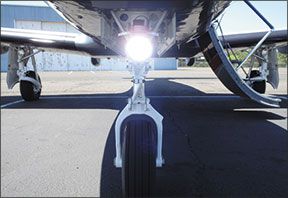 It takes a while for otherwise common technologies to filter down to aircraft applications. And so it went with LED lighting, with welcomed advantages.

Lighting up the airframe with LEDs allows airplanes to be seen as effectively as in the old days of incandescent lamps (the FAA requirements for visibility, brightness and all that have not changed), but without the draw on the electrical system. They’ll also eliminate the over and over again draw on the pocket book that’s too familiar with frequent replacement of traditional landing and taxi lights. That’s because LEDs are so simple they last for thousands of hours, can endure vibration out the kazoo and reduce the electrical requirements of a system. Many owners keep LED landing and taxi lights on all the time.

While this article discusses LEDs in general, we’ll focus on certified products that replace the older incandescent units with minimal rework—so-called drop-in lights. There are too many to cover in this space, so we’ll look at the most popular, based on our discussions with high-volume retailers, including Aircraft Spruce—an excellent source for aircraft lighting, in our view.

Led 101
The first LED was discovered back in 1961 by Baird and Pittman who were engineers at Texas Instruments. Their discovery was based on electroluminescents, but since there was no perceived use, it remained a simple known concept for decades. Engineer Nick Holonyak, Jr., is considered the father of LEDs after he developed the first visible spectrum LED. The first were used in seven-segment clusters and we recognize these as the faces of digital clocks, watches and lab instruments. The display on my first Loran-C receiver had a bunch of LED segments, almost always displaying these words: No Signal.

Green is the hue to which human eyes are most sensitive and can detect at a low candela. Other colors require much more power before being detected. LEDs are rated in millicandella. High-Brightness LEDs can achieve 15,000 MCD, or 15 CD, and optical trickery can create effective candela of over 45,000. The High-Brightness LEDs are used for anti collision lights and landing/taxi lights. Anti-collision lights are usually 20 to 30 times the candela of a standard LED.

There are a number of companies in the aviation LED industry—almost too many to count. For a primer, browse the Aircraft Spruce website (www.aircraftspruce.com). Besides the recognizable Whelen name, you will find AeroLED , Kuntzleman, Aveo, PSA, LED XPAK, Aircraft Sextant, Teledyne’s Alphabeam and EPL. Older companies, like Grimes, which was purchased by Honeywell, have forsaken LED Technology, but still support the legacy lights.

The biggest players are Whelen, AeroLED, Teledyne Lighting and Display and Aveo Engineering. It’s important to note that not all LED lamps are incandescent plug-ins. Some strobe lamps will require the removal of the power supply and rework of the wiring. Do-it-yourselfers might easily tackle a landing or taxi lamp replacement, but installing new LED strobes and position lights might require the help of a shop.

Whelen engineering
Whelen was started by George Whelen, who invented the rotating beacon for aircraft in 1952. This company developed lighting products for airplanes and the different configurations that would allow a plane builder to meet the §1401 requirements. The company went on to develop automotive and railroad lighting systems, which overtook its aviation sales numbers. Even so, Whelen enjoys huge popularity in the aviation market.
Whelen’s George Ginnetti told us that the company purchases 60 million individual LEDs each year for its various products. Whelen has an OEM line and an aftermarket/replacement line of lighting products, including the Parmetheus lamp, which drops into a PAR 36/46 landing or taxi light installation.

Like any drop-in LED lamp, aftermarket products have to be designed for the space taken up by the original lighting, often allowing for much less of an area available for heat sink on the lamp’s chassis. The trick for landing and taxi lights, for example, is to design the unit so it’s no deeper than the incandescent lamp it replaces. Overall, LED technology brings advantages over older lights. In some cases, that means ridding old power supplies and accessories.

Whelen’s ORION600-series anti- collision light eliminates the need for external flasher boxes, can be flush- mounted in a variety of applications and is retrofittable to most Whelen legacy strobe products.

The company’s 71055 LED anti-collision beacon is designed to directly replace existing Quartz Halogen beacons installed as original equipment on single-engine Cessna models (some models have an in-line resistor that has to be bypassed, requiring some wiring changes). The LED beacon is also retrofittable with a variety of mounting options.

Aveo engineering
Aveo is a European company and the president and founder was an early Apple employee. Christian Gather, who runs the Florida office, told us that Aveo will soon be consolidating all manufacturing to Florida.
Aveo products are more expensive than competitors, but they offer a lifetime warranty and, based on our evaluation, a virtually unbreakable product. We think they look good, too.

Aveo brings European styling to general aviation, and its lights are all fully encapsulated, hermetically sealed in a proprietary polycarbonate and then coated with what they call Nano-Cloak, a UV-resistant spray.

The TSO’d AveoMaxx Hercules (with 140,000 candela) is the three-in-one landing, taxi and pulse light that uses what Aveo calls the Rocky-Reflector system. Aveo advertises the Hercules to maintain 70 percent lumen maintenance after 60,000 hours. The Hercules is available with a bracket or without, for dropping into an existing PAR 36 housing.

The Galactica RedBaron XP anti-collision light contains 36 LEDs and is designed as a replacement for existing anti-collision systems, which will likely require a wiring change. We’re impressed with Aveo’s newest generation combination strobe and position light, suitable for mounting on top of the tail.

Aveo said the low-drag unit fits almost all standard rudder light mounts, but is also available with an aluminum adapter. It’s a good choice for applications requiring a rear coverage light due to wingtip light coverage zone limits. It requires no external power supply and operates from 9-32 volts. We like Aveo’s lifetime warranty policy.

Aeroleds, teledyne
AeroLED is best known for its SunSpot series landing and taxi lights. These lamps are certified replacements for the GE4509 and PAR 36 lamps, while using the existing mounts or mounted with custom mounting rings.
AeroLED says the SunSpot 36LX product has a 50,000-hour guarantee and has over-temp protection, in addition to a low-voltage sensor that shuts down half of the LEDs when it senses low input voltage.

The SunSpot 36HX lights have an integral wig-wag that can be used as standalone or pulse with other SunSpot lights. The 36-series is available with an optional Pro-Tech lens coating, which comes with a lifetime warranty against breakage from rocks and debris. While these lights are pricey as it is, we think the extra $40 or so premium is worth the coverage.

Of interest is the specifications of the SunSpot—measuring only 1.25 inches deep, making the lamp versatile for tight cowlings.

If you opt for the HX model, with the wig-wag functionality, plan on extra wiring.

Teledyne Lighting and Display Products offers the Alphabeam for replacing GE4509 and PAR 36 lamps, in addition to the Alphabeam II for the larger PAR 46 replacement. It operates on 28 volts and has a calculated 30,000 MTBF (mean time between failure), thermal protection from overheating and has an anti-icing lense.

Compelling upgrade
We think LED upgrades make sense on several fronts. In a previous Aviation Consumer field trial, every replacement LED landing and taxi lamp we tried had a broader beam and did better at illuminating objects than a 4509 lamp did. That means with an LED leading the way, you might have the advantage of spotting wildlife or other stuff on the runway that you wouldn’t want to hit.

“The LED landing lights on my Cessna twin are extremely white—probably whiter than even HID lights. While the colors at night seem a bit washed out, the white and yellow pavement lines and reflectors stand out really well,” one owner told us. Incidentally, the $1000 STC’d cowl lighting kit for 300 and 400-series Cessna twins offered by Knots2U can be upgraded with LEDs.

As we reported, some PAR 36 replacements offer the optional see-and-avoid benefit of a wig-wag mode, but with the cost of additional wiring. Speaking of costs, you’ll certainly pay more for LED technology. In our view, when considering the long life expectancy of the light, the minimal power draw, the dependability that it will almost never let you down (you know, that gnawing question whenever you reach for the landing light switch), the buy-in price could seem more palatable.

When it comes to anti-collision lights, we really like that LED upgrades can eliminate remote power supplies. These power packs often induce annoying noise and create imperfections in the audio system, they get in the way when installing remote avionics equipment and add weight to the aircraft. Plus, they fail.

We believe LED technology is here to stay, simply because LED lamps are bright, efficient and reliable. Best of all, we think LED landing lights bring sizable benefits to daytime operations because you can keep them on all the time.

As we reported in our October 2013 issue, a few companies, Aveo in particular, have developed high-tech LED interior lighting, and who doesn’t have an LED flashlight in the flight case?

We think any of the lights covered in this article are worthy investments. If we had to pick a favorite brand, it would be Aveo. We think it edges the competition when it comes to styling, build quality and a lifetime warranty.

But you’ll pay.
If it came down to economics, Whelen would be our top choice. It has a diverse product line and is seemingly focused on offering LED replacements for its vintage products.