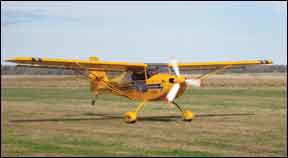 At AirVenture last July, a poster in the Aerotrek booth caught our eye: $69,850 base price. Huh? That can’t really be right, can it? What’s the gimmick? None, really. Although most of Aerotrek’s airplanes sell for about eight grand more than that, they’re still on the low end of the price spectrum.

By our lights, a $70,000 airplane is by no means cheap, but if it costs barely half of its highest price competition, could there be some exceptional value there?

We aimed to find out with a trial flight and a look at the company. Peeking ahead to our conclusion, we think these LSAs represent exceptional value, even if we wouldn’t necessarily call them plush.

Two Models
Like so many light sport airplanes, the Aerotreks come from Eastern Europe, specifically the Aeropro CZ factory in Nitra, Slovakia. While some of these former Eastern Bloc companies seem to come and go, Aeropro has been at it awhile, having been established in 1990.

You may not have heard of the company, but you will have heard of its airplane: The EuroFox. Two models are available, a taildragger and conventional tricycle-gear airplane.

The Aerotrek brand is the sole property of Rob Rollison, a Bloomfield, Indiana-based aircraft dealer who is the sole distributor for Aeropro in the U.S. His models are designated the 220 (taildragger) and the 240 (trike). Although there are minor differences, the Aerotrek airplanes are essentially identical to the EuroFox line, which itself descends from the Avid Flyer, an immensely popular design that first appeared in 1983 and which formed the basis of the Kitfox kit aircraft, another big seller that’s still in the market today. (See Aviation Consumer, December 2010.)

The airplane’s appeal is easy to grasp. It’s a simple build, with conventional rag and tube construction, side-by-side seating, center sticks and either a tail wheel or tricycle configuration. Unique to the design are full-span flaperons whose mechanical guts are outside the wing structure itself, making for a relatively simple build. (The wings themselves are aluminum ribs over a conventional spar.)

Another unique feature is what those flaperons and their related hardware allow: Fully foldable wings for storage or trailering. If this is a market advantage, not many people actually capitalize on it, according to Aerotrek’s Rollison. The vast majority of owners hangar the airplane conventionally, although owner Charlie Martin, whom we visited in Florida, shares a T-hangar with a Cherokee. To shoehorn it in, he folds the left wing—a five-minute-job—and shoves it into a space next to the Cherokee. (See photo and video.)

No Price Push
Aerotrek offers a long list of options for its airplanes, including two engines, either the 80-HP or 100-HP Rotax. Guess which one buyers opt for? You can make a similar educated guess about what kind of avionics they spec for their “low-cost” LSAs. The Aerotrek options list is long, including a basic steam-gauge setup with a single Filser ATR500 radio/intercom and a Mode-S transponder for $4890 on top of the base price. For $15,000 additional, you can have a Dynon Skyview with synthetic vision, the radio and a Garmin GPSmap 696. There’s even an iPad “iPanel” option, which places the iPad in the center of the panel with a custom mount.

These options have resulted in predictable buyer choices—most Aerotreks go out the door in the high $70,000 or low $80,000  range. Would-be LSA owners may say they want inexpensive LSAs or the industry may assume low price is a selling point, but the actual buyers themselves aren’t behaving that way.

“That’s one thing that’s surprising. It’s not a matter of money,” says Rollison. “It’s not that we are selling our airplanes to people because they’re cheaper. That’s not that at all. Most of the people who buy our airplanes could buy a $200,000 airplane if they wanted, but they are getting what they want for their needs or inclinations.”

Quality Work
With the downmarket prices, we weren’t really expecting the Aerotrek airplanes to match the detailed quality of other models costing a third again as much. If this is true, we can’t say it was apparent. We examined two new Aerotreks owned by owners in Jacksonville, Florida and flew with one, retired airline pilot J.D. Kinsley.

We spent some time going over the airplane carefully and we were impressed with what we found. The exposed welds on the tubing were clean and well finished, the tubing itself was painted or coated and the fabric work—Poly Fiber—was as good as we’ve seen anywhere else. There were no paint slobbers or poor fits and the panel was well put together and detailed. We found nothing to complain about.

The interior of the Aerotrek has comfortable seats with adequate if not luxurious padding and even on a blistering hot Jacksonville summer day, the cabin is comfortable, if a little warm. The clear plastic doors, supported by gas springs, can be open during taxi and this provides plenty of ventilation.

The cabin details are Spartan. The carpeted baggage compartment is relatively generous and accessible from the front seats, but restricted by a tube cage work above it. You’ll have to consider your suitcase and flight bag sizes carefully. Capacity is 33 pounds.

The flat metal panel is all business, with a center mounted throttle flanked by the choke and an oil cooler shutter control, which helps with the Rotax’s notoriously slow warm-up time. Rudder pedals and brakes are similarly utilitarian and fully exposed.

The tubular pedals pivot to provide braking. We especially liked the trim and flap controls. They’re just levers, which you can distinguish without looking by the shape of the handle—the trim has a T-handle, the flaps are round ball.

Both controls are continuously positionable—no detents. This takes some getting used to with the flaps, but we ended up liking it. Many LSAs have electric-only trim, the argument being that it’s lighter. But we prefer the continuously variable control in the Aerotrek, because you can grab as much or as little trim as you want instantly and be done with it. We wish all LSAs had manual trim.

Flying It
Because they were marketed into the European ultralight market, the EuroFox/Aerotrek airframes are quite light by LSA standards. Kinsley’s A220 taildragger has an empty weight of 644 pounds against a gross weight of 1235 pounds. With 589 pounds of useful load and two pilots aboard, there’s still capacity for baggage.

Also, at a typical flight weight of 1200 pounds, the Aerotrek has a power loading of 12lb/HP and it that shows in a strong climb rate. We saw nearly 800 feet a minute on initial climb.

Although LSAs tend to be twitchy, especially in pitch, the Aerotrek is less so. Its roll forces are heavier than other LSAs we’ve flown, probably because the full-span flaperons amount to more total control surface area. But that knife cuts both ways. Watch a Kitfox take off and you’ll notice a bit of roll “walk” just at rotation, even by experienced pilots. The flaperons have a lot of authority and they’ll exert it even at slow speeds. That also makes them ideal for ops into short, unimproved runways. (Aerotrek has a tundra tire option for serious outbackers.)

Like the Kitfox, the Aerotrek has a heavy tail—it takes a willful push to lift it, during which time you have to be careful to not input undesired roll. Once the tail is up, pitch is moderately light, although not twitchy.

There are no centering springs on the flaperons, so a roll input stays input until the pilot removes it. Pitchwise, the airplane positively damps a phugoid in three cycles, just as it should. With all that control area, the airplane excels at slow flight, right down to a little over 40 MPH indicated.

It’s also relatively fast, cruising at a solid 120 MPH at what amounts to 70 percent power on about 5 gallons per hour. With 22 gallons usable, it’s a three-hour airplane, with generous reserves. Like any of the fast LSAs, that makes it a practical go-places airplane for two people who don’t need to adhere to a schedule.

Conclusion:  The Aerotreks appear to be competent performers at a highly competitive price. While their construction is not innovative, we were impressed with the quality of the execution.

We didn’t find anything to seriously carp about, but plenty to like. For more information, contact Aerotrek at www.fly-aerotrek.com or 812-384-4972.