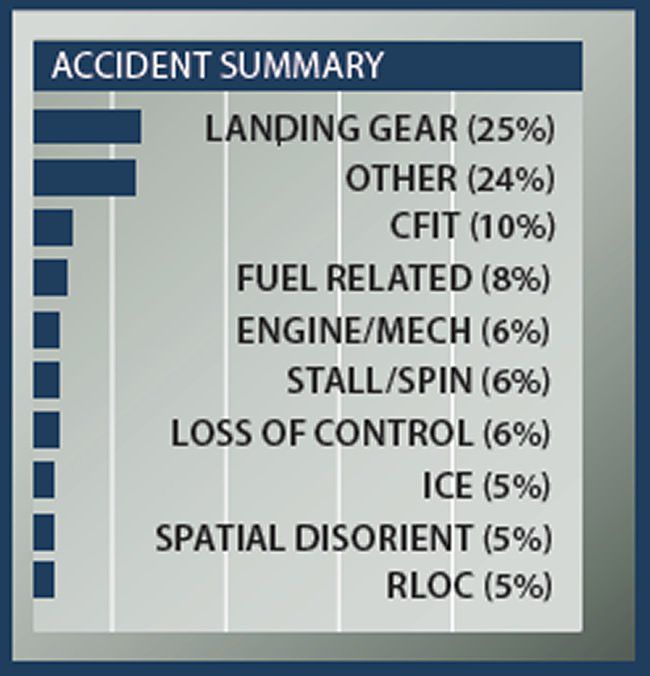 In our review of the 100 most recent Cessna 310 NTSB accident reports, landing gear problems led the list. There were 25 reported gear-related events, 20 of which were collapses. There were probably more because gear-up landings arent always reported-they almost never cause enough damage to meet the NTSB definition of a reportable accident.

If the Cessna 310 has an identifiable shortcoming that causes scraped-up airplanes, its the gear. The electromechanical landing gear system is as reliable as dirt. However, it absolutely requires that maintenance be done correctly and that worn components be replaced.

In our experience, rigging the gear takes two people who know what theyre doing about eight hours-and it has to be done by the book. Further, all parts have to be within tolerances or its an invitation to a gear collapse.

The reports show that if the nose gear strut of a 310 is flat, its a no-go item. The nose gear will jam in the well and isnt going to extend.

Finally, if the airplane has to be landed with one or more of the gear legs up, the NTSB reports showed that its no big deal. As with other aircraft, weve found no gear-up landings in which anyone was even injured unless the pilot shut down the engines trying to save the engines and props. The one pilot who tried that idiocy on a 310 crashed short of the runway.

Other than gear collapses, we saw nothing about the design of the 310 that stuck out when it came to accident causes. We expect to see at least 20 percent of the accidents of a nosewheel airplane to be due to runway loss of control (RLOC). On the 310, there were only five, one of which was on an ice-covered runway. It handles well on the ground.

The fuel system can be complicated-with as many as six tanks-yet there were only eight fuel-related crashes. Of them, just one was due to mismanagement of the fuel system. Six pilots simply used up all of the fuel onboard. One was the victim of a pilot-rated passenger who repositioned a fuel selector and didnt tell the pilot.

Six accidents were due to engine problems. We suspect there were more engine failures, however, because the 310 has decent single-engine behavior, pilots probably just feathered the dead engine and made a safe landing.

There were six loss of control accidents; only two were Vmc rolls after an engine quit.

Several pilots crashed in IMC under conditions that reflected poorly on their judgment. Some tried to scud run; others shot approaches knowing the weather was well below minimums and flew into terrain or lost it on the missed approach. One hit trees 100 feet below the elevation of the mountaintop airport.

Working 310s were flown into serious icing conditions a number of times with results that varied from hard landings to death.

The other category included a number of pilot judgment issues. One pilot and a buddy worked for several hours on a well-out-of-annual 310 with known problems on one engine. They then decided to make an after-dark, gear-down (the gear was questionable) ferry flight to an unlighted airport. The bad engine quit several minutes into the flight, so they decided to return to the departure airport without feathering the prop. They didnt make it.