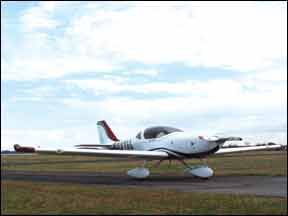 How about this for a challenging design concept? Start with a two-seat speedster with fighter-like handling, slow it down to meet the LSA 120-knot speed limit without excising any of the structure necessary for the stresses of the higher speed, then jump through the ASTM hoops to turn it into a production machine. That is exactly what Arion Aircraft did with its Lightning LS-1, an LSA that is finger-on-the trigger responsive in flight and among the fastest LSAs out there.

The Lightning is one of the few LSAs that is not intended to be used as a primary trainer. “Although a very few buyers have learned to fly in their Lightnings, we did not design it for flight training,” explained Arion’s Nick Otterbach, one of the lead designers of the airplane.

Not joining the masses by creating an airplane targeted at every pilot took some courage, in our opinion, in the dog-eat-dog LSA market. After flying the consequence of their decision, we think Arion has created a pilot’s airplane that is as close to high-performance as the LSA rules allow, while staying just on the safe side of the “I hope I don’t lose it on this landing” feeling faced by someone checking out in a Pitts Special.

Bottom line: Light controls mean that this is not an airplane for every pilot. In our opinion, a pilot who has time in the Grumman American series and knows what rudders are for will check out quickly. A pilot reared in the Piper Cherokee line will take a minimum of five hours to get to an acceptable level of precision, another five to get comfortable and should expect to over-control rather badly on the first flight.

Basics
As evolved from the homebuilt Arion Lightning EAB, the Lightning LS-1 is a composite, semi-monocoque airframe made primarily of fiberglass, with carbon-fiber reinforcement in the wing-roots. The wing spars are fiberglass-wrapped spruce. The basic airframe is the same as the EAB, which has a gross weight of 1530 pounds and cruises above 140 knots. At the LSA max gross weight of 1320 pounds, the structure has been tested to withstand over 9 G positive, although Arion only claims the LSA requirement of 4.4 G.

The engine is a 120-HP Jabiru 3300 with a TBO of 2000 hours, although the manufacturer calls for a top overhaul at 1000 hours. It is a six-cylinder, horizontally opposed, air-cooled powerplant with an ingenious ignition system. A magnet on the engine flywheel creates an electrical field as it passes the two individual magnetos, which then generates the electrical impulse that fires the spark plugs. The system will not work at all below 300 RPM; thus while it is impossible to hand-prop a Jabiru, it also means that the chances of someone being hurt by a prop as a result of repositioning it by hand and causing the engine to fire are essentially zero.

Otterbach pointed out to us that the Jabiru engine requires a plenum over each bank of cylinders for proper cooling. “In addition, the cooling system requires the correct ratio of air through the cooling intakes on each side of the cowling to the other intakes such as the carburetor and oil cooler. Otherwise, the cooling air flow is not adequate. We’ve found over the years that the engine will run well over time so long as the installation allowed adequate cooling air where it was needed. We have a Jabiru-powered Kitfox in our hangar that cruises at 75 knots, and the engine cooling is no problem at all.”

The 30-gallon—28 usable—fuel system carries the fuel in two fiberglass-wrapped wing tanks aft of and protected by the spar.

Crashworthiness
We liked what we saw from the crashworthiness standpoint. Fuel storage was well protected, occupants had four-point harnesses and sat semi-reclined and the landing gear was designed to collapse under shear loads to reduce the chance of flipping the airplane in a forced landing. The Plexiglass canopy could be kicked out to allow egress if inverted, the tail and engine will support the airframe inverted, with the occupant’s head clear of the ground, and the engine mount and cabin are designed to remain intact as the remainder of the airframe collapses/crushes on impact.

There has been an impact sequence involving the removal of a wing via a telephone pole during a half-wit buzz job, leading to an inverted impact. The pilot survived with minimal injuries.

With a max cruise fuel burn of 5.5 hours and a cruise speed of 120 knots, endurance with full fuel is over five hours with VFR reserves. That puts still air range, with reserve, at 600 NM, more at reduced power.

The more realistic endurance is with two fast-food-inflated occupants. The Achilles heel of the LSA world is useful load and the structure for a faster airplane, and the Jabiru engine makes this one of the heavier examples. Our demo airplane had virtually every option possible, so useful load was 487 pounds. Figuring a realistic 200 pounds per person, it left 87 pounds for fuel. That’s a little over two hours of flight, with reserve.

Preflight of the airplane is conventional, everything is easily observed, leaving one to try to figure out where the drag is in this slippery airframe that allowed keeping the cruise speed down to 120 knots. Primarily it’s in the landing gear, the struts are not faired in and the wheel pants are as basic as they get. There is a wing extension outside of the ailerons that moves the flaps up, stall speed down to 44 knots and adds a little parasite drag.

Interior
The forward-hinged canopy has an easy-to-operate latch—if unlatched, the canopy streams open about an inch or so and does not affect handling, however, it cannot be closed in flight. After years of looking at just plain ugly, utilitarian interiors in LSAs, the Lightning is a nice change. It is attractive and welcoming, with materials and coverings more associated with Part 23 airplanes. The non-adjustable seats are set in a comfortable reclining position—think Mooney—with adequate headroom for this reviewer at 6’4”. The rudder pedals adjust over a long range.

Starting the Jabiru means pulling on the choke and turning the key while keeping the throttle at dead idle. Once running, the avionics master is turned on and the Grand Rapids Technologies Sport SX EFIS comes to life with the AHRS aligning while the engine begins to warm up and the choke is no longer needed. Once an oil temperature of 90 degrees F is reached, RPM can go above 1200.

Taxiing is similar to other aircraft steered via differential braking. We had no difficulty tracking the centerline in a quartering tailwind. There is no recommended maximum wind for operation of the Lightning, as there is for some LSAs. When asked about maximum wind, Otterbach initially thought we meant the maximum demonstrated crosswind velocity—15 knots—and was surprised at the idea of a maximum recommended wind speed for the airplane.

Takeoff is with half flaps. Otterbach suggested being ready for the need for right rudder immediately and to apply back pressure very early, similar to a soft field takeoff. Firm right rudder proved to be necessary in what was a brief event—120 HP on 1320 pounds of airplane makes for smart acceleration—and raising the nose early meant the Lightning rolled briefly on the main gear and smoothly launched, transitioning rapidly to a climb at 70 knots.

There is a distinct pitch change with flap movement, once up, with speed at 85–90 knots the rate of climb steadied at slightly over 1000 FPM with the airplane at gross weight. It was immediately obvious that the controls were lighter than most general aviation airplanes, not as quick as a Pitts Special, but a little more sprightly than the Grumman-American line. We agreed that this would not make a good primary training machine.

The rudder is cable-activated, the ailerons and elevator use push rods. We expected an airplane as responsive as the Lightning to not want to stay put for any length of time, however, that proved not to be the case. It was pleasantly stable and rode the increasing turbulence well, with less displacement than other light wing loading airplanes.

The electric trim had a predictable rate and was easy to use during all speed and configuration changes. Maneuvering was, frankly, a lot of fun. Stick forces were light and the controls are well harmonized. Speed and power changes did require more use of the rudder than we’d experienced in most GA airplanes.

Rudder Use
The immediate comparison that came to mind was the P-51 Mustang, which requires large rudder inputs with speed and power changes—the Lightning was similar on a smaller scale. The rudder forces were far less, but they were necessary to keep the ball centered, which, along with the nimble handing, were something that appealed to the Walter Mitty in us. We haven’t thought of the Mustang when flying any other LSA.

Stalls provided no surprises with the power-off, full-flap stall breaking at 43 knots. There was some tendency to roll, easily caught with the rudders, and the airplane was flying again once back pressure was released. The full power stall came at an impressive deck angle and required good rudder coordination to avoid roll off.

In the pattern, the Lightning behaved predictably. Because the airplane is so clean, landings are made with full flaps. Final approach speed is 52 knots and should not be above 60, otherwise the airplane will float. Otterbach explained that extra speed should not be carried on final. There is plenty of energy to flare at 52 knots because of the clean airframe. A go around is not a big deal—applying full power will almost immediately generate a rate of climb well above 500 FPM even with full flaps.

The light controls meant getting used to how little effort was necessary to flare to a nose-high attitude prior to touch down. Our experience was that any extra speed was an invitation to overcontrol when close to the runway.

There was more than enough control authority for the five- to eight- knot crosswind we experienced. Interestingly, slipping the Lightning does not noticeably increase the descent rate or scrub off excess speed—it’s too clean.

The POH includes a syllabus for checking out in the Lightning, something we applaud. The $120,00 basic purchase price of the airplane—about $130,000 well equipped—includes a five-hour checkout, which, in our opinion, is probably about right.

The Lightning LS-1 is not as stunningly quick as a Pitts or Extra, but is one of that species that rewards a pilot who has a sure touch, is on her game and desires something that rewards an extra effort to excel.