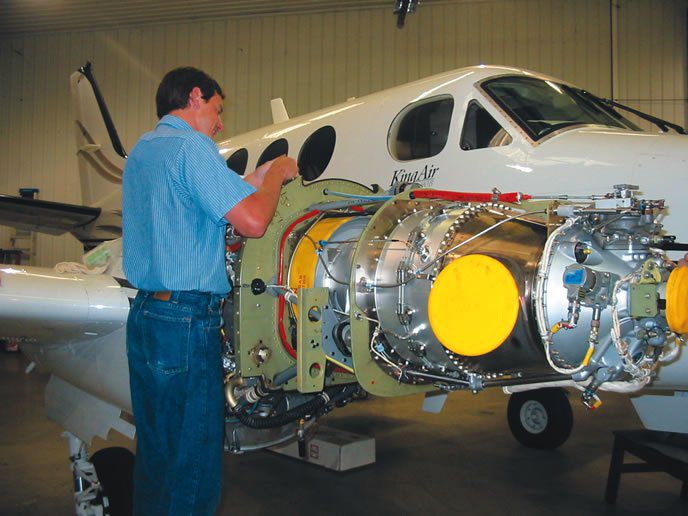 Throughout our conversations with PT-6 operators, sales professionals and shops, one word recurred: Blackhawk, specifically Blackhawk conversions for PT-6-powered aircraft. These loom large in the PT-6 universe because they compete favorably with overhauls and many operators see the economics of upgraded, new engines compared to overhauls as far more favorable.

And that’s what the Blackhawk conversions are: STCs to install more powerful, factory new engines in place of overhauling an existing PT-6. Blackhawk’s Chris Dunkin told us the Blackhawk program current applies to King Airs, Piper Cheyennes, the PT-6-powered Cessna Conquest I and the Caravan.

Basically, a customer turns in a run-out core and Blackhawk provides a factory-new engine to replace it that’s both more powerful and at least marginally more efficient.

Although the new engines have more horsepower, they’re flat rated to whatever limitation the airframe has. For example, in the Cessna Conquest I, the PT-6A-114 is limited to 450 SHP. The replacement engine is a 750-SHP -135A flat rated to 450 SHP, but capable of delivering that full power to higher altitudes than the -114 it replaces. That means faster climbs and cruise speeds for not too much more money than a factory overhaul for a new engine with a factory warranty.

Prices of these upgrades vary by model, but Dunkin told us the King Air C90 conversion costs about $682,000 complete. Blackhawk has a lower-priced option for the C90 in the -28 engines as well.

Although Blackhawk does some engine installation work at its Waco, Texas, shop, most of the conversions are farmed out to approved shops in various parts of the country. The Waco facility mainly does R&D and STC work. For more, see www.blackhawk.aero