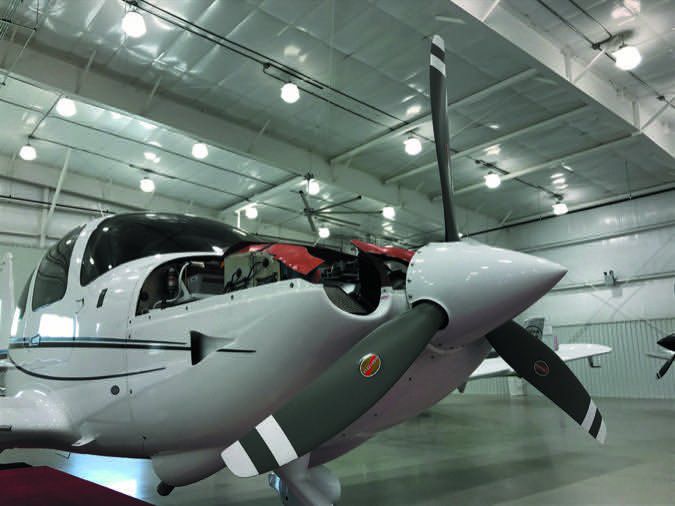 For the 2017 model year, Cirrus released the G6 SR20, which gets both an avionics upgrade and a new IO-390 Lycoming engine.

Cirrus said its decision to re-engine the entry-level SR20 is significant for a couple of reasons. For one, it plans to aggressively market the aircraft to fleet operators who’ve expressed a strong preference for a four-cylinder Lycoming over a six-cylinder Continental. Moreover, the IO-390 substantially reduces weight, while also stretching the TBO for high-use operations.

To see how the G6 SR20 compares to the previous model, we flew one during a recent visit to the Cirrus Vision Center in Knoxville, Tennessee. Here’s a report.

Out From the Shadows

In our view, the SR20 has been overshadowed by the flagship SR22, despite the company’s efforts to market it as a dual-role aircraft. That role includes traveling and training— which we think well suits the SR20. On the other hand, buyers might struggle with pricing. Those who can handle the SR20’s typically equipped starting price (low $400,000) can likely afford the SR22, which starts at around $539,900.

Park a G6 SR20 nose-to-nose with a new SR22 and you’ll be hard-pressed to tell the difference, save for the single exhaust stack on the SR20, compared to the twin pipes on the SR22.

Forget everything you know about earlier cookie-cutter SR20s. Just like the flagship G6 SR22, the new SR20 is available in upgraded paint schemes (and Cirrus’ paint and interior Personalization design), plus it has Garmin’s new G1000 Perspective+ integrated avionics.

In many ways, the SR20 is a good choice for pilots who aren’t ready for the faster and less forgiving SR22, without having to sacrifice styling, avionics capability and safety systems.

Additionally, the new Lycoming adds a layer of simplicity that perhaps didn’t exist with the Continental-powered SR20. After all, there are two fewer cylinders to worry about. As Cirrus’ senior line manager Ivy McIver put it, “From a maintenance and operational perspective, the four-cylinder Lycoming in the new SR20 is simpler and will be less expensive to maintain just because it has fewer parts.”

While the Lycoming IO-390-C3B6 has two fewer cylinders than the Continental IO-360ES, the re-engined SR20 G6 still benefits from a boost in power—up to 215 HP versus 200 HP for the Continental.

Cirrus also certified the airplane with a lightweight Hartzell composite prop (it’s optional), which shaves nearly 30 pounds from the airplane. With the new engine (and lighter avionics), Cirrus was able to change the maximum gross takeoff weight to 3150 pounds—an increase of 100 pounds from the old airplane. With as much as 150 pounds increase in useful load (1030 pounds), you can haul around another passenger, or more of your stuff.

Like the SR22, the SR20 has a 60/40 folding rear seat configuration, which from our experience really simplifies loading items like snowboards and golf clubs into the cabin. The maximum allowable loading in the baggage area is 130 pounds.

Cirrus pegs the cabin payload at 776 pounds when loaded with three hours of trip fuel, plus the typical 45-minute IFR reserves.

The SR20 holds 58.5 gallons of fuel (56 gallons are usable) and managing the system is stone simple with a left/right/off tank selector mounted aft of the throttle and mixture control in the center console. The boost pump is switched on during takeoff, climb, landing and while switching fuel tanks.

Like the G6 SR22, a major upgrade to the new SR20 is the external lighting system and upswept wingtips. Gone is the landing light housed in the front cowling. It’s been replaced by the Whelan-designed Spectra LED wingtip lighting, which houses landing, nav and position lights, plus aesthetic Halo lighting that automatically comes on when you unlock the doors with the new key fob. There’s also under-wing ground lighting for those dark nights on the ramp, plus a variety of new convenience lighting in the footwells, baggage area and around the cabin steps.

The new SR20 benefits from many of the same refinements and creature comforts we like about the G6 SR22, including a standard leather interior, no fewer than four USB charging ports, impressive Beringer brakes and wheels, plus airbag seatbelts for the two front seats.

What makes the SR20 a good training airplane for transitioning to the faster SR22 is the standardized cockpit. Both aircraft share the same avionics/autopilot and the sight picture out the windshield is identical. Standard are the 10-inch Garmin displays, while 12-inch displays are optional.

The Perspective+ has an integrated engine data and fuel quantity display, of course. Engine system health, cautions and warning messages are displayed in color-coded text in the crew alerting system (CAS) window located to the right of the altimeter and vertical speed indicator on the PFD. There’s also a new graphical weight and balance utility. Plug the numbers in for your current fuel status and people/baggage loading and the system does the rest.

The ignition and starter system includes the Champion SlickSTART, which changes the ignition timing and adds energy to the spark to aid in starting. Otherwise, starting the fuel-injected Lycoming is the same as it ever was—prime it, crack the throttle and advance the mixture control as it fires.

The normally aspirated Lycoming IO-390 retains the Cirrus automatic propeller control, which keeps operation as simple as it can get. With a single-lever throttle, a separate cable attached to the propeller governor adjusts the governor oil pressure to increase propeller pitch to maintain engine RPM. The system is set to maintain 2500 RPM from idle through the cruise power setting range, and 2700 RPM at full power. The throttle control has Max, Power and Idle settings. The mixture control is set for full rich during takeoff.

Like the SR22—and any other G1000 aircraft—you run the checklist on the MFD. Cirrus changed the Perspective’s data entry console to one that finally has a QWERTY keypad. That just makes data entry so much easier, from our experience.

We flew the G6 SR20 after flying the turbocharged G6 SR22T. Let’s just say the SR20 doesn’t jump off the runway like the SR22 does. Still, it’s no slouch and the extra 15 horsepower in the new Lycoming is apparent, compared to the Continental-powered SR20s we’ve flown.

At sea level for a 3150-pound SR20, the book calls for a 1685-foot ground roll at ISA conditions. For Cirrus instructors, the rule of thumb is to strictly obey the 1500-foot takeoff and landing distance, and add a 50-percent safety factor. That’s 2500 feet of runway. On the takeoff run, rotate at approximately 75 knots with the flaps at 50 percent. The Lycoming has plenty of climb authority. With two onboard and tanks half full, we saw almost 1200 FPM departing the McGhee Tyson airport in Knoxville, Tennessee. The optional air conditioning system can be left on during takeoff, but you want to turn it off for max climb performance.

Retract the flaps at 85 knots and enroute climb is made at full power. When it’s time to lean the IO-390, leave your Continental IO-360 procedures at home. Lycoming doesn’t condone lean of peak EGT operations. Instead, the Garmin Perspective+ onscreen leaning guidance is based on best economy, or peak EGT. When pulled back to 8.5 GPH, plan on 135 knots. Want to set best power? Enrichen the mixture to 100 degrees rich of peak EGT. At 4000 feet and 75 percent power, plan on nearly 150 knots burning 12 GPH, which yields four hours of no-wind endurance.

Approach and landing in the SR20 isn’t much different than in the SR22, although everything happens a more slowly—that’s good for training. For us, 75 knots on short final worked well and like all SR models, the pitch and roll compression springs create moderate control pressure (and impressive roll and pitch stability), which means you absolutely must keep the aircraft trimmed.

The flaps have three positions: 0, 50 percent (16 degrees) and 100 percent (32 degrees), and the first notch can be extended at 150 knots. Incidentally, the Vpd—for CAPS parachute deployment—is 133 knots.

Another selling point for training operators is the SR20’s engine TBO. For high-time usage (flown more than 40 hours per month), the IO-390’s recommended TBO gets bumped to 2400 hours. The Continental IO-360ES has a 2000-hour TBO.

As for price, the G6 SR20 has a base price of $389,900, which includes 10-inch Perspective+ displays, a three-blade aluminum propeller, a mandate-compliant ADS-B Out transponder (plus ADS-B In) and a three-day transition training package. But this base airplane probably isn’t the way individual buyers might spec a new SR20. Desirable upgrade packages jack the price up in a hurry.

The Hartzell lightweight carbon composite propeller is $12,900; the Cirrus Select package—which includes 12-inch displays with an EVS enhanced vision system, plus eTAWS terrain alerting—is $39,900. There’s also the $27,900 Digital Advantage package, which ditches the individual round-gauge mechanical backup instruments for the four-in-one digital standby instrument, adds Garmin’s Flight Stream 510 wireless system, plus SiriusXM weather and entertainment. Air conditioning is $26,900. All that adds up to a $500,000 SR20. The flagship SR20 GTS, which has many of those options—plus an upgraded appearance package—is $564,900.

The SR20 comes standard with a two-year spinner-to-tail warranty. As we go to press, new deliveries are scheduled out to November 2017. That’s impressive in an otherwise grim new airplane market.

Click here to see a video about the SR20 G6!