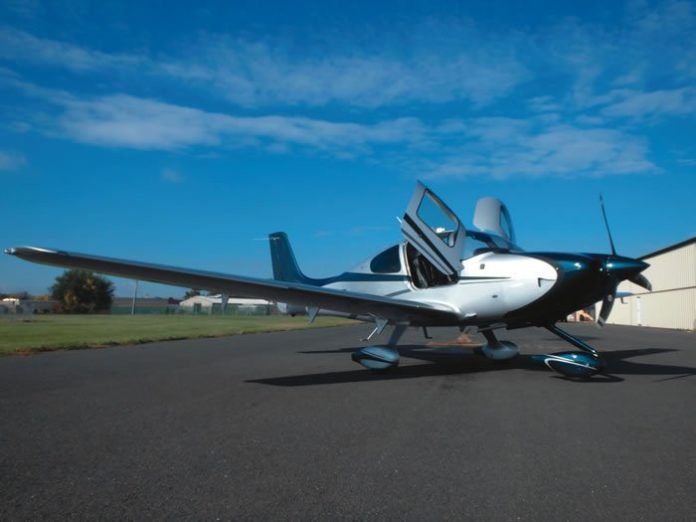 According to GAMA sales numbers, the Cirrus SR22 outsold every other piston single in 2013, including the entry-level SR20.

Whats interesting is that the SR20 arguably has a broader mission profile than the SR22. Cirrus even markets the SR20 as a dual-role aircraft that can function as a trainer and distance traveler. Perhaps that is why SR20s are more likely to end up on flight school ramps than in personal hangars.

With a starting price of $369,000, the 2014 SR20 shares many of the advanced creature comforts, basic systems and design characteristics of the SR22, save for speed, load-hauling capability and icing protection. But for the new pilot looking to someday step up to the SR22, we think the SR20 has a lot to offer for a substantial price delta. Still, its easy to see why its outsold because when tricked out with avionics and styling options, a base-level SR22 has more appeal.

Too tough to handle
That could be true for inexperienced pilots that move right into the SR22. Cirrus sales directors arent afraid to mention that the typical new Cirrus buyer can afford a flagship SR22T-thats the turbocharged model that can easily bring an eye-widening invoice that tops $800,000 when loaded with extras. While a new pilot with these resources may be tempted to put one in his or her hangar, the SR20 could be the better decision, without having to sacrifice styling, avionics capability and safety-enhancing systems.

Remember that the SR20 defined Cirrus mission to build an airplane that was safe, efficient, fast and comfortable. Delivering a product that has speed, efficiency and comfort is easy, but delivering an impressive safety record-something the competing Diamond DA40 has done better (in fairness, the DA40 fleet is smaller)-is a different matter.

Cirrus learned a lot from a time when the SR-series safety record was disappointing, at best. As a result, it has overhauled its approach to initial and recurrent training. See the sidebar on page 7 for more on this training approach.

As with every airplane Cirrus has ever built, the 2014 composite-constructed SR20 comes with a CAPS (Cirrus Airframe Parachute System) and part of the training effort is encouraging pilots to use it sooner than later, if they get into trouble. This is reinforced every time you start the airplane, via a splash screen on the multifunction display that simply says, Equipped with a parachute. Live with it. Its there to remind you and passengers of the parachute handle thats in the overhead, should you need to pull it above 600 feet AGL. While the CAPS may be the last resort when things go bad, there are plenty of other standard safety systems that might avoid a pull in the first place, including Garmins GFC700 autopilot with electronic stability control that provides stall protection, hypoxia check and automated descent mode.

The cockpit is enclosed in a carbon fiber roll cage, the instrument panel is designed with crashworthiness in mind and the two front seats come standard with airbag seatbelts. Even the fuel system and landing gear is smartly designed. Fuel (58.5 gallons total and 56 gallons usable) is stored between the wing spars and well outboard of the passenger cabin. The fixed landing gear is designed to absorb energy and flex into the wing inboard of the fuel cells, helping to keep the cells intact during crashes and hard landings.

Speaking of hard landings, newer SR20s have an Oleo strut on the nose wheel to help cushion the impact should you arrive less than gracefully. We can attest that the Oleo strut on the demo airplane worked well.

Engine, accessories
While Cirrus has made numerous refinements and upgrades to the SR20 over the years, it has retained the 200-HP six-cylinder Continental IO-360-ES, an engine that we found incredibly smooth. Its mated with the standard three-blade Hartzell aluminum propeller (gone is the two-blade prop found on earlier models). Engine operation couldnt be simpler because throttle and RPM control are done with a single lever that moves both cables. Full throttle yields 2700 RPM and power reductions automatically decrease the prop to 2500 RPM until the manifold pressure gets too low to maintain it. Theres little to do with the mixture control until cruise flight.

New for 2014 is the Beringer performance braking system, a single-caliper system with tubeless tires and redesigned wheel fairings that allows easier access to the brake and tire valve stem during preflight checks. Beringer Aero has roots in the Formula One and motorcycle racing world and its brakes are used on the Pilatus PC12NG turboprop. Cirrus said it made the switch because Beringers fluid technology is designed to withstand higher temperatures. The result is less fade and sponginess under hard braking.

We got aggressive with the Beringers on a high-speed turnoff and immediately sensed more confident stopping power than the older braking system. The Beringer system can be retrofitted to Generation 3 and newer aircraft, starting at $15,300. In 2012, Cirrus switched from incandescent to LED exterior running lights. This includes strobes, navigation, landing and taxi lights.

Initial max gross weight for earlier SR20 models was 2900 pounds, but its now 3050 pounds. The POH says you can load 130 pounds in the baggage area, which can be accessed by folding down the 60/40 split rear seat. The back seat can physically accommodate three people, and the rear cabin is equipped with three headset audio stations.

At 3050 pounds, the SR20 is heavier than many models powered by a 200-HP engine. Takeoff and climb performance is adequate, but not nearly as energetic as the 310-HP SR22, although takeoff in the SR20 is procedurally the same as the SR22. With the flaps deployed at 50 percent, apply slight back pressure early in the takeoff roll to take the weight off the nosewheel and the airplane will fly itself off.

With two light adults and full fuel, we saw 800 FPM in a full-power, sea-level climb. Sea-level, non-obstacle takeoff distance is published at 1478 feet at ISA and gross weight conditions. However, owners that operate in high-density altitude situations report less-than-comfortable takeoff performance, particularly when loaded at or close to gross weight.

Lean of peak, expect 135 knots on a miserly 8.5 GPH. Still-air range is roughly 675 miles, when counting on 45 minutes of fuel reserve.

Although the CG tends forward rather than aft, the aircraft is easy to trim accurately for level flight when its properly loaded. The flight controls are a combination of push rods, cables and bell cranks. The elevator and ailerons are made of aluminum, essentially the only major structures on the airframe that arent made of composite.

The SR20 uses pitch and roll trim compression spring cartridges to adjust the aileron and elevator to the trimmed angle of attack. The benefits are recognized in turbulence when the autopilot isnt flying because the aircraft has a natural tendency to return to level flight. But the springs (they are big ones) can be the enemy to the pilot that doesnt trim the airplane properly on a landing approach. If you try and fight them, they will win.

Another battle youll likely lose is spin recovery. The aircraft is not approved for spins, and the POH advises that since it has not been tested or certified for spin recovery, the only approved and demonstrated method of spin recovery is activation of the CAPS. On a side note, Cirrus told us there have been 47 successful CAPS pulls throughout the entire Cirrus fleet, not necessarily related to spin conditions.

Every SR20 is an all-electric airplane and comes standard with the two-screen Garmin Perspective integrated avionics with 10.4-inch displays, GFC700 autopilot, 1090ES ADS-B transponder, dual AHRS, a flight management system keyboard, engine indicating system, dual alternators, dual electrical bus and dual lead-acid batteries. The primary 75-amp alternator is belt-driven and the secondary 40-amp alternator is gear-driven. Its permissible to take off with the optional all-electric air conditioning system on, since the system is connected to the primary alternator. The air conditioner adds approximately 50 pounds.

Big options, Bigger price
Thats the best way to describe the SR20 pricing structure, which starts at $349,000. From there, buyers have the option of adding three packages, including the $39,900 Perspective Plus avionics upgrade. This is the 12-inch display upgrade, a backup air data computer and the EVS camera system. The Perspective Alerts and Awareness package is $28,900 for synthetic vision and Jeppesen electronic charting­-silly expensive, in our view.

You could buy the flagship GTS model, which combines all the options above, plus traffic and terrain systems, with the choice of Carbon or Platinum appearance. Add air conditioning and the price jumps to $506,800-thats more than the $489,900 base SR22 (which is fairly stripped.) A Diamond DA40-XLT is around $498,000 and Cessnas flagship Jet-A-burning 182 Skylane JT-A is around $515,000.

The aircraft flown for this report was a fully loaded GTS Platinum edition that was leased back to Nassau Flyers flight school in Farmingdale, New York. Thats the typical mission for the SR20 and perhaps a good arrangement for high-end buyers that arent ready for the more demanding SR22.
Contact www.cirrusaircraft.com.