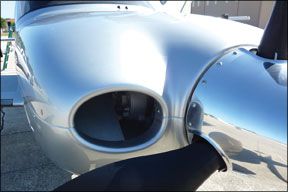 When Cirrus went its own way and offered the Tornado Alley Turbo as an STC in the SR22, the market practically planted a wet kiss on the project. Now, with a new model called the SR22T, Cirrus is following up with a groundboosted rather than a turbonormalized system.

This time, it did the engineering in-house rather than relying on Tornado Alley, although its clear that Cirrus took a page

from the TAT book in terms of overall design, especially intercooling and leaning strategy.

And how about performance? From a brief test flight in May, we conclude that the SR22T approaches par with the TN model but appears to be bit slower. Well give our data below, but without doing a side-by-side flyoff, we cant make a definitive judgment on performance.

Although designed to run lean of peak, it burns a little more fuel, which we would expect, given the low-compression pistons. Otherwise the airplanes are so similar that we have to ask: Why do this?

In its marketing summary, Cirrus listed changes in the airplane and their benefits. These include full-time 2500 RPM operation for smoother running and power changes, a dynamic leaning bug on the Garmin Perspective system, a 15-pound lower empty weight and a new oleo strut on the nosegear.

The claim that may catch the attention of many buyers is this: “This lower compression ratio engine is more tolerant of lower octane fuels and reduces the risk for customers with the future of…fuel in question.” We take this to mean that Cirrus sees the SR22T as being capable of operating on less than 100-octane fuel.

Were not sure if that will be a hard sales point, but if it is, customers will need to ask Cirrus to clarify the claim. Some may also be thinking twice about buying the normally aspirated SR22, whose IO-550-N sports the same 8.5 to 1 pistons as the TN. Heres what Cirruss Todd Simmons said when we asked about this:

“We have implemented TCMs suggested path and will be working very closely with them to ensure a seamless transition for our customers to whatever fuel the industry selects. We are confident based on information TCM has shared with us that we have more than bounded the problem for our flagship product here, and also have a viable technical path for the same issue as it relates to the normally aspirated SR20 and SR22.” Pricewise, the new SR22T will be across the board with the TN version, assuming equivalent equipment. That means invoices typically a little north of $600,000, variable with options.

While the TN model turbonormalizes the IO-550-N, the SR22T models uses a groundboosted TSIO-550-K with a pair of turbochargers controlled by a single wastegate. Maximum normal boost is given as 36.5 inches MAP for 315 HP at 2550 RPM. (The TN has 310 HP at 2700 RPM, so on power, the two are essentially a wash.)

We uncowled the engine and had a look topside and a peek below the deck. Cirrus clearly followed the TAT lead in using large-volume intercooling; the coolers are larger than those used in the STC project turbo that Continental was showing at Oshkosh last year. Cirrus took pains to point out that the SR22T is in no way related to the Continental project, which used a different variant of the TSIO-550.

Other changes include new induction plumbing consisting of a pair of pipes running through filters on the forward cowl. For alternate induction air, the system has an automatic magnetic suck-open door. Theres also some increased clearance for exhaust cooling and two new louvers on the bottom of the cowl. For this model, Cirrus did away with the cam-and-cable prop control and hardwired the prop at 2500 RPM which, says the company, accounts for the smoothness and quieter cabin. We couldnt say it was noticeable in the cabin, but Cirrus says

Other minor changes include the addition of an oleo strut on the nosegear up inside the lower cowling meant to absorb shock on the nosegear. The avionics package-the Garmin Perspective-remains top of the line for this market and to assist in leaning, the system now has an electronically displayed leaning bug on the fuel flow indicator. The system calculates the correct lean-of-peak flow-the POH lists no full rich settings-and you merely drag the flow back and match the needle to the bug.

Weight wise, Cirrus says the SR22T is 15 pounds lighter than the TN. The example we flew had a useful load of 995 pounds, leaving 443 pounds with full fuel. Thats two people and a bunch of bags or four people and 50 gallons or so. As far as overhaul costs go, the TSIO-550-K is more expensive to overhaul than the IO-550-N, even if the TAT turbos are included. Although the K-model isnt yet listed, the TSIO-550-C used in the Columbia/Corvallis is a good benchmark. It carries an installed overhaul price of $60,000, according to the Bluebook Price Digest. The price for the IO-550-N is $33,000, plus the cost of the turbos, bringing the total to under $50,000.

We tried the airplane briefly from our homebase in Florida on a warmish, ISA +15 day. Obviously, apart from fuel flow and cruise speeds, the largest concern with a turbocharged engine is heat rejection. The turbonormalized version from TAT enjoys a slight efficiency and heat rejection edge and its well-designed intercooling and baffling makes the most of that. Its one of the coolest running turbo setup weve seen.

After some brief maneuvering, we did some step climbs to altitude to test performance. Down low, at 3000 feet, we noted a true airspeed of 167 knots on 17.5 GPH. Thats 80 percent power, by the way, and on the lean side of peak, which is all the power table provides. Neither the TN nor the turbocharged version have much advantage over the normally aspirated

SR22s at low altitudes because all three make the same horsepower. As the climb progresses, however, the boosted engines do their stuff.

Unfortunately, one of the TIT sensors was faulty, so we could record only one temperature source. At 3000 feet, we saw 1640 degrees on the TIT with the hottest CHT at 366 degrees. Both are well below the POH stated limits.

Climbing to 12,000 feet and in level flight, we recorded 1620 degrees TIT with the hottest CHT at 378 degrees. Once the airplane settled out, it was truing 188 knots on 17.6 GPH, which is about 5 knots better than the POH claims, according to our checks.

Since many owners of turbocharged airplanes fly in the high teens, we headed there next, performing a slow airspeed, high-angle climb on the way up. As expected, this pumped up the CHTs, but they remained below 400 degrees. At 17,500 feet, true airspeed settled at 199 knots on 17.8 GPH, again a little higher than book on airspeed but .2 lower on predicted fuel flow. The highest CHT was 386 degrees-not too alarming, but we would rather see it lower. We allowed 10 minutes for it to stabilize.

The chart on the previous page shows our noted data from our SR22T flight and also some TN numbers. For comparison purposes, we hauled out our test data from a SR22 TN flight conducted in 2008 with a Cirrus demo pilot at similar altitudes but on a cooler day. At 17,500 on that flight, with an OAT of -16 degrees C, still a little warmer than standard, the highest CHT was 348 degrees while the highest TIT was 1645. We recorded a true airspeed of 212 knots on 17.5 GPH. To be fair, weve seen CHTs as high as 380 in the TAT system. But thats the limit temp.

And this is where things get interesting and also confusing. We took our numbers to Cirrus which said its own engineering test data revealed similar speed envelopes for the two airplanes and it believes our airspeeds for the SR22 TN arent represenative, but Cirrus concedes the TN might have a slight speed edge. To sort this out, we checked with TN owners who reported typical cruise speeds in the 201 to 205 knot range.

Of larger concern to us is cooling. According to the POH, Continental and Cirrus are allowing normal cruise CHTs as high as 420 degrees which we simply dont agree with. Continental has had long-standing issues with premature cylinder wear and those kinds of temperatures cant be helpful. We would prefer to remain at least below 380 degrees and our flight was just too short to see if that is doable. Cirrus insists that cooling isnt an issue with the SR22T.

The SR22T is clearly a strong performer, but we have concerns about it. First, in the SR22 TN, Cirrus marketed what was accepted as one of the best turbocharged systems ever developed and with more than 800 out there, it has a wildly loyal customer base.

Our surveys indicate that owners of these airplanes fly them a lot and are enthusiastic about their performance, reliability, economy and service history.

In this context, the SR22T may be a harder sell for Cirrus. By dint of higher overhaul costs and fuel burn, its operational costs are a bit higher and our brief flight trial suggests its not quite as fast as the TN version. Again, we would like to see a wing-to-wing flyoff before committing to that. The speed difference may be real or it may get buried in the inevitable variation between airframes. We think a perspective buyer would be advised to fly both models, since Cirrus says both will remain in the active lineup, at least for now.

The CHTs we saw, while acceptable, arent quite as cool as the TNs. Until we see more operational history, we simply cant judge the heat issue on one flight. As noted, we just dont agree with running routinely at CHTs above 400 degrees in anything, given the potential for cylinder failures.

We like the addition of the leaning bug and we thought the throttle action was smoother without the cam-and-cable gadget. The fixed RPM introduces some worries about ring flutter on fast descents, but we could live with that until service history shows it to be a problem (or not).

Further, Cirrus built an exceptionally good service history with the TN but is now setting the clock back to zero with a new installation. It may work out just fine, but well await customer experience before judging it.

All things being equal-and they pretty much are here-we would tilt toward the TN version for now. Well take another look after Cirrus has had these airplane in the field for awhile.