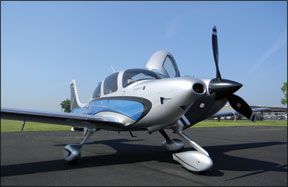 The fifth-generation Cirrus SR22 isn’t an entirely fresh model. Instead, it’s a compilation of advanced features and improvements that Cirrus has added to the aircraft over the past few years.

Whether it’s the new paint and interior styling options, more advanced avionics that come standard, or the bold new gross weight increase, Cirrus’ dedication to improving and advancing the product line proves why the SR22 has consistently outsold every other certified piston single. As we go to press, production order slots for the new SR22 G5 are sold out well into the fall of this year—encouraging in an otherwise declining aircraft sales environment.

We recently visited Cirrus headquarters in Duluth, Minnesota, plucked a new SR22T G5 turbo model from the flight line and hauled it halfway across the country—a mission the aircraft easily delivers with comfort, efficiency and utility.

New Fighting Weight
Part of the aircraft’s utility is courtesy of a new 3600-pound gross weight, up from a previous 3400 pounds. The new weight increase means you can load a SR22T commonly equipped with air conditioning, certified de-ice package, full fuel (92 gallons usable) and three 180-pound occupants. The weight increase also allows you to load more of your stuff—or another small passenger—into the previously-introduced 60/40 rear seat.

With the 40 portion of the rear seat folded down, we loaded a few full-size golf bags, luggage, flight bags and some other space and weight-eating gear with ease. The rear baggage area can accommodate 130 pounds of whatever you can stuff in. To be sure, this overall utility is unmatched by few if any other four-place singles.

If you’ve ever flown previous generation SR22s, you’re familiar with the challenges of slowing the aircraft to the 119-knot initial flap extension speed. But the G5 changes that for the better—with a new 50-percent initial flap extension speed of 150 knots. The last notch of flaps comes down at 110 knots—an increase from a previous 104 knots. The payoff keeps getting better, since there is an extra 3.5 degrees of flap extension, for lower landing speeds. Many pilots have hammered Cirrus for not installing speed brakes on the slippery airframe, but the new flap configuration should keep most pilots happy.

To accommodate the new gross weight increase, Cirrus beefed up the main spar, strengthened the landing gear and added extra layers of composites to the airframe. But strengthening the airplane also meant shaving some structural weight wherever possible—a problem not solved with the CAPS (Cirrus Airframe Parachute System).

To make the airframe touch down at similar impact forces as previously certified, the size of the parachute had to be increased from 55 feet to 65 feet in diameter—requiring a larger and more powerful rocket to fire the heavier parachute. To save some space, Cirrus designed a more compact and modern ignition system that’s fired via redundant electronic circuits. Pull the CAPS handle and the circuit closes, igniting the rocket. You can now pull that handle at 140 knots, increased from an old 133-knot deployment speed. The whole-airplane parachutes are still provided by BRS (Ballistic Recovery Systems) and require a mandatory 10-year repack interval.

Ergonomic Integration
Slide into the cockpit of the new SR22T and you’re greeted by one of the most integrated flight decks found in a single-engine piston aircraft. If you’re coming from an earlier-gen Cirrus with Avidyne Entegra and GNS430 package, the new Garmin Perspective cockpit will be like flying an entirely different aircraft. More on that in a bit.

Cirrus shaved some weight from the interior materials but the fit, finish and creature comforts have never been better, in our view. It’s also a quiet cabin with limited amounts of engine vibe and plenty of personal space for crew and rear-seaters alike.

Cirrus nailed the ergonomics and much of that has to do with the Garmin Perspective avionics suite—which now includes the integrated GFC700 autopilot as standard and EVS infrared camera as optional.

There’s also the new GMA350 audio control system that excels at delivering high-end comm radio performance, while also distributing the SIRIUS/XM radio to each seat on the intercom.

The Perspective avionics comes standard with 10-inch PFD and MFD screens but according to Cirrus, most buyers opt for the optional 12-inch displays. The big PFD makes hand flying instruments a no-brainer, with Garmin’s SVT highway-in-the-sky synthetic vision. As long as you keep the flight path marker within the magenta-colored boxes, you’re on course. There are also old-school flight director command bars, but the highway-in-the-sky video-game-like guidance dominates. This is the drill when the GFC700 integrated autopilot isn’t doing the flying. And flying it does. Simply put, if you aren’t the type for programming the airplane to fly where you—or ATC—wants it to fly, then this isn’t the airplane for you. Whether it’s a climb or descent to altitude at a specified airspeed or a fully coupled precision GPS approach to the runway threshold, the GFC700 flight control system can get you there if you know how to program it.

While you’re managing the automation, the Cirrus gets you there in comfort, with automotive-style environmental controls—with three-speed fan, recirculating and defroster modes—and excellent air conditioning and heater performance.

Easy Performance
The SR22T is powered by the 315-HP Continental TSIO-550-K twin turbocharged engine. Every piece of engine data is monitored on the MFD screen (with critical data also displayed on the PFD). Gone are the mechanical fuel quantity gauges that used to live next to the fuel selector between the two seats. Instead, new fuel-level senders with electronic fuel quantity data is displayed on-screen, providing far more precision than most mechanical fuel gauges. The system helps keep fuel balanced between the left and right tank, periodically reminding the pilot to switch tanks with onscreen CAS alert messaging and warnings.

In many ways, operating the turbo SR22 is easier than the normally aspirated model, thanks to simplified leaning and power management.

Departing Duluth’s Runway 27, it was a simultaneous application of full power and a lot of right rudder as the TSIO-550 spools to 36 inches of manifold pressure and 2500 RPM. As with all Cirrus models, the propeller governor is set in a fixed position, requiring no prop control.

Max weight liftoff speeds—and subsequent ground run—have increased from a previous 72 knots to a new 80 knots, requiring 1239 feet of ground roll. The stall speed is up from a previous 58 knots to 60 knots.

The 80-knot rotation speed comes quickly and if you’re holding some back pressure to keep the weight off the castering nose wheel, the airplane effortlessly jumps off the runway. Through 90 knots it’s flaps up (from the 50 percent takeoff position) and establish a 120-knot cruise climb.

Rich-of-peak climb is a simple full-power affair and lean of peak is equally as easy, especially with the Perspective Lean Assist mode, which is standard on the normally aspirated model. When the ASSIST soft key is pressed, the system initially highlights the number and places a light blue box around the EGT readout of the cylinder with the hottest EGT. The system continues to detect peak EGTs for each cylinder lean of peak as the fuel flow is decreased, and the peak of each cylinder’s EGT is indicated by a light blue marker on the graph. Once all cylinders are lean of peak, the last cylinder to peak is denoted by the “Last” annunciation below its bar on the graph.

Leaning the turbocharged engine is about as simple as it gets. Pull back to 30.5 inches and lean to the cyan-colored line on the fuel flow indicator. We saw every bit of 900 FPM in a lean of peak climb. It was a cold day, and the CHTs remained well below the 420- degree range noted in the POH. In a full-power climb, the POH says you’ll see 1200 FPM, which we confirmed before pulling the power back.

The SR22T is certified to 25,000 feet, where it cruises at 213 knots true. After one brief level off, we climbed directly to 19,000 feet—where time-to-climb was approximately 40 minutes. Burning 17 GPH, the aircraft settled into 195 knots true, which is right out of the book. At one point, the airspeed indicator flirted with 200 knots true at that same fuel flow.

The aircraft has an integrated and graphical enroute fuel planning feature. The dotted green rings on the moving map display indicate the available fuel range­—at the current power setting—with one hour of fuel remaining.

A solid green ring shows where the aircraft will be out of fuel. The endurance ring shrinks—or expands—as you richen or lean the mixture. There’s just no excuse for running out of fuel in these aircraft, given this level of fuel planning integration and simplified fuel management.

Ultimately, we flew from Duluth to Hartford, Connecticut, non-stop in four hours—landing with close to one hour of fuel remaining, a comfortable reserve.

Want one?
Despite the sobering asking price, Cirrus delivers a lot of airplane to buyers with qualifying bank accounts. The starting price of the base SR22T G5 is $569,900, which includes XM datalink weather and entertainment, ADS-B transponder, electronic charts and SVT synthetic vision. Add popular options like dual 12-inch Perspective displays, certified icing protection, traffic alerting and air conditioning, and the price soars to around $700,000.

Cirrus offers the Xi Individualized exterior and interior design options, to add a personal touch to your SR22 interior patterns and paint work, for example. Gone are the days of the cookie-cutter Cirrus—where all airplanes looked alike. These days, Cirrus custom paint work sets a new standard for ramp appeal.

Cirrus also offers the Vision Inspired package, with tri-color paint work and other swagger that recognizes the Vision Jet that’s currently in development. Buy one of these special SR22 models and you’re recognized as a special member of the Cirrus family—earning a discount on a Vision Jet order slot—a project we’re watching closely.