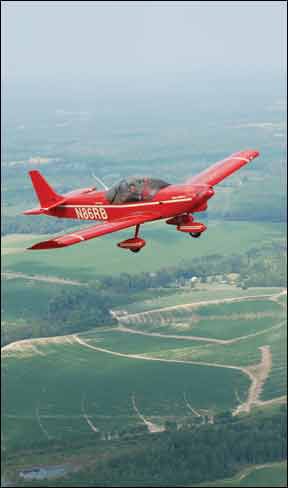 For taxonomy purposes, the aviation press seems to sort light sport aircraft into two broad categories-fun flyers and cruisers or “go-places airplanes.” Ostensibly, the divider is speed. Fun flyers like the Cub clones cruise a little faster than 100 MPH and the cruisers seem to manage as much as 125 MPH. Not a huge difference to be sure, but enough to make short VFR cross-countries tolerable, if not expediently routine. Another way to look at the sorting of LSAs is sports car versus utility vehicle.

Into this marketing equation, Eastman Aviation has inserted its CH650 low-wing LSA, a cruiser thats decidedly on the sports car end of the spectrum. If youve noted a certain sameness in the look of low-wing cruisers, theres a reason for it. Against the limitation of a 132 MPH limit, there are only so many places a design can go and the CH650 has been there-for years.

As we reported in the June 2011 issue on Eastmans unique utility model, the CH750, the CH650 springs from the prolific Chris Heintz, whose Zodiac line is well known in the kit industry, with hundreds flying. Hientzs offshoot companies-Zenair in Canada and Zenith Aircraft in Mexico, Missouri-are as close as the amateur-built and LSA segments get to a multi-national airplane company, albeit a modest one. As have other manufacturers-Kitfox and RANS, for example-Zenith is plying both the experimental and LSA side.

But Eastman is not a Zenith daughter company, rather an independent entity that simply buys subassemblies from Zenair and assembles them under its own brand, sort of like Wal-Marts aspirin actually being made by Bayer.

As detailed in the sidebar on page 16, Eastman is located at Heart of Georgia Airport in Eastman, Georgia, a couple of hours south of Atlanta. It occupies a hangar that includes a paint shop. If the CH650 looks like a Zenith 601, it should. These are essentially the same airplane, albeit with minor modifications. The most noticeable is a larger canopy and a more swept vertical stabilizer/rudder assembly. (Like other Zenith designs, the vertical assembly pivots on a post; there is no separate, hinged rudder structure.)

Unlike most other LSAs, although certainly not unique to the industry, the CH650 is powered by a Continental O-200-D rather than a Rotax. According to Eastman, there are two reasons for this: One, they prefer a traditional aircraft engine and two, theyre pushing the idea of an American-made LSA, never mind that a Chinese conglomerate owns Continental and Zenair is in Canada. We think “North American” applies and we give the company credit for trying.

Construction wise, the CH650 is typical of all the metal LSAs in that its riveted aluminum and, typical of Zenith designs, its as light as it can be structurally, a fact that may have gotten the design into trouble after a series of CH601 fatal wing failures. (See the sidebar on opposite page.)

And the design needs that weight saving, because by using the O-200-D, it gives up some weight advantage to the Rotax-powered LSAs. Empty weight for the CH650 is typically in the 850-pound range, which is on the heavy side of average for other LSAs weve tried. It carries 30 gallons of fuel, 28 usable, for a practical endurance of 3.5 hours or so, with reserve, at high cruise settings. Call that just short of 400 miles in still air.

Its Eastmans view that the CH650 can be flown under IFR by a properly trained pilot and with the airplane equipped accordingly. That means fitted with TSOd instruments and radios and, oddly, that means steam gauges. The Dynon glass the airplane would typically be equipped with-the D100 and D120 paired, plus a Garmin 496, an SL40 comm and a GTX327 transponder-arent TSOd, so IFR isnt technically legal. (The SL40 is TSOd.) We wonder how many owners honor that technicality in an airplane thats otherwise so capable. Its telling that none have been ordered with steam gauges because owners have declared a preference for glass.

BRS parachutes are also an
option, exacting a 40-pound hit on payload. Its our impression that BRS hasnt seen much uptake in the LSA segment, less because of expense than payload penalty. Speaking of expense, the base price of the CH650 is a reasonable $99,500. But typically equipped, it sells for what has become the sweet spot in the LSA market, and thats between $112,000 and $120,000, but much higher if you throw all the options at the invoice.

Although most of the low-wing LSAs look like clones at a distance, they definitely dont fly the same nor are the ergonomics identical. That particularly applies to the CH650 from the moment of ingress. As you can see from the photo at left, theres little space between the front edge of the seats-non-adjustable-and the bottom lip of the instrument panel. Further, the seats rake back at a sharp angle; theyre not quite F-16 recliner seats, but theyre close. Taken together, this produces an odd effect: The top of the stick comes to well above the mid-chest area, but its so far forward that the reach feels similar to other aircraft. But its definitely a higher stick. The panel is also a long reach and maybe a bit of a lean forward. We wouldnt call it uncomfortable so much as different and certainly nothing like the SportCruiser

Visibility is superb, although due to the low seating angle, the cockpit walls hit high on the shoulders. The baggage compartment, which is adequate if not generous, is an easy-to-access shelf behind the two seats. That makes it perfect for grabbing stuff during cross-country flight. Most of the low-wing, canopied airplanes are bake fests on a hot day, but the CH650 is not so bad. It has an effective adjustable sunshade inside the canopy and the cockpit itself is well ventilated with blast vents. You can also taxi with the bubble propped open. (It hinges from the front.)

Most of the LSAs use differential braking, but the CH650 (and its stablemate 750) actually have steerable nosewheels through a rudder/bungee arrangement and it shows. Both airplanes steer with laser-like precision on the ground, a refreshing switch from the pitch-and-jerk taxi turns typical of some LSAs.

Takeoff performance is typical, given that all 1320-pound low-wing airplanes with 100 HP are likely to feel the same. Pitch forces are light, but nothing like the twitchiness of the SportCruiser. Roll, on the other hand, is surprisingly heavy for a small airplane, perhaps due to control circuit issues but more likely a perception issue caused by that high stick position. Its harder to get a good purchase on it, giving the illusion of more resistance than may actually be there.

We found the rudder forces quite high. It takes a good push to move the fin. This may relate to the pivot-post rudder design or, as demo pilot Gary Webster told us, some of it may be due to the rudder/bungee interconnect for the nosewheel steering.

Stalls are what youd expect, although because of the low seating position, the perceived deck angle seems high. The airplane will lapse into parachute mode, with some pitch bobbling and roll excursions that dont seem to ready to snap into a spin. The pre-stall burble comes on all at once, but its noticeable and not likely to

be missed by a pilot whos paying just a little attention.

One thing we think needs work is this airplanes tendency toward neutral stability. If the stick is displaced downward from a trimmed airspeed, we found that its sluggish to return to the trimmed speed. In fact, we terminated a phugoid trial just as the airplane was headed for redline, with only a hint of nose recovery. It did the same with a pitch up. Were not able to say if this is a fault in the design or control friction, but ASTM airplanes are supposed to be strongly positively stable. Zeniths Matt Heintz told us Zeniths test revealed that the airplane is positively stable and he suspects control friction was the issue in our demonstration.

In the pattern, the payoff for this speed is that it takes some attention to get this thing to slow down. It hops right up to pattern altitude just off the crosswind, at which point the power needs to be yanked back smartly to keep from accelerating beyond the flap limit. Once the flaps are down, which requires a bit of retrimming, the airplane will slow nicely to a 60-knot indicated approach. With predicable pitch forces, it lands easily.

Overall, the CH650 seems like an honest, straightforward low-wing cruiser. Its neither a standout nor a laggard, but a middle-of-the-pack, credible performer. Not enough are in the field to judge them, although the well-regarded CH601 serves as a good bellwether. The fact that Zenith stepped up and addressed the wing structure issue indicates that it stands behind what it designs and builds. Furthermore, we like Bill Bryces approach to sustaining an LSA company based on modest demand and low expenses. That smacks of more realism than the light sport segment has thus far shown.