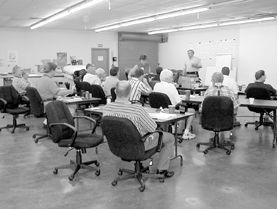 The goal of this seminar is to teach you how to safely and efficiently operate your piston engine-particularly high-performance engines-with a degree of sophistication and confidence far beyond anything the POH can deliver.

Although the course emphasizes use of GAMIjectors and leaning of high-performance engines, the material covered is a broad and detailed treatment of engine theory and operation in general. In fact, much of the material is revolutionary and it will be an eye-opener for pilots whose engine operating training consists of a two-minute review of the POH leaning section.

High-level concepts such as preignition and detonation are covered in detail and thanks to GAMIs sophisticated engine test stand running in real time, attendees can see these concepts vividly demonstrated. Smart use of the JPI 700/800 series engine monitors is also covered and many old wives tales are dissected and disproved-or at least brought into serious question.

The FAA thinks enough of this course for it to qualify as annual IA refresher training but that doesnt mean you need to be a mechanic to derive benefit from the seminar. (It also qualifies for FAA Wings program credit.)

The course material was developed in conjunction with GAMI by Walter Atkinson and John Deakin, under a separate organization called Advanced Pilot Seminars. Atkinsons day job is as a dentist but hes also an A&P and CFI and an experienced speaker. Deakin is a 36,000-hour retired airline captain who owns GAMIjector set number 1. He writes frequently on engine topics for our sister online publication, www.avweb.com.

As chief engineer of GAMI, Braly is the developer of GAMIjectors and the PRISM electronic ignition system. He has an encyclopedic knowledge of the subject of engine operation and is an outstanding speaker, due in part, perhaps, to the fact that hes also a practicing attorney.

Each of these seminars will be somewhat different in that class begins on Friday evening with a question session that shapes some of what will be covered in the course. These were written down on charts and answered as the class progressed through the weekend, ending on Sunday.

Our group size of 22 was just right for both individual attention and a good group dynamic. We had all types of attendees from flying dentists to overhaul shop owners to an IA to retired airline pilots.

Id give APS high marks for material preparation and presentation. A digital projector and computer delivers PowerPoint briefing charts-some animated, such as the JPI monitor analysis. There are also detailed handouts in a three-ring binder which includes excerpts from selected POHs. A reprint of the Curtis Wright radial engine series was included, which turned out to be a gold mine of excellent conceptual information on lean operation, detonation, preignition, EGT theory and so on.

What was most impressive, however, was the live engine test stand operation, which is remoted to the classroom for the multi-channel graphical display of each engine cylinder during the combustion event.

This gives the class far more information than does a simple engine monitor. The engine was controlled by the instructor as various modes of operation were explored, including what-if questions by the attendees.

We also viewed a video of Deakins turbo-normalized IO-550 Bonanza from walk-around, through climb, cruise and a slam-dunk descent, with emphasis on use of the JPI engine monitor for appropriate and efficient leaning.

APS and GAMI went out of their way to provide comfortable facilities. I was happy to find an air-conditioned, well-lighted and quiet section of the large hangar area dedicated to the class. We were seated in comfortable, tilt-back office chairs and for a course comprising three days, this is no trivial consideration. Phones and fax machines were available to all, free of charge.

Much of the food is furnished, too, varying from home-cooked meals served in the classroom to a catered, world-class barbecue the following day.

LOP Dissected
One of my concerns about running an engine lean of peak EGT/TIT is that theres a potential pilot workload increase as you try to monitor an engine analyzer while fishing for the most beneficial LOP values. A JPI analyzer is specifically recommended by GAMI to address this issue, by the way.

The latest JPI versions have a section in the manual on how to operate lean of peak and the use of GAMIjectors. However, the GAMI methods, as explained in the APS seminar, are simpler and are covered in considerable detail.

In addition, I was concerned about the time spent getting from well rich to well lean, both of which are safe at high power if theyre done correctly. The instructors use the term big mixture pull to describe how to lean from initial full rich to lean of peak in one six-second pull.

You can feel this in the airplane as well as see it on the JPI analyzer. Braly demonstrated this for me in his own Bonanza and I found it easy to learn and apply the lesson.

Another term used in the simplification paradigm is the red box. This is an area where the greatest cylinder pressures will be encountered and high-power continuous operation puts the greatest stresses on the engine.

Going from rich of peak to lean requires an excursion through the red box and APS instructors explain how to do this. They also use a term called parking the engine, which means setting it up in a safe mode while your attention is distracted by ATC or other tasks.

In my view, APS and GAMI take a conservative stand with respect to the width of the red box on the rich side. Clearly, theres ample anecdotal evidence that you can follow book values on the rich side of peak and expect to make TBO in many engines. But GAMI believes rich should be well rich.

Still, what impressed me is that its quite easy to get through climb and to cruise and descend without excessive knob twiddling, and still get the benefits of lean-of-peak operation. It can actually be easier than running rich of peak in terms of pilot workload.

Test Cell Visit
In addition to the class demonstration of the remoted test cell, we also visited the test cell control room in small groups. This test cell is unique in that there are 160 data channels capable of recording and displaying on multiple monitors.

We had the chance to see a 350-HP Navajo Chieftain engine running on 100LL, then shift to auto fuel without missing a beat. While power output was reduced on the 87-octane unleaded fuel, the engine ran fine, thanks to GAMIs still-under-development PRISM engine management system.

GAMI hopes to get PRISM FAA certified so it will be possible for any engine to run on unleaded fuel. And to test it, theyve imported a supply of 91/96 unleaded avgas from Sweden which the Lycoming TSIO-540-J2BD Chieftain engine runs nicely on, even at high power.

The test cell operation is of indispensable value for the course as a whole. Seeing the cell and watching the PRISM system run proved a stimulating topic for class analysis. Theres definitely conflicting data and confusion surrounding the topic of engine operation and the test cell can clarify this.

Summing Up
While it doesnt happen often, its always a pleasure to feel you got more than you paid for in an instructional seminar. Thats certainly the case with the APS engine course, which, at $995 for three days, isnt cheap.

If you have GAMIjectors and youre serious about getting the most out of them, this course should be considered a must attend. If your airplane is not turbocharged or turbo-normalized, youll lust for one that is.

Even if you have a carbureted and/or non-turbocharged airplane, you can learn a great deal about how to manage your engine to have a better shot at TBO. Youll see and learn things about aircraft engines that youll find nowhere else. This is clearly a course oriented to serious, high-performance aircraft drivers. And for this group, the seminar is highly recommended.