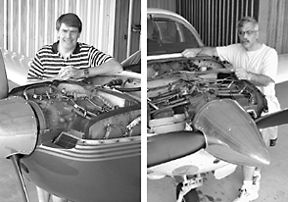 Among all the uncertainties when overhauling an engine, you can count on one thing: A bad case of buyers remorse if you make the wrong choice.

Judging by our reader mail and interviews, a surprising number of owners do make the wrong choice or at least they select a shop or engine source that theyre not entirely pleased with two years later. Even when the engine performs as expected, there are sometimes intangibles that lead the buyer to another shop next time. Its not often, however, that you can compare two of the same engines side-by-side, but provided by two overhaul sources. Yet thats exactly the opportunity we had in the spring of 1996. The 1100-hour Lycoming IO-360 in our Mooney took a dive, with a cracked crankcase at the base of the number 2 cylinder.

Within days of that sad development, contributor Bill Kight phoned to ask for advice. The IO-360 in his Mooney 201 was dumping noticeable metal in the filter and at 1650 hours, his engine was done, too.

Parallel Worlds
Pen and pad in hand, we set off on parallel shopping trips, comparing the merits of various shops with the competitive prices being offered by Lycoming. With a cracked case and third run cylinders, we werent bringing much to the party. But Kights engine had a serviceable case and what appeared to be usable cylinders.

Making the rounds of the shops, Penn Yan quoted $12,444 for an overhaul to factory new fits, including an overhauled alternator, fuel injection, magnetos and starter, along with a new fuel pump. If our cylinders proved workable-that seemed likely-the total damage would be $14,244, with new steel cylinders.

What about that cracked case? If it was repairable, Penn Yan would weld it. Otherwise, the upcharge would be about $2000, for a total just over $16,000.

Mattitucks price was a bit higher but competitive. Furthermore, Mattituck had a built-up engine on the shelf, ready for exchange. We could be back in the air in a week if we wanted it.

Meanwhile, Kight shopped around closer to his home, in Louisville, Kentucky. Blueprint, a well-known shop outside Chicago and geographically near his home, wanted $12,500 to overhaul his run out engine, boring the cylinders (if usable) but installing a new cam.

Blueprint said the upcharge on any crankcase work could be as much as $650. With new cylinders, the job would come to $13,600.At the time, the Penn Yan and Blueprint warranties were essentially the same. One year coverage on parts and accessories but no hour limitation.

The second year covered the engine power section only, pro-rated based on 40 hours per month. Penn Yan, as well as other shops, have lately extended the basic warranty to reflect the service they had actually been providing and as a competitive edge.

Along with calls to other shops, we also checked with Lycoming, comparing a factory remanufactured engine with a factory overhaul. A reman is built to factory new limits, although it wont necessarily have all new parts. It also gets a zero-time logbook and a two-year warranty, versus one year for an overhaul.

The Lycoming factory offers a fly-in overhaul service and at the time, Kight was quoted $17,959, to include R&R, new hoses and motor mounts plus miscellaneous accessories. This assumed a serviceable crankcase. If the crankcase was bad, the upcharge would be $1000.

Our crankcase was junk, the cylinders questionable and cam and crankshaft unknowns. At the time-and presently-Van Bortel Airpower was selling Lycoming remans and overhauls at $300 over factory invoice. Furthermore, Lycoming had an exchange overhaul on the shelf and we could have it for $14,587, plus our core. We could even drive to Williamsport to pick it up, which we elected to do to save time.

As an unexpected bonus, the factory overhaul had a new crankcase and new cam. (All have new cylinders.) This is the luck of the draw but swayed us in favor of the factory engine over saving a few bucks on a local field overhaul and waiting six weeks. The engine was delivered complete, with no missing accessories and at the agreed-upon price.

Kight went with the Blueprint overhaul. Although the shop more or less stuck to its original quote, it missed the delivery date by two weeks, failed to provide the detailed post disassembly autopsy report promised and sent the engine without an ignition harness, which followed a couple of days later. Consequently, Kights engine hadnt had the thorough dyno run Blueprint had promised. Our factory engine was run in a test cell for 1.5 hours and a detailed performance report was provided.

Verdicts In
Following installation, we met Kight in Maryland for a side-by-side fly off. Our factory overhaul was dramatically smoother than the engine it replaced, although we noticed little performance difference otherwise. Kight said he thought the factory engine was marginally smoother than the Blueprint motor, but we couldnt sense a dramatic difference.

Four years later, how do they compare? Our factory overhaul now has 1200 hours and we would describe it as troublefree. Compressions in all cylinders are in the mid 70s and oil consumption hovers around six to 10 hours per quart; normal for an IO-360.

Almost from day one, however, the engine was a leaker. First, it seeped oil from the case split. Torquing down the case bolts helped some. It also seeps oil from some indeterminate sources on the accessory case and beneath the engine, near the induction system.

As noted on page 16 of this issue, one of these leaks was in the prop governor and has since been repaired. However, the engine is oily and none-to-clean compared to other Lycs of this type. In the 1200 hours since the engine overhaul, a vacuum pump has failed, two ignition leads have failed and all three cables-throttle, prop and mixture-have been replaced.

The cables arent related to the overhaul-neither is the pump-but next time, well replace them at overhaul just to avoid the hassle of doing them on an unscheduled basis.

Kight reports that his engine runs fine, although oil consumption is a bit higher than our factory engine, at one quart per five or six hours. He also believes the airplane is a knot or three slower than it was before the Blueprint overhaul and has recorded performance data to back this up. Last time we examined Kights engine, we found it dramatically cleaner of oil than ours and looking almost new.

So, when our engine comes due three years hence, will we automatically go with another factory overhaul? Although we have no complaints about the engine, were not convinced its either the best overhaul or the best value. At the time, we felt the Lycoming warranty-no hours and one year on parts and labor-was on the stingy side compared to what the best field shops were (and are) typically offering.

However, in the interests of minimizing down time, if the same deal were offered on an exchange overhaul, we would probably choose it. On the other hand, if the engine makes TBO with its first-run cylinders and an intact crankcase and cam, were inclined toward a field shop overhaul, by dint of more generous warranty coverage.

Kight says he wouldnt choose a Blueprint overhaul again, although like us, he has been generally satisfied with the engine. Although not showstoppers, he felt the shop should have done better on its delivery promise and waiting for the harness to arrive was an irritant. Next time, hell go with a factory overhaul with its new cylinders and cachet of added value to the airplane.