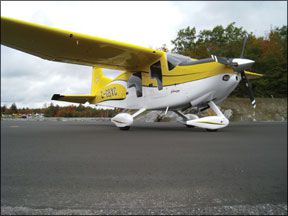 Every aircraft design has an underlying mission its designed to and best suited for. Human owners rarely have so narrow a need, however, so one of the greatest challenge of choosing an aircraft to own is finding a design whose perfect mission falls in the fat part of the bell curve for the range of missions you plan to fly.

Expedition Aircrafts E350 is a backcountry load-hauler first and foremost; its a big

crate with a fat wing and gobs of power. Load it up with the full 100 gallons of fuel and you can still toss in another 800 pounds of payload. That 3800-pound-gross-weight airplane will be off the ground in about 800 feet and climb at 1000 FPM. At 155 knots and 17 GPH, you could take that load a long way into the bush.

While not that many new-aircraft buyers are itching to wring out their investment on gravel strips hundreds of miles from civilization, the ability to haul a good load a long way in comfort and at a reasonable speed has a wider appeal, and thats a niche Expedition is trying for.

Not a Bush Hawk

The biggest change in the E350 from the Bush Hawk it descended from is the switch to tricycle gear. Tundra tires are optional, even with the nosewheel (but without the wheel pants), and all aircraft come with hard points for attaching floats.

The Bush Hawk was unusual in that its cabin was built on a steel cage skinned in non-structural aluminum. The E350 uses the same cage, but its skinned in carbon fiber. This makes the cabin both lighter and larger, because the carbon fiber curves can offset further from the steel frame. The cabin is 51 inches wide at the forward seats and 53 inches wide in back. The frame provides the attach points for the engine, wings and semi-monocoque tail, and is why the E350 can sport four doors. The rear doors are simply huge. Big enough to roll in the obligatory 55-gallon drum. The doors have a solid, car-door feel. (The door latches come from Land Rover, in fact.) Somewhat overzealous gas springs hold them open nearly

180 degrees. While the door and spring attach points are beefy, they noticeably flex when the door swings wide. We wonder if they will loosen after years of abuse.

The wing is cantilevered, so theres no wing spar to get in the way. Checking the fuel will require a ladder, though. The E350 sits high and theres a step for the front seats but no step for the rear. The company is looking at adding one. We think this is needed to keep passengers from stepping on, or tripping over, the rear wheel pants. Anyone whos dealt with a Cessna 206 will appreciate that the rear doors can open even if the flaps are still extended.

The rear seats have a long fore-aft range of motion and easily come out. Three adults across the back seats would be doable, but crowded. Some relief would be had by staggering the seat depth. The area behind the rear seats can still hold 250 pounds of gear. Front seats move back and forth easily, but vertical adjustment is by resetting pins and must be done on the ground. The glareshield is high, so shorter pilots may need that adjustment. All five seats are narrower and more basic than youd find in a new Cessna or Cirrus. They are leather and comfortable, but more utilitarian than luxurious.

The E350s floatplane role is clear with overhead headset jacks, headset holders and the lack of a center console (so the pilot can slide out the passenger side when docking). Both front and the middle rear seats have four-point harnesses. The rear side seats have three-point systems.

What impressed us overall about the interior, however, was the level of finish and smart details. Part cut and fit is excellent. The doors incorporate a fat gap seal to keep wind noise down, as well as a well placed arm rest (and cup holder). In that space between the windscreen and the left of the glareshield where we all stick our charts, the E350 has a chart holder.

Primary controls for the airplane are on a common T-bar. This design hogs panel space and may account for why the glareshield is so high, but whats left is used well with everything within easy reach of the pilot. The E350 puts some switches on an overhead panel and uses a Garmin G500 plus a conventional Garmin radio stack, rather than an expansive G1000 or Avidyne glass cockpit. The company spins this as a more modular way to buy just the avionics you want, but we think its more useful as a space saver. Either way, wed agree its a smart choice for the E350. Flaps and rudder trim are electric only. Pitch trim is electric or via a manual wheel that runs a jackscrew adjusting the leading edge of the horizontal stabilizer.

With no opening windows, we wonder if the cabin will get too hot in the summer. The Wemac vents provide decent air once the prop is turning, but we tested the aircraft on a rather cool day. Taxiing with the doors open might be a bit too breezy.

Inspection panels are ample, including two welcome panels on the cowl. Inspection can be extra critical on a float plane where corrosion is an issue. To that end, we wonder if the jackscrew trim in the tail will be a corrosion issue for float use.

Sprightly for Its Size

The airplane uses the Lycoming IO-580 rated at 315 HP. The coming turbo model of the E350 will use the TIO-540 just like Cessnas turbo 206, but uprated to 320 HP. The nosewheel is free castering, but once the prop is turning and the aircraft is so much as rolling forward, theres enough rudder authority for gentle turns without brakes. Takeoff is with 20 degrees of flaps and requires little rotation once the wing is at flying speed. We were several hundred pounds under gross on our test flight so we climbed just over 1500 FPM.

Handling overall was excellent, but with some interesting quirks. We expected a control feel similar to a Cessna 206-truck-like from a piston-single perspective. Instead, the forces measured out similar to a Cessna 172. The wing is basically a DeHavilland design dating back to the 60s, and with the significant dihedral and washout only at the wingtips. The result is that at low speed the ailerons feel light, yet their effectiveness is excellent and its easy to overcontrol at first. At cruise the ailerons get heavier but are still quite responsive. The net is an aircraft thats more roll sensitive than competing models; its still stable enough for easy IFR.

Pitch was also lighter than we expected, although well harmonized with roll at lower airspeeds. The E350 trims easily and holds its trimmed speeds well. There is a significant pitch change between zero and 10 degrees of flaps requiring some quick retrimming. On the topic of flaps, they are electric, but deploy and retract

quickly. This can be a real plus in a floatplane setup where flaps can be used just to break free of the water.

Adverse yaw is significant enough that other pilots will notice if you turn with your feet on the floor, although passengers might not. Slow flight is predictably stable with both rudder and aileron control excellent right into the stall. In fact, spin testing showed the ailerons were effective even during a spin in most configurations. Power-on stalls have a distinct tendency to break right no matter how coordinated the entry.

The view is excellent in every mode except a power-on climb (where youre looking at nothing but sky). We feel a lower glareshield would change “excellent” to “phenomenal.” The company aircraft has been flown with a rear door off, but thats not yet approved for the certified model.

Cruise speeds in our tests showed 152 knots true at 5000 feet with light weight but a seriously forward CG. Fuel burn was 17.2 GPH. Thats right on the company claims when corrected for altitude. The literature predicts 175 knots for the turbo, but thats at 20,000 feet.

Landing the E350 surprised us similar to the takeoff. We expected to run out of back elevator at low speeds and kept up a bit of power just in case. It wasnt needed. Theres plenty of elevator authority for power-off short-field landings.

Just watch the descent rate when the power goes idle. The wide cabin makes for plenty of drag even without slipping. We didnt win any short landing contests in our testing, but that wasnt the aircrafts fault.

The obvious market contender is the Cessna 206, which is priced comparably. We think the E350 easily bests the 206 on ease of loading and overall performance-especially handling. Comfort is in the eye of the beholder. The E350 is wider, but the 206 comes with more luxurious seats (and there are technically six).

We could see a potential buyer of a 182 buying bigger and going for an E350, especially for the ease of loading. We could even see a buyer attracted to a normally aspirated Cirrus SR22 but willing to trade 20 knots of cruise (and higher fuel burn) for a needed fifth seat, or short-field capability. The coming turbo model of the E350 may shave the speed penalty a bit for those willing to cruise high. Of course, the E350 is set up to make a phenomenal float plane. Another niche, to be sure, but one that we think has no equally capable competitor at this performance and price point, not even from the 206.

The right E350 buyer is also someone drawn to performance more than convention, whos more likely to fly by hand than settle back on autopilot in cruise, and enjoys the bragging rights of flying something thats just a little bit different.