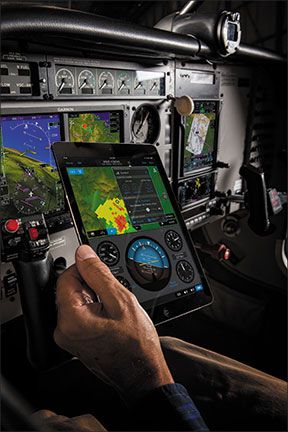 What does Garmin’s new Connext wireless cockpittechnology have to do with its Connected Bike cycling interface? More than you would think. We’ve noticed that Garmin’s recently introduced aviation portable gadgets—from the D2 pilot watch to the VIRB cockpit camera interface—trickle down from its other markets.
In its fitness market, Garmin’s new Connected Bike technology uses a central digital hub to create a completely wireless integration of all sensors that are on the bicycle. While these sensors share little if anything in common with aviation components, the new Flight Stream Connext is part of a new connected concept that echos throughout all five of Garmin’s market segments.

Garmin didn’t pioneer the concept, at least for aviation. It was Aspen Avionics—with its FAA-approved, but feature-limited Connected Panel—that started the trend a couple of years ago.

Flight stream
That’s the name of the remotely mounted Bluetooth transceiver that enables the flow of data to and from the permanently installed sensors in the aircraft. These include the GDL88 ADS-B transceiver and the GDL69 XM weather and entertainment receiver, in addition to panel-mounted radios, including the GTN750 and GTN650 touchscreen navigators and the GNS430W and GNS530W WAAS navigators.

There are two models to choose from. The $549 Flight Stream 110 is the entry-level transceiver that has integral WAAS GPS. Using Bluetooth connectivity, it sends GPS position, FIS-B ADS-B weather and TIS-B ADS-B traffic data received from Garmin’s GDL88 ADS-B receiver to an Apple and compatible Android tablet that run Garmin’s Pilot app.

This interface potentially solves a huge problem because the GDL88, while a one-box ADS-B solution, still requires a cockpit screen to display weather and traffic data. In lesser aircraft (and for lesser budgets) that can’t support a compatible panel display, the Flight Stream device is an economical solution for playing the GDL88 data on a tablet display.

When the Flight Stream 110 is interfaced with the GDL69 XM receiver, satellite broadcast weather data is sent to the Garmin Pilot app—displaying Nexrad graphics in better resolution than it does on a GNS530 or GNS430. When it’s connected with the GDL69A, SiriusXM Satellite Radio can be controlled—including changing channels and volume—directly from the Garmin Pilot app.

The $999 Flight Stream 210 takes the interface to a higher level. Since it has an internal AHRS sensor, it provides attitude data to the Pilot app—a feature that’s already available with the GDL39 3D portable ADS-B receiver. The real utility, however, is recognized with an interface that connects the tablet with Garmin’s panel mounted navigators. That enables flight plan transfer to and from the navigator.

“What we’re trying to do with the Connext interface is create a new freedom in flight plan execution where pilots can flight plan in advance at home and then go out to the airport and push the flight plan into the panel navigators with one button,” said Garmin’s Jessica Koss.

Essentially, pushing the flight plan into the navigator is as simple as turning on the avionics, establishing a Bluetooth connection with the Flight Stream device through a Connext tab in the app and transferring the flight plan that was created in the Pilot app. In a GNS430W/530W interface, that means finally having the ability to load victor airways into the flight plan, rather than entering the associated fixes.

Failsafe, compatibility
Although the Flight Stream 210 has an integral WAAS GPS receiver, it’s designed to always use the best possible position source. That means when it’s connected to a WAAS panel GPS it utilizes the position data from these systems first, using its own source as secondary. While that’s a lot of redundancy, there is a rub: The Flight Stream isn’t an approved ADS-B WAAS position source. That means customers who don’t have an approved panel-mount WAAS navigator will need to buy the GPS-equipped version of the GDL88 ADS-B receiver, which requires an external antenna and a more complex installation. We think a mandate-approved WAAS position source would add more utility, but it doesn’t exist.

The Flight Stream interface has the ability to connect with up to four tablet computers. The benefit? When a GDL69A XM receiver is connected, passengers can control the entertainment stream with their own tablet. In our view, this can get dicey because since there is no “master” tablet, any connected tablet in the cabin has the same level of control.

Garmin says there failsafe built in by design as there can never be a situation where a passenger could load anything the pilot doesn’t want into the navigator. That’s because the pilot has to review and accept the flight plan on the panel navigator before any changes are made to the active flight plan.

Incidentally, this interactive acknowledgment of data flow was a stipulation in Aspen’s Connected Panel certification process. As you might expect, the wirelessly connected concept is enough send an FAA inspector into a convulsive state.

Speaking of FAA certification, the Flight Stream is covered under the Approved Model List (AML) STC of the already certified GTN700/600-series, GNS400W/500W-series, GDL88 and GDL69 systems. This means shops won’t have to deal with field approval as long as the aircraft is on the AML and they follow the STC.
As we go to press, Garmin didn’t have an installation manual for us to evaluate so the exact details of the installation is unknown. We do know that the Flight Stream would have to interface with an unoccupied serial data port when connecting with a panel navigator. That could be challenging in a GNS430W and GNS530W interface that already has occupied serial data connections.

The Flight Stream interface is only compatible with WAAS-enabled GNS units after a no-cost software upgrade. It’s not compatible with the G1000 or the G500/600 retrofit MFD.

It is compatible with later Apple iOS devices and some Android devices, to be announced when the system is launched this August. Garmin says that the Garmin Pilot is the only compatible tablet app, for now.
Contact www.garmin.com, 800-800-1020.