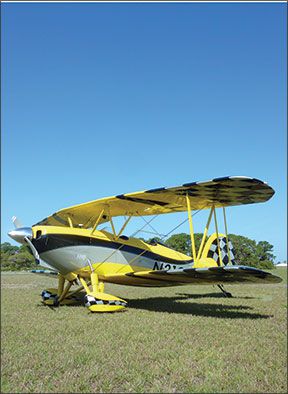 Economists have a name for things that are in daily use despite having been designed multiple decades ago: persistent technology. Biplanes fit the definition, although pilots don’t call them that; they call them fun, an even mix of nostalgia and unique performance characteristics. That more than anything explains why biplanes have been in and out of production since the 1930s and the latest one to go into production is the Great Lakes 2T-1A-2, a modern revision of the classic biplane made famous by barnstormer Tex Rankin.

Waco Classic Aircraft, which builds the hulking Waco YMF-5, is pitching the Great Lakes as the perfect combination of sport aerobat and a trainer for upset recovery, which some pilot courses now require. At $245,250 complete, it’s not cheap, but as new airplanes go, it’s also hardly out of reach for buyers who can afford new and want something that’s more unique than practical, the market niche that Waco plies to sell up to eight YMF-5s a year at a price north of $400,000.

The word “classic” is often applied to anything with two sets of wings, but it’s one that the Great Lakes has fairly earned. Interestingly, from day one, the original 2T was sold as a sport trainer for the discerning pilot who wanted something smaller than the massive Waco and who fancied occasionally tossing the airplane around in aerobatics. It found use as a basic trainer from the early 1930s onward. The original airplane was no slouch structurally, claiming plus 9G and negative 6G capability; the new 2T is built for plus 5.4 and negative 4.0.

In its various vintages, the 2T has had several engines, including the original’s Cirrus, a four-cylinder inline engine, another inline called the Menasco and later a Warner radial. The Lycoming O-360 came along during the 1970s. Well into the 1960s, the Great Lakes was the aircraft of choice for a number of aerobatic champions and airshow pilots, including Betty Skelton and Charlie Hillard. It was eventually displaced by the Pitts, a smaller bipe yet, and later by various monoplanes such as the Extra line.

Compared to the Waco, the Great Lakes was—and is—relatively diminutive, with a wingspan of 26 feet 8 inches and a maximum takeoff weight of 1800 pounds. The YMF-5, by comparison, has a 30-foot wingspan (top wings) and a gross weight of 2950 pounds. It’s also a three-place airplane, with a spacious bench seat in the front hole. Not the Great Lakes, though. It’s a snug fit front and back.

Thanks to its good manners and reasonable acquisition and operating costs, the 2T lived on through the 1960s as a homebuilt. During the 1970s, a few were built in Eastman, Georgia, but right up into the 1990s, the plans-built airplanes were still seeing some action. In 1973, Doug Champlin had the airplane in production briefly in Oklahoma and in 2000, John Duncan bought the type certificate and tooling and announced, once again, a plan to return the 2T to production under the flag of the Great Lakes Aircraft Company. And that’s where Peter Bowers of Waco Classics comes in.

WACO Synergy
Bowers learned of the Great Lakes 2T by chance from one of his Waco customers who had one of the older airplanes. He took a ride in it around San Francisco Bay and was hooked.

“But there were some things I didn’t like about it. The fabric was old and had holes kicked in it through the cockpit sides. The windscreen cut me right in the forehead and the backseat was cramped. The fact that you were sitting in an all-fabric structure…it felt like you were in a glass bowl and you were going to break something,” Bowers says.

Although Duncan had planned to resume production of the airplane, with a production setup already in place in Lansing, Michigan, Bowers made an arrangement with Great Lakes Aircraft Co. to build the 2T in Lansing, improving it considerably in the process.

“We were looking for a new project. We were thinking of maybe a legacy LSA. But I couldn’t figure out how you could possibly make money at selling an LSA. I just couldn’t make it work.Developing a new type was out of the question,” Bowers says.

So Waco Classics took on the project and began improving the airframe. While the 2T retains the same basic planform and dimensions of the original, it looks different enough that people who see it on the ramp might ask, “That’s not a Pitts, is it?” Perhaps the biggest cosmetic change is the cowling and nosebowl, which is tapered and more aerodynamic than the squared- off original cowling, especially models that had the Warner radial.

Bowers says he considered upgrading the engine from the IO-360 to the 200-HP variant or perhaps the 210-HP IO-390, but in addition to the weight hit, the project would have been prohibitively expensive for the small volume the 2T is likely to generate. So the new 2T has a 180-HP AEIO-360-B1G6 with full inverted systems.
In addition to the incremental engine improvement, the airframe also has some upgrades. Before it undertook restarting manufacturing, Waco Classics sent an engineer to study four Great Lakes in regular use by a flight school in Arizona for introductory aerobatics and upset training.

“That gave us a litany of things to fix,” Bowers said. The only significant structural fix was the horizontal stabilizer spar, which showed a propensity to crack. It was replaced by a steel part that’s a bit heavier but also much stronger. The airframe structure is conventional rag and tube, with German- or U.S.-made chromoly 4130 tubing internally treated with linseed oil and coated with an epoxy paint for what Bowers calls a lifetime airframe. The cover is Ceconite with PPG polyurethane paint.

To improve durability around the cockpit, the side skins are metalized and removable for maintenance access. In place of the original heel brakes, the new 2T has toebrakes.

“Owners hate heel brakes,” Bowers told us, “They’re difficult to modulate when you’re operating the rudder.” The airplane has a new Hartzell two-blade metal prop or the option of a three-blade MT. The induction system has also been redesigned to correct a potential safety issue with SCAT tubing that could collapse with age. Chronic high oil temperature in the old airplanes has been addressed with a larger oil cooler and lighting has been upgraded to LEDs all around.

Better Ergos
The cockpit has also been improved, with a slight recline to seat. “Frankly, the original was very uncomfortable. It was built for pilots of the 1930s so it was upright and cramped,” Bowers says.

The marketing brochure advertises 1275 pounds empty, but the first two built were heavier, at 1298 pounds for a useful load of 502 pounds. With full fuel (26.7 gallons in a single tank in the center wing), that leaves room for two standard FAA humans—just. Bowers says the finished airplanes might make the advertised weight with lighter paint jobs, but we’re not sure another 25 pounds would make much difference. Two people and full fuel is about all this airplane needs to do and it remains in the aerobatic category at that weight.

Since we first looked at the 2T three years ago, the panel has been upgraded with new avionics and Waco has added ADS-B capability. Spacious new cockpit or not, there’s not much room in the panel for major avionics. The panel in the demonstrator we flew was dominated by a JPI 930 large-screen engine monitor and had a Garmin aera GPS for navigation. For a combination comm and intercom, the 2T has the miniature TRIG TY91 and an ADS-B Out-capable TRIG TT22 transponder.

Flight Trial
Flying an open-cockpit biplane requires a resetting of expectations. For one, ground and flight visibility is compromised by being hemmed in by two wings and having the forward view blocked during taxi. Still, from the rear hole, visibility in the 2T is quite good because its deck angle is modest compared to other taildraggers and it’s relatively narrow. S-turns on taxi are needed, but just barely.

But the 2T’s slim waist yields a snug cockpit and the only place to store things like charts or an iPad is in a small mailbox-type metal box on the center console. If you don’t have what you need before you get in, there’s no fishing around for it in flight. There’s a small turtle-deck compartment behind the pilot’s head, but it’s not even a baggage compartment in name. If you’re traveling in this machine, it’s a one-person airplane, with baggage strapped in the front seat.

During run-up, Bowers explained—and the POH reiterates—to hold the stick full back and limit the RPM to 2300. Otherwise, you risk a noseover and indeed, during runup, the tail feels light. Moreover, the toebrakes are powerful enough to lock the wheels and cause a noseover during landing or fast taxi. The brakes aren’t touchy, but they won’t tolerate abusive inputs.

With its light weight, the 2T is easy to taxi and accelerates quickly on the runway. The tail comes up with no undue effort and the airplane is ready to fly at 55 or 60 MPH indicated. Best rate is 76 MPH, which will yield about 1200 FPM with two aboard, but better than that solo.

It’s easy to see why the Great Lakes remains such a well-liked aerobat. Its handling seems to hide no surprises and it’s comfortably responsive without having the excessively light stick forces that hamper some LSAs. Roll rate is brisk, but not head snapping. We did notice a sharp left wing drop during a stall series, but Bowers insists this isn’t normal for the airplane. He said his own stall tests didn’t reveal this behavior. A quick stab on the rudder brings the wings easily to level. With all that wing area—187 square feet for a wing loading of 9.6 pounds per square foot—the 2T is happy in slow flight right through the stall burble, retaining some roll control to the bitter end. In cruise, it has little noticeable adverse yaw, but more in slow flight, as to be expected.