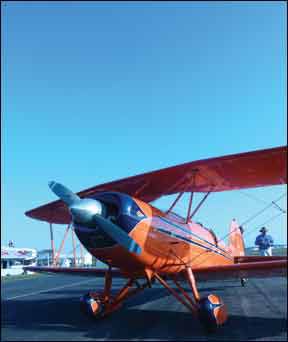 There arent many airplanes that feel precise and balanced in flight without being twitchy and solid without being heavy. The Bonanza 33/35 series qualifies and some say the Cirrus line is close. We recently discovered one that has the middle of this lane nailed down. Improbably, its the Great Lakes classic biplane, which Waco Classic is now reintroducing as a sport aircraft. (Not light sport, but certified, mind you.)

Just as improbably, it filled up its order book with at least a years backlog at the Sun n Fun show in April and the year is barely a quarter old. What the heck is the appeal of a 80-year-old open cockpit throwback to the Depression era? If you have to ask, you cant possibly understand, but well try to explain it.

The Great Lakes was first developed in the late 1920s as a trainer and personal fun airplane. Market timing was right because the post- World War I flying boom was sustained by the Curtis JN-4, which was difficult to handle and getting long in the tooth servicewise.

Great Lakes enjoyed a flood of initial orders, but before the factory could fill them, the onset of the Great Depression in 1929 gutted the market. The factory survived in reduced circumstances, but only 264 of the original Model 2T were built.

Although designed for a Warner radial, it never had that engine line but the American Cirrus Ace engine instead. Great Lakes production survived on and off long enough to see the airplane get a Lycoming O-320 and an AEIO-360 with the last of the original-albeit much improved-line. Waco is certifying a new engine .for the airplane, the 210-HP IO-390 and AEIO-390.

Waco Classic, which builds various versions of the big-brute Waco YMF-5D at its Battle Creek, Michigan, factory, will put the Lakes into production later this year, on customer-order basis. Two models will be offered, the $219,000 Touring model with a 180-HP Lycoming IO-360 and the Sport model at $239,000 powered by a Lycoming AEIO-360, also at 180 HP. (Both are aerobatic.) Waco says it will certify a new engine for the Lakes, the 210-HP IO- and AEIO-360.

Who are the buyers? Peter Bowers of Waco Classic told us these are owners who want a docile, medium-performance aerobatic airplane without setting their hair on fire in a Pitts or an Extra. Some of them may be buyers who would consider a Decathlon, but realize for not much more money, they can live the dream of 1930s Golden Age flying.

Part of the appeal of the Lakes is its size. Think of it as a three-quarter scale version of the Waco. Its 20 feet 4 inches long, with a wingspan of only 26 feet 8 inches, but a wing area of 187 square feet, making the wing loading about 9.6 pounds per square foot. With the 180-HP Lycoming, power loading is exactly .1 HP/lb. This results in a respectable, if not spectacular, climb rate and cruise speeds in the 120 MPH range, or about what the typical LSA does. Stall speed is a lazy 59 MPH.

We flew Lakes expert John Duncan who told us the airplane we trialed had an empty weight of about 1000 pounds on a max gross of 1800 pounds. It carries 26 gallons of fuel in top-wing tanks, so practical endurance is three hours, making a 300-mile trip easily doable.

Waco Classic plans to adhere to the original construction, but with some significant changes. It will get some structural attention to handle the IO-390 and instead of the airplanes original Doug Fir spar, the new models will have an aluminum spar build-up. That will move the gross weight up to 1900 pounds. In addition, instead of the original heel brakes, the new models will get modern toe brakes. That will be a mixed blessing for those not accustomed to light braking in a taildragger, for modern brakes have more than enough grip to put an airplane like this on its nose.

The Lakes emerged from the industry just after Lindbergh flew the Atlantic so, in a sense, its a “Gen II” biplane, with more use of riveted aluminum on various structures and a newer oleo strut landing gear that, as John Duncan told us, “makes a mediocre pilot look good.”

One thing Waco cant modernize is egress into the front hole. Its smallish and the top wing traverses the center of its diameter. It requires an awkward, backward swing to get in the first time. The second time, we suspect muscle memory will make you look less spastic. The harnesses are Hooker four-points, but need to be tighter because the front cockpit combing is barely six inches away from your nose. That could hurt in a roll over. Bowers said this will be addressed.

Visibility over the nose from the front is decent, although shallow S-turns are required. You really sit deep in the fuselage, so wind protection with the stub windshield is good, albeit with a deafening noise level that will require a good high-noise intercom and mics to overcome. Bowers told us a higher windshield is planned, but were not sure it needs it. With the engine heat, the front cockpit was quite comfortable on a cool, humid morning.

Takeoff is standard taildragger stuff. The tail comes up with a moderate push and then the Great Lakes handling qualities immediately reveal themselves. It has glass-like smoothness in response to all control inputs and because theres no evidence of twitchiness, the forces feel very linear. The roll rate is not Pitts quick and it comes with moderate force, but the entire airplane feels like its on a ball-bearing mounted longitudal shaft. Like most older designs, it has some adverse yaw, but it only takes touches of rudder to correct this.

The power control is similarly precise, with a lot of travel required to make power changes. “Jerky” just isnt in the Lakes vocabulary. The trim mechanism is similar to a Piper Cub in principle, but different in execution. A jackscrew adjusts the leading edge of the horizontal stabilizer to trim off pitch forces, but rather than a crank, you just grab a tightly strung chord threaded through a steel sleeve in each cockpit. Move it forward for nose down, aft for nose up. Effective, simple and intuitive; we liked it better than the Cubs crank.

But the landing was the real eye opener. Were quite tailwheel current, thanks, yet when we fly tailwheel LSAs for trials, we expect to be a little humbled on the first try or two. All tailwheel airplanes have their minor quirks.

Not so much in the Great Lakes. Thanks to those bump-eating oleos, our first wheelie attempt was a greaser. John Duncan said that three-pointers are similarly easy to achieve if you just hold the attitude. “It doesnt matter if you start that from a few inches or a few feet, it will just settle in,” he told us. That said, the Lakes is still a taildragger and it will bite and head for the ditch if you let it. So like any other tailwheel airplane, staying ahead of it on the rudders is a must.

Considering its size, power and wing loading and superb handling, the Lakes strikes us as one of those near-perfect compromise airplanes that no one knows about. But as the sport aviation industry matures, that just may be about to change, if Waco Classic has anything to say about it.