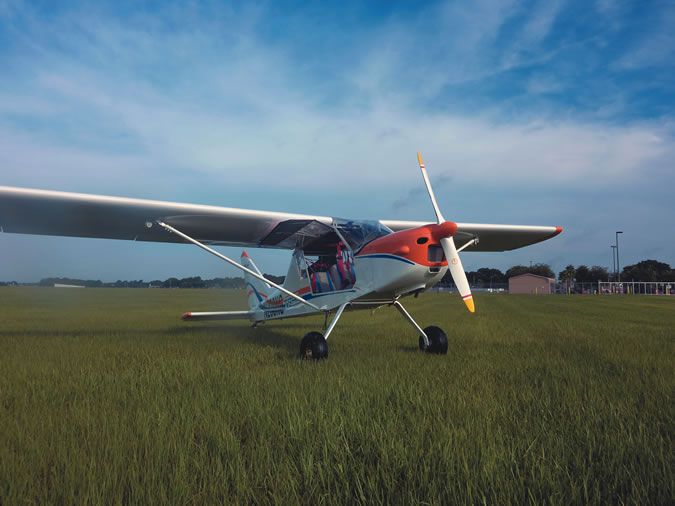 Somewhere between conception and execution of the light sport aircraft idea, the notion of simple and inexpensive got tossed overboard. Typical LSAs are lavishly equipped at prices in the $130,000 range. Yet at least a couple of companies persist with offerings below that price, including the Italian-built Groppo Trail, which surfaced again this year at AirVenture.

It’s not entirely new to the U.S., having appeared sotto voce last year, but with no marketing push. Now the model has been picked up by Steve Bensinger’s Lone Palm Aero for another run at the U.S. market, offering an experimental amateur-built version and ELSA and SLSA models.

With a background in European microlight manufacture dating to 1982, Groppo appears to be applying that kind of technology to the Trail, which will sell in a U.S.-equivalent LSA version for $79,900 with steam gauges and $82,900 with a minimal glass panel from MGL, a South African company. Options like floats and tri-gear may drive that base up, but it starts well under the $100,000 mark.

No Frills
How do they do that, when everyone else is selling LSAs for $30,000 to $50,000 more? In our view, there’s no mystery to this. The Trail is simply a minimalist airplane. While it has some intriguing features, Groppo and Bensinger have resisted the urge to tart the Trail up with more elaborate features than it needs to fulfill its basic purpose as a day VFR fun flyer meant to be, if not cheap, affordable.

First impression of the airplane is that its design brief is built on the Cub idea, although it’s not exactly a Cub clone. It’s a tandem two-seater with conventional strutted wings and simple, lightweight construction.
The cabin is a welded cage of 4130 square-section chromoly tubing which, à la Mooney, provides some crashworthiness. Aft of the cabin section, the airframe is conventional stressed-skin riveted aluminum construction over ribs. We noticed that many of those rivets are pop rivets,  which simplifies construction.
The wings are conventional aluminum skin over ribs, with fuel stored in molded nylon tanks in the wing roots. Capacity for U.S. models will be 26 gallons between the two sides, almost doubling the 15 gallons Euro versions carry, since these airplanes typically aren’t used for distance flying in Europe. Also to the European design mode, the wings fold, the idea being that this enhances affordability, saving the thrifty owner the expense of a tiedown or even a shared hangar. Europeans have many more affordable garages than they do hangars on airports. Trailering is more common there than in the U.S. and Bensinger isn’t sure how North American owners will adapt to it.

“We’re leaving it up to the buyer at this point. Because the tail doesn’t fold yet, it’s still a bit tricky to trailer,” Bensinger said. Groppo is working on a folding tail design which, if it works as intended, will reduce the width of the folded airplane to the width of the gear—5 ft. 7 in. That will easily fit into one bay of a two-car garage.
“Once we come up with a good tail fold system, we’ll probably come up with a trailer that can be sold with it. It’s still very doable to take it back and forth and stick it in your garage at home, “ Bensinger told us. |

Quick Fold
He demonstrated the wing-fold process, which takes one person about five minutes, with no tools required. The aileron push-tubes disconnect and there’s a threaded pin to fasten each wing into the spar carry through. Fuel lines remain attached. The wings rotate to the vertical (chordwise) and pivot toward the back, where a fixture secures them for towing.

Those fixtures will likely be options for the Trail, as will floats, a full control set for the rear seat, a belly pod luggage compartment and the parts to convert to tri-gear, which requires a few hours of work. There’s no accounting for taste, but in our view, the airplane would be considerably less appealing as a tri-gear airplane. It just looks right as a taildragger and why not leave it at that? There’s also a tow hook add-on for glider tugging, another Euro-inspired option.

Panelwise, the Trail is likely to remain austere to meet its sub-$100,000 price point. As currently priced with steam gauges, it has just a single MGL V6 radio/intercom and a Sandia STX-165 transponder. For $3000 more or $82,900, you get the MGL Avionics Xtreme EMS EFIS and engine monitor pair, plus an iPad mini with ForeFlight for navigation.

The panel space may be tight, but the weight isn’t. The Trail version we flew had a claimed empty weight of 720 pounds, which is light by LSA standards, yielding a useful load of 580 pounds. (The Trail gross-weight limit is 1300 pounds, not the LSA standard of 1320 pounds.)

That’s two 200-pounders, full fuel and an overnight bag. Not that there’s really space to carry much. There’s a Cub-style breadbox behind the rear seat. Considering the Trail’s generous useful load, the belly pod idea makes sense. That could turn it into a respectable outback airplane to rival the Kitfox. We won’t be surprised if EAB builders opt for the turbocharged 914 Rotax just for that reason, should it become an option.

Ergonomics, Flight trial
As a tandem, the Trail’s cabin area isn’t exactly commodious, but it’s certainly wider and more comfortable than a J-3 Cub. Soloing is from the front seat, but to enter the rear, the front seat pivots forward. That’s helpful, but the door opening has an angled corner member that squats right in the middle of the ingress path. Bensinger says that will be eliminated in future models and that’s a good idea.

The Trail will have a full swiveling Matco tailwheel and Matco toebrakes—they’re optional for the rear seat—so ground handling is sure footed and precise, just as all modern LSA taildraggers seem to be. With a big rudder and strongish brakes, even a club-footed pilot will have margin against losing it in a groundloop.

Bounces, however, are another matter. We wouldn’t expect an airplane in this price class to be oleo-equipped and the Trail isn’t—just spring-aluminum legs bolted to the fuselage externally. There’s no traditional box structure for the gear. Any spring gear will give as good as it gets, so a wheelie with a too-high descent rate will yield a nice bounce. Timing is everything. So is airspeed.

In flying the airplane, Bensinger had suggested a speed of 70 MPH indicated on long final, but we didn’t sense that the airplane was comfortable there. It seemed to naturally settle into about 60 MPH  and 55 over the threshold yielded a nice, bounce-free three pointer. Wheelies will take practice, but that’s true of any taildragger, perhaps with the exception of the Great Lakes biplane we reviewed in the September 2014 issue. It has oleos with sufficient stroke to soak up the most embarrassing touchdowns.

The Trail version we flew had a two-blade wood prop that Bensinger described as over-pitched for the airplane. Perhaps so, but with two aboard, the Trail still managed a respectable climb and got itself to a 1000-foot pattern altitude by the mid downwind. For takeoff, the tail comes up easily and the airplane flies when it’s ready, without the need to tug it off the runway. Again, this is typical LSA performance. But then we’ve come to expect this from airplanes that are all about the same size, have similar wing sections and not only the same power, but the same engine, the 100-HP Rotax 912 ULS.

One thing Groppo may have paid more attention to is control forces and harmony. In some LSAs we’ve flown, the stick has zero breakout feel and light, almost dangerously so, control forces, especially in pitch. Groppo seems to have positioned the control pivot points to give the airplane a just-right, slightly heavier feel in roll and pitch.

It feels like a larger airplane and we think that’s a good thing. Too-light control forces invite over control, uncommanded excursions and PIOs on landing and takeoff. The Czech Sport Cruiser is notorious for this, in our estimation. Cruise speed? No surprise, just like every other airplane with the same power: about 100 MPH on 4.5 to 5 GPH. This will vary up or down by as the company sorts through the prop choices available for the engine.

And speaking of engines, there may be choices there, too. In Europe, the Trail is flown with the 80-HP Rotax 912 UL, but there’s also a Jabiru 2200 and Sauer option. U.S. models will likely get the 912 ULS and eventually the new 912 iS. “It’s just a matter of putting it on the airplane and running it through the ASTM process. I don’t see why not,” Bensinger explained.

What we would most like to see is the 912 iS Sport engine. With its improved induction, it offers more mid-range torque for shorter takeoffs and climbs. The Trail is no slouch with its cruise prop, but it’s always better to have more climb rate than less and to use less runway rather than more.

Conclusions
The Trail is, in the end, another contender among many. Its performance is respectable if not exceptional, but then that sentence can be attached to any of a dozen other similar light sport aircraft. It’s very much in the Cub tradition and, in our view, is best left as a taildragger and flown like the Cub it mimics. Why fuss with the aesthetics?

The Trail’s strong point is price and value. If it hews to that $82,000 price point, it will invoice as much as $30,000 or more under other Cub clone offerings, which makes it a lot of airplane for the money. Having said that, the LSA market seems to have defied expectations that droves of buyers would respond to simple, low-cost airframes. What they seem to want are simple airplanes festooned with every glass gadget available. We’ll see if Groppo can carve out a niche of buyers who really do want what the LSA concept originally promised.