Let’s go to the dark side. You sell the family Bonanza for a used Lancair, and within the first year of ownership get it into some ice, lose control and join the NTSB reports as a double fatal. The wreck shocked and rattled our airport community a number of years ago, and you can bet it—and others like it—got the attention of the deceased pilot’s insurer.

As we’ve been reporting (and as readers confirm) the insurance industry is playing hardball with the policies for older pilots who fly complex airplanes—no matter the experience level and claim history. Some are facing non-renewals, if not eye-watering rates. 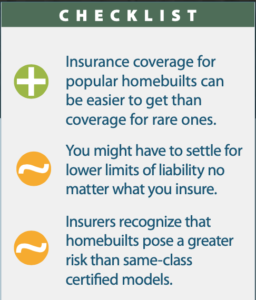 Maybe it’s finally time to part with the pressurized twin and buy a speedy homebuilt to satisfy the flying bug for the golden years. Hold it right there. It may not be your ticket to easy insurance. Or is it? We did some research.

Among GA pilots (and among some who would like to become pilots) there is a growing movement toward experimental amateur-built aircraft. Some are simply drawn by the performance. It’s easy to get used to Mooney 201 speeds with the simplicity of fixed gear and a Skyhawk engine. For others, it’s the challenge of building their own aircraft, with the freedom to equip and modify it as they wish without the stinging price tag of FAA-certified components.

Then there are the experimental speedsters that offer performance that no other in the certified class will provide. This includes the Lancair IV-P and Evolution turboprop, to name just two. Truth is over the last 50 years, plan-built projects gave way to quick-build kit projects, which keep getting better.

Building your own airplane is still a formidable enterprise, but now there are plenty of owners groups and local EAA (Experimental Aircraft Association) chapters to lean on. Many airplanes are available with the so-called fast-build option, which allows the builder to hire professional help to complete certain parts of the kit, while still remaining within the required 51 percent of the construction that the builder is required to complete.

Saying all of that, kit-built aircraft present insurers with some unique challenges. Factory-built, Part 23 airplanes, at least right after they come off the line, are all pretty much the same. There are equipment options, but the airframe and most of the systems are the same for a given model. And one of the mainstays of insurance is the grouping together of homogeneous units. Given a substantial number of essentially the same aircraft, insurers can predict their loss cost. At the end of the year, they can look at their claims and adjust rates accordingly.

On the other hand, the different types of kit-built aircraft seem to blossom in endless profusion.  According to a recently revised FAA list of kits that are available, there are more than 200 offerings, depending on how you count. A large part of the kit-built fleet is made up of two dozen types of aircraft, but insurers are still faced with many more types of kit-built aircraft than factory-built aircraft. Take your pick: Vans, Rans, Lancairs, Glasairs, Glastars, Sonex, Kitfox, Cozies, Pietenpols, Velocities, Vari-Ezes. There are literally hundreds of types to choose from, including airplanes, helicopters, gliders and gyroplanes.

By contrast, amateur-built aircraft proudly carry the name of the individual who built them, and he or she likely doesn’t have tens of millions of dollars to defend a product liability suit. The insurance company may not be able to count on the airframe manufacturer’s insurance to share the burden.

Physical damage claims may also be slightly more involved for homebuilts. Some obscure types or types whose builder may have gone broke are difficult to get parts for.  Total losses are straightforward, but partial loss claims may require more work for the adjuster and the owner. Many maintenance shops are hesitant to work on a type of aircraft they are unfamiliar with, and where there is no product liability backstop, as there would be in the case of a certified craft. In the case of a partial loss, the owner may want to make his own repairs. Together, the insurer and insured come up with a value for the airplane as it sits, and work out an hourly rate for the owner’s labor.

Liability claims against the aircraft owner are also straight-up propositions. The aircraft owner is probably the manufacturer—if he built it—and maintains and flies it. Since almost all amateur-built aircraft policies are written with per-passenger or even per-person sub- limits of $100,000 per passenger (in some cases $200,000), the insurers pay these limits fairly promptly, both to fulfill their contractual obligation to their client and in order to avoid bad faith claims charges.   Although the owner may benefit from the insurer paying for the cost of defense, this too will probably end once the company has offered to pay its limit of liability. This is not unique to kit-built aircraft, but owners of certified aircraft often have the opportunity to buy out the per-person or per-passenger limits and purchase what insurance people refer to as “smooth” coverage.

Smooth limits allow the insurer to pay liability claims for bodily injury and property damage in whatever amounts are needed until the limit has been exhausted. This is more likely to be sufficient to take care of injured passengers, and the insured also benefits from having the costs of defense for a longer time, perhaps all the way to settlement. If the insurance company has more at stake, they are more likely to mount a defense than if they only had $100,000 or $200,000 at stake. During our research and in talking with underwriters, we came away with the impression that “smooth” coverage was rather difficult for kit-built aircraft.

Among people we spoke with about the world of experimental amateur-built aircraft, there was almost universal agreement that these aircraft suffered a higher rate of accidents than their certified brethren. Just how much higher is very much a matter of debate. It’s not that there are not any statistics, it is more that the statistics are measuring different things. The FAA only looks at fatal accidents when it looks at homebuilt aircraft. Insurers and those within the homebuilt community who keep track of these things look hard to find all the accidents. And there is nearly universal agreement that homebuilt accident rates in general are higher than those for certified aircraft, but are continuing a long downward trend.

And kit-built aircraft have one area of risk that certified aircraft do not, which makes someone (usually the builder) a test pilot in every sense of the term. That’s because prior to being issued its airworthiness certificate or carrying passengers, the FAA requires that the airplane be test flown for between 25 and 40 hours. The stats show that 13 percent of all kit-built accidents happen during this fly-off period, and most of them happen during the first 10 hours.

We took the most competitive quotes in each category, so they did not all come from the same insurer. We also showed the number of quotes that we received for each airplane, and the highest limit of liability that we could get for each airplane. Apart from price, the availability of insurance, expressed as the number of successful quotes, and limit of liability are key measures of how likely you can successfully buy insurance for each type. Note that we made our sample pilots very qualified in order to encourage successful outcomes.  The numbers in the chart should be viewed as indices, rather than as insurance quotes. The bottom line is that they are more predictors of whether or not you can find insurance than precise measures of what the insurance will cost.

While some of the numbers there are surprising, some are not. It is still easier to find a variety of insurance offerings for a certified airplane than a kit-built one, and you can more often get a higher limit of liability for a certified airplane than  an experimental. For the most part, the highest limit of liability that is available in the market for kit-built aircraft is $1 million combined single limit, subject to a maximum of $200,000 per passenger or per person. Many will limit bodily injury coverage to $100,000, depending on the pilot’s experience or the type of aircraft. 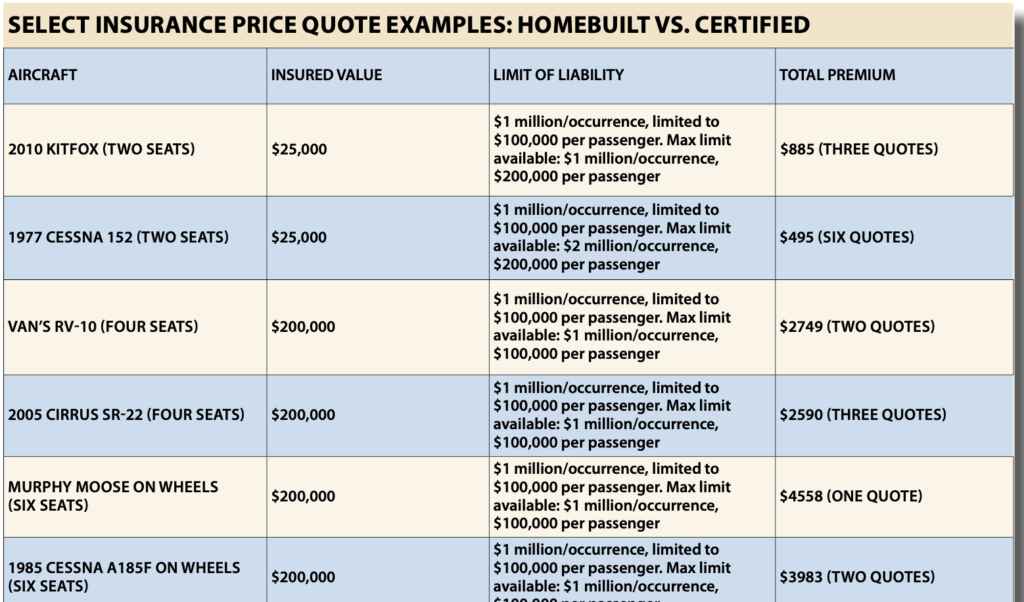 THINK IT THROUGH, FIRST

Here are some things to think about if you are seriously considering getting involved with kit-built aircraft.

• Does the aircraft that you are considering have a substantial owners group that can offer reliable guidance on a wide variety of issues?

• Will you be able to easily obtain parts for the aircraft once it’s built? This includes major structural components that might be required after a wreck.

• Can you get along with a sublimit of $100,000 per person to $200,000 per person on your insurance policy, for bodily injury and property damage? In the current fraught insurance market, make sure you can obtain the limit that you feel you need.

• Don’t wait until you have an aircraft to purchase aircraft insurance. Insurers like long relationships with their clients. You may have to reserve a registration number, but your insurance company or broker can give you valuable advice along the way.

Remember that each kit portion that you have purchased has value, and by the time you are well into the project and have an engine or avionics, that value is considerable.

• Make a plan for the first flight. If you don’t, your insurance company may do it for you. Are you already a certificated pilot? Do you have experience in the type you are building? The answer to that is frequently no. In order to make the first flight and test flight period safer, the EAA, the FAA and the manufacturers have provided resources for builders like the EAA Technical Counselor and Flight Advisor programs.

If you don’t have any experience in the type of aircraft you are building, does it make more sense to hire a professional for the first flight, or to do it yourself? Again, if you ask the question before you ask your insurance company, it will let them know that you have considered the issues. Preparedness and realism go a long way. The truth is, before getting knee-deep in a kit project (or before buying an existing one), have a real conversation with your insurance provider. They will appreciate being included, and can probably give you good advice that will save you a lot of grief later on.

Jon Doolittle is a regular Aviation Consumer contributor and a principal at Sutton James Aircraft Insurance in Hartford, Connecticut.