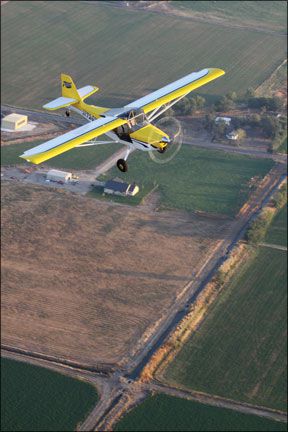 Were running out of ways to explain why what was supposed to be the shining salvation of aviation-the light sport aircraft industry-has thus far failed to deliver a three-run homer. Would-be buyers continue to complain that no one has produced a decent $40,000 LSA, but someone has produced a good one for a little more than twice that: The Kitfox.

As a kit company, Kitfox has been around since the early 1980s in various

iterations and its basic design idea has evolved through a number of variants and one European knockoff.

And the big idea? A conventional welded-tube structure covered with fabric and with expansive clear plastic doors, a glass roof and a huge baggage compartment. As if there werent a long enough list of signature features, the design is unique for its use of full-span flaperons in place of conventional ailerons. On the experimental side, the formula has proven successful enough to have put about 5000 kits into the field.

Last year, with little fanfare, Kitfox announced an LSA version of the airplane, available as either a taildragger or as a tricycle gear airplane. If you cant decide which you prefer, Kitfox owner John McBean says the designs can be swapped back and forth without undue effort, although its not something an owner would be likely to do on a whim. (It takes a half day or so.)

McBeans idea was to produce a U.S-made LSA at a price point around $100,000, thus the base price for the Kitfox LSA is $83,500, equipped with just a radio and a portable GPS. But these days, nothing is shipped in minimal mode so typically, the Kitfox will invoice at about $100,000, equipped with a Dynon Skyview EFIS, a Garmin SL40 navcomm and a transponder. For basic LSA training and flying, we consider this lavishly equipped.

Engine choice for now is the popular 100-HP Rotax 912, but McBean says the company is looking at Lycomings new IO-233. The problem will be weight. At 170 pounds installed, the Rotax brings the Kitfox LSA in under 800 pounds,

making it one of the lighter products on the market.To hit the price point, the Kitfox is constructed like an experimental aircraft because it essentially is. Although it meets the 1320-pound LSA weight requirement, the Kitfox has essentially the same structure as the well-regarded kit aircraft. Extensive use of fabric helps keep the weight down, as do the clear plastic doors and skylight. There are some minor differences, such as carb heat for the Rotax, which is not used in the experimental version.

Although its available in both taildragger and trike versions, we flew only the taildragger, since we tilt toward conventional gear for this class of airplane. Theres not much difference in performance between the two, although the handling is quite different.

Getting into the Kitfox is the usual butt-first-drag-the-legs-over-the-stick suppository type insertion. The inflexible and overweight will struggle a bit, but we find this to be true of all LSAs to some degree. The Kitfoxs gear legs are further forward than they are on a Cub, but the doors are wider so its an even trade. Once inside, the contoured seats are comfortable. They dont slide for adjustment, but the rudder pedals do, using a lever mounted on the center cockpit tunnel, far forward. But do remember to adjust the pedals before securing your seatbelt, otherwise you cant reach the rudder lever.

Everything is about where you expect it to be in the airplane. The engine controls are mounted center console low, with all the electrics on small rocker switches on the pilots side. With the Dynon Skyview on the left, the right side of the panel is wide open for another EFIS, map or GPS.

Trim is electric only, on the center console, and the motor is quick moving. All it takes is a stab to trim off control pressure. We would prefer a coolie hat trim on the stick, but the center console location works fine and simplifies wiring. The flaps-well, flaperons-are located on a lever between the two seats and are easily reachable. The Kitfox is somewhat unique among LSAs in having push-pull tubes rather than cables for the ailerons and elevator and this is quite noticeable in precision of movement. The rudder has conventional cables.

Rather than a moving trim surface, the Kitfox trim system changes the angle of attack of the horizontal stabilizer through a jackscrew arrangement, rather like the Mooney M20 series.

The Kitfox has 6.00 X 6 tires rather than the 5.00 X 5 used on most LSAs, better to suit its intended function as a backcountry flier. Ground handling is conventional, although we found that straightening the airplane out after a brake-assisted turn is a practiced art. Demonstration pilot Paul Leadabrand says leading the ground turn cures that, but we never mastered it. Visibility over the center of the nose is blocked, but you can peek around the side of the glareshield to get a good view forward, so aggressive S-turns are an option, not a requirement.

If there was any surprise in flying the Kitfox, it was on takeoff. With the gear mounted forward, the airplane is quite heavy on the tail-you cant easily lift it off the ground as you can a Cub or a Champ, if you can lift it at all. This means that on the takeoff roll, it takes considerable forward stick to lift the tail and hold it up. If youre prepared for that, its okay. But the surprise came when we picked up enough speed for the flaperons to bite-and thats not very fast.

They have so much roll moment that its possible to lift a wing during the takeoff roll and we did, imparting an unintended turn. In fact, we noticed that even experienced Kitfox pilots tend to walk the wheels a little because lacking any noticeable dead neutral, the slightest stick movement imparts rolling moment.

However, in climb and cruise flight, this is less noticeable, but the airplane wants a delicate, two-finger touch on the stick. It rolls quickly and easily. Pitch forces arent as light as we expected, certainly not quite as feathery as Cessnas Skycatcher or the Piper Sport. Little in the way of right rudder is required for climb, merely resting a foot on the pedal is sufficient.

With only a degree of dihedral, the airplane is close to neutrally stable in roll and will diverge slowly if displaced from level. Pitch is another story; if displaced, the Kitfox aggressively seeks the trimmed airspeed, damping phugoids in two cycles. Stalls are nothing to speak about; the usual burbling with no fall off and, if held in the stall aggressively, the Kitfox falls into the parachute mode most LSAs seem to have.

Climb and cruise performance are excellent. We found that Kitfox happily bolted up to pattern altitude by the turn to downwind and cruised at about 120 knots indicated at around 5000 RPM indicated for the Rotax 912. Fuel consumption is typically 4 to 5 gallons with a 27-gallon capacity. Baggage capacity is a generous 150 pounds in a large area behind the seats, so the Kitfox can live it up its reputation for a backwoods airborne camper.

For as tricky as it was to learn the takeoff, landing the Kitfox is easier than with other taildraggers weve flown. We surmise there are several reasons for this. One, the gear legs are stiff enough not to impart much bounce, so when you stick the airplane on, it seems to stay stuck.

Second, and unlike older taildraggers, the Kitfox is not very draggy and will float if you approach fast; it wont give up flying all at once, so you can finesse the speed as you feel for the runway. Last, there are simply no sight picture issues in this airplane. Everywhere you look, you get good visual cues and with side-by-side seating, both pilots see more or less the same thing.

In one category, the Kitfox blows away everything: cockpit visibility. With a large windshield, two clear doors and a giant skylight that extends back over the baggage compartment, this thing is like flying in a fishbowl. But alas, fishbowls heat up so in a Florida summer, bring a hat and suntan lotion. Thankfully, the airplane has good ventilation through panel-mounted eyeball vents and you can also fly with the doors open. Gas shocks hold the doors open.

As LSAs go, the Kitfox holds its own in terms of overall performance, comfort and practicality. At about $100,000, its higher on the value line than many other LSAs weve flown. With the welded steel structure and quality fabric work, the workmanship on the airplane is excellent. You wont find any paint goobers or sloppy welds.

As for the flaperons, were neutral. We like the idea well enough, but we would be just as happy with conventional ailerons that would be less alive during the takeoff roll. On the other hand, if you plan to do a lot of backcountry flying-as many Kitfox owners do-the flaperons offer an extra measure of slow speed roll control for a pilot whos accustomed to them.

Which version to pick, taildragger or trike? Were strongly biased toward the taildragger because we think its better looking and because LSA flying is more about the fun and the challenge of pure airmanship and less about transportation. For our money, theres no better way to do that than in a taildragger.