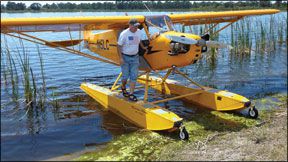 If you park a Cub on a ramp, youll soon draw a crowd. If the Cub is on floats, youll need crowd control and that, in a nutshell, describes what may be American Legends best marketing ploy.

By dint of sheer size, it drew a constant stream of attention-the airplane towers over the typical diminutive LSA and its one of only a small number of LSAs being sold as purpose-built amphibians. (We covered two others, the Searey and the Seamax in the August 2009 issue, both flying boats.)

While we initially thought the Legend amphib was a conversion kit available for any existing Legend, it turns out not to be. Thats not to say a Legend couldnt be fitted with floats, but the airplane we flew is a purpose-made amphib and owner Dick Parsons told us he doesnt have land gear for the airplane. (Thats an option.)

The challenge for LSAs on floats is weight. The LSA max gross for float-equipped airplanes is stretched from 1320 pounds for land planes to 1430 pounds for aircraft intended for water operation. Thats only a 110-pound delta, so obviously the float system has to be light. And so does the airplane itself.

When floats are fitted, theres an exchange weight between removing the land wheels and installing the floats, but the 1430-pound limit doesnt leave much headroom. The reality is that LSA floatplanes are likely to be flown a bit overweight, which is common practice for most light floatplanes.

For Parsons amphib, the empty weight is around 840 pounds with land gear. Remove that and add the 235-pound float rig and the total empty weight is just under the 1000-pound empty weight limit, at 998 pounds. That leaves 432 pounds of useful load and capacity for two not-too-heavy people and enough gas for a short flight. Or one person and enough fishing and camping gear for a couple of weeks.

There only a handful of companies making floats for LSAs and a couple of these companies told us they havent installed any yet. For its amphib project, Legend worked with Baumann Floats of New Richmond, Wisconsin, to develop the BF 1500 install for the Legend. These floats are also approved for the J-3 Cub, PA-11 and Taylorcraft, plus the FK-9 LSA.

Apart from being exceptionally light, the 1500 floats are typical of amphib hardware. Theyre nicely made of 6061-T6 aluminum riveted together with caulked seams for water-tightness. Each float has eight watertight compartments, each fitted with a removable cap so they can be pumped dry of any water. The float bottoms are fluted which, according to Baumann, ride smoother in the water and reduce weight by eliminating the need for cross bracing.

The main wheels hide inside the center of the floats while the front wheels are mounted on the stems. The gear itself is controlled by a Johnson bar lever to the pilots left, and there are wire flag gear indicators on the top of each float confirming gear position. You can also see the nose gear position over the top of the float. The floats have retractable water rudders, which are handy for beaching.

Many float plane owners revert to land gear when the lakes freeze and to do that in the Legend, it can be lifted from the top by attaching to the wing center section, a beefy latticework of welded steel tube thats typical of the airplanes entire construction. Parsons told us the conversion takes a couple of hours, and involves removing a half dozen bolts and re-rigging the gear and water rudder cabling.

The well-established trend in LSAs is premium panels with EFIS systems rivaling the capability of certified gear like the Garmin G1000. But because of weight restrictions, the amphib Legend doesnt qualify. Legends Darin Hart told us that

keeping the airframe on the diet was necessary to make the empty weight limit, so Dynon Skyview or other new age electronics arent options. But then why do you need that stuff to fly VFR into a backcountry lake?

Parsons Legend is typically equipped with a Garmin GPSmap 496 (the 696 is an option), an SL40 comm and a GTX327 transponder. The panel is otherwise quite spare, with not even an attitude indicator, but an airspeed indicator, altimeter and tachometer.

Although the land version is available with the 100-HP Continental O-200 in either open or closed cowl configuration or the Jabiru 3300A at 120 HP, the amphib gets only the O-200D, again for weight considerations. It has a three-pitch, ground-adjustable prop.

For a light sport with only 100 HP and at its weight limits, the Legend amphib turns in performance thats better than an old Cub on floats and maybe rivaling more powerful aircraft like the Cessna 185. Obviously, it doesnt carry nearly the payload.

For our test hop with Dick Parsons, we found a small freshwater pond of a couple of acres and we shot video with takeoff runs in the 10- to 12-second range. Baumanns Joe Birkmeyer apparently managed a 7-second run during testing, which strikes us as quite a feat.

Surprisingly, the amphib is no slouch in cruise, even dragging those big floats. On the way to the pond, we saw 95 MPH at 700 feet, which is fast enough to actually go places that arent in practical reach of a 65-MPH Cub.

Since the Legend is essentially a Super Cub airframe (without the flaps), its cabin is a bit more commodious than a J-3 and, indeed, some of the other LSAs. Ingress and egress with the floats is actually reasonable because theres more stuff to perch on and grab hold of.

At $159,000 complete, the amphib is near the top tier for LSA pricing, but we think its a fair value given the airplanes exceptional build quality and attention to detail. For more information, contact Legend at www.legend.aero or 903-885-7000.