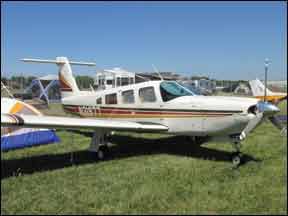 Hauling half a ton without feeding two engines is just the ticket for air taxi, small cargo outfits and families of five plus a dog. The number of makes is actually surprising if you look worldwide and count antiques, and its growing with aircraft like the Piper Matrix, Expedition (Found) Aircraft E350 and Gippsland Airvan.

The used market, however, is still dominated by four venerable models that have been around since the ’60s: Pipers Cherokee 6/Lance/Saratoga line, Beechs 36-Series Bonanza, the Cessna 206/207 and the Cessna 210. This is likely where youll

find a good deal, although were told well-priced six-seaters dont last long, even in this economy.

Pipers six-seat line reminds us of the old Avis car rental commercial-“Were number two.”-with number one being the Cessna line. But shopping the less-favored has perks.

The idea of a T-tail looked good in the light of a 1977 disco ball, and Piper offered the Lance and Turbo Lance (PA-32R-300T) with T-tails for two years. The downside of these aircraft is a stabilator that isnt effective until about 80 knots (some technique is required for smooth takeoffs and landings) and needing a ladder to preflight for ice in the winter. Buyers willing to put up with these quirks can get an especially good deal on these model years, however.

Piper pluses are a huge rear door for passengers, club seating in most later models and a four-foot-wide cabin for the first two rows (3.5 feet for the third). They are also quiet, largely due to a baggage compartment between the engine and the cabin. Theres a second baggage area behind the rear seats and both areas have 100-pound capacities. Theres usually some configuration that will keep the load within the CG limits. Two pilots and light gear putting the plane out of forward CG is the most common issue.

The earliest 260-HP models have the most useful load (up to 1700 pounds) but they have the least power to lift it come hot or high temps, and they are the slowest. In fact, the Piper line is five to 10 knots slower than the corresponding Cessna or Beech, if arguably more comfortable. An average early ’80s Lance can carry six

adults and light bags for 2.5 hours and 155 knots. Later models had fuel capacities of 100 gallons, but these Togas can be as fat as Rome before the fall. Empty weights over 2400 pounds in some Saratoga HP/TCs leave 1200 pounds useful load. Fill the seats and you can add gas for 18 minutes of normal cruise before you hit VFR reserves-literally.

Fuel management and sumping is complicated in earlier Pipers. Cooling can be an issue with stock turbos. The parts supply is still OK from Piper and some aftermarket sources. Many mods for speed and comfort are also available. They make terrific IFR mounts, and we found many listed with excellent avionic upgrades. This sweetens the purchase deal substantially with older birds.

None of the Sixes are sporty to fly. But the amount you save on purchase price would pay for a pretty good sports car or motorcycle habit if you were so inclined.

The Cessna “200s” cover the full range of load-hauling singles. The 210 will take four people plus bags for a months vacation in style and speed. A late-model 207 could carry the Brady Bunch, including Tiger.

Starting at the speedy end, the Cessna 210 is probably the best compromise of load and speed, with many models offering useful loads in the 1500-pound range. Normally aspirated birds hit 170 knots at altitude. Turbos will best 200 knots.

Technically, the model hit the market in 1960 and got baby-buckets in the baggage area in 1964. It wasnt until the 210K in 1970 that third-row seats a skinny adult could squeeze into appeared, along with an uptick in gross weight. Its from this point on the model is a true load hauler. Later models got more power, higher gross weights (1700 pounds useful load) and longer-range tanks. Theres a pressurized 210 if youre so inclined.

If properly trimmed, the aircraft makes an excellent IFR platform (quite a few are known-icing certified). But no one would call a 210 sporty in handling. Fuel management can be an issue on early models or those with aux tanks. The insect-like gear retraction requires careful maintenance on all models. The cabin width is 44 inches, the same as a 182, and tapers aft. Getting to the third seats requires clambering over the second row. Adults wont be content to stay there long.

The 206s are the slowest of the lot of the load haulers here (and probably the noisiest). Cruise speeds range from 130 to 160 knots depending on model, motor and mods. Book performance on the 207 says its about eight knots faster than a like-year 206.

While the 206s double door in the back opens over 44 inches wide, access to all the rear seats requires a bit of sliding and climbing. Because all six (or seven or eight with the 207) face forward, the passengers may be eating their knees rather than the Indian leg wrestling available with club seating. The baggage area of a 206 can take 120 pounds, an optional belly pod can take 300 pounds. The 206 is the most forgiving on loading-it takes effort to put it out of CG-but it can get nose heavy if lightly loaded.

Like most aircraft, the breed puts on weight with the plush of newer interiors. A decked-out, new T206H might have only 1200 pounds useful load compared to the 1800-pound useful load of a 285-HP non-turbo U206. But it will be faster and climb better.

Parts, support and mods abound, and the airplane has proven its mettle worldwide. But its demand means its probably the most expensive of the load haulers in terms of capability for the dollar. We see more 206s with older avionics and tired interiors in the classified ads as well. Perhaps this belies their utility role rather than as a family cruiser. Be sure to factor such upgrades into your total budget.

Many pilots would argue the Beech Bonanza A36 is about as perfect a compromise as a six-seat single can get. But theres an underlying fear of the cost and limits on what it can really carry. The first is unjustified in our opinion. The second is not.

The machines are a joy to fly-easily the best of the bunch reviewed here-but somewhat challenged in loading. Pre-1979 models have no real baggage area. Owners often remove a seat, trading people for packing space. There is a $5000 mod from Approach Aviation (www.approachaviation.com) to give 1968-1978 Bonanzas the 70-pound baggage area of later models. This is more useful for comfort (not sitting with your bags) than actually loading six people and gear, due to both gross weight and CG limitations. Keeping a loaded A36 within rear CG can be a challenge, especially because the CG moves aft as fuel burns off.

For those who need more speed and power, a turbo A36TC and B36TC will top 200 knots. (Turbonormalizing will do this for an A36, with a gross weight bump as a bonus.) Useful loads in the A36TC drop to the 1200-pound range. The B36TC has a longer wing that earns it about 1450 in useful load.

Access to the rear of an A36 is through generous double doors. There is also a window that opens for emergency egress and everyday cooling on the ramp-a huge plus for Bonanza back seaters. The aircraft is stout. For example, the gear are the same as the much heavier Baron and military T-34. Its also stable and makes an excellent IFR platform. TKS for icing protection is one of almost endless mods. Many A36s have updated panels that can make for a good buy.

While genuine Beech parts may require raising your debt ceiling, the airframes have come down in price. Mid-80s A36s can be less than equivalent 210s, and not much more than like Saratogas. Newer Beeches have a much higher delta; the model is still in production.

Practical points are often justifications for buying the airplane we simply want.

That said, which load hauler would work best for you will depend on which things you prioritize. Need speed and comfort, but not much load? A nice A36 would be our top pick. Need speed and load, but not necessarily six people? Try the 210. For serious load, including six people and comfort, both the Piper sixes and the 206 fit the bill. But we would lean toward the older Pipers for total interior space, configuration and price.