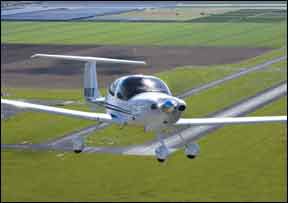 The aircraft mod business isn’t what it used to be. Hell, nothing’s what it used to be in a world where aircraft sales are struggling back from the abyss. In the heyday of mods, dozens of companies offered all sorts of upgrades—fuel tanks, intercoolers, wingtips—were available for new airplanes, but lately not so much.

One new mod that caught our eye recently was Premier Aircraft Sales upgrade to the Diamond DA40, a popular entry level cruiser that also has legs as a trainer and personal transportation aircraft. By the standards of yore, the Premier Edition upgrade is modest, consisting of improved seats and carpet, exterior paint tweaks, a composite prop, an HID flasher system and some additional extra-cost options including an auxiliary alternator and—the biggie—air conditioning. Add all that up and the cost and impact on the airplane’s appeal isn’t necessarily modest anymore, but Premier’s Fred Ahles says it’s enough to get customers to pull the trigger and more opt for the options than not.

Star Is Born
Don’t look now, but Diamond has sold nearly 1600 DA40 Stars since the model was first introduced in 2000, more than half again more than Cirrus has sold of the SR22. Diamond appears to have found a sweet spot with the DA40, an airplane that’s priced about with the SR20, a bit more than the Cessna 172, but a lot less than the 182. Diamond CEO Peter Maurer says the company believes the DA40 fleet is evenly split between private owners, leaseback deals and fleet operators using them for flight training. Since all new DA40s are equipped with Garmin G1000s, the airplanes are a flight school favorite as a reasonably fast, affordable glass-equipped trainer.

Diamond got the airplane mostly right out of the box, so it hasn’t changed much since its introduction, although it has been tweaked quite a bit. It’s also gotten quite a bit faster with an improved interior. (The early models didn’t really have much of a baggage compartment.) In 2006, the DA40-XL appeared with the G1000 and Garmin GFC700 autopilot.  A year later, the XLS model—upon which Premier builds its mods—added a higher and wider canopy, plus a luxury interior, PowerFlow exhaust and active traffic.

When we flew the DA40 intro model in the spring of 2000, it was equipped with the same Lycoming IO-360M1A the latest models have, but those early airplanes were swinging a three-blade MT composite prop. That combination delivered an adequate but not overly impressive 141 knots. But these days, thanks to prop changes and airframe cleanups, the DA40 is an honest 150-knot airplane. Premier’s air conditioning knocks that back a bit, but more on that later.

Diamond did a superb job on both build quality and balanced, benign aerodynamic manners.Want see what good glass work looks like? Take 10 minutes and walk around a DA40, casting special attention to flap and aileron gaps, which are crisp and even.

When we first flew the DA40, we allowed as how it was like a larger DA20, which it, in fact, is. Control forces are on the light side and nicely harmonized between pitch and roll. The stall characteristics are remarkable for being unremarkable, which is to say benign. In 11 years and at least 1.5 million fleet hours, we can’t find a single stall-related accident and, indeed, not that many accidents of any kind. As far as we know, no other aircraft can claim such a stall-free record.

Ergonomically, the DA40 is quirky but competent. A decade ago, we wondered if buyers would balk at that forward-hinged canopy. They haven’t. We further opined that the unique, rear-opening hatch for access into the backseat might be just a little too weird. It has proved not to be.

We predicted that the bubble canopy, a huge plus for cockpit visibility, would be a pan broiler in the summer. That has turned out to be true, although it’s not as bad as we thought because Diamond added a shade to the top of the canopy and there’s a partially open ventilation lock position for the canopy. These make ground operations tolerable, but not exactly cucumber cool.

“That just wasn’t good enough,” says Premier’s Fred Ahles, who, by 2007, was losing a sale a month because the airplane didn’t have an AC option. Since he couldn’t talk Diamond into developing the air conditioner, Diamond convinced Ahles that Premier should do it.

Premier Upgrade
But air conditioning is just one of the options. The core of the Premier Edition upgrade is an improved interior. Although the XLS was no slouch to begin with, Premier’s upgrade widens the seat by 3 inches at the top and adds a higher quality memory foam and leather with piping. Ahles describes it as more Cadillac, less BMW.  The carpet is also upgraded with thicker material. The upgrade costs $11,500. (The new airplanes are flown from Canada with old interiors and Premier installs the new stuff.)

Also included in that package is the Hartzell two-blade composite prop. It’s lighter, less vibey and claims improved cruise performance, although we couldn’t confirm this in our flight trial. It seems smooth and quiet.

Air conditioning is the big ticket item among the additional options and at $27,900, the most expensive. AC has always been problematical for airplanes because it saps payload and power and usually nicks the airspeed a little. Premier’s installation is no exception, although the performance hit is small.

The compressor is belt driven and requires a substantial square bump in Diamond’s otherwise sleek cowling. The evaporator and air handler live in the belly, behind the baggage compartment. Inflow air comes from a scoop on the belly. When we flew the airplane, we noted that it could still achieve 151 knots true at 5000 feet on about 11 GPH. Since the DA40’s POH has never been revised to reflect its speed gains, we’re not sure how that compares to a stock DA40. Owen told us his numbers reflect a 3 or 4 knots speed reduction, which seems realistic. But it will take higher power to achieve that. The AC option reduces useful load by about 70 pounds, to 754 pounds in the airplane we flew.

Interior details are well executed, including a touchscreen digital control panel and purpose-made ductwork and vents. The system looks like it belongs in the airplane.

Another option Premier offers is a second alternator, a 20-amp B&C unit that sells for $4995 and exacts a eight-pound weight penalty. Base price for the DA40 XLS is $359,800. Add the interior upgrade, the AC, prop and alternator and the invoice will top at just over $411,000.

For more information, contact Premier Aircraft at 954-771-0411 or www.premieraircraft.com.