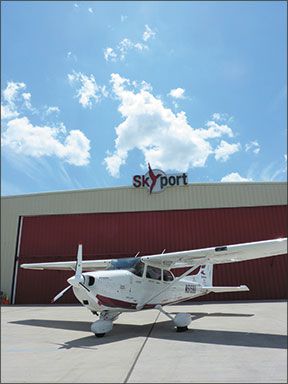 For at least two decades, the airframe manufacturers have relegated new trainers to the “why bother?” category. The market is so moribund that the last truly consequential trainer, other than LSAs, was Diamond’s DA20 Katana, a 1995 intro that was a lukewarm seller at best. Sooner or later, this was going to be fixed and in Redbird’s new Redhawk Skyhawk diesel conversion, maybe later has actually arrived, at least as an incremental step forward.

Redbird, which invented the inexpensive, motion-based simulator market, unveiled the Redhawk at AirVenture in July. Although it doesn’t qualify as a new airframe or even a new idea, its execution can be called innovative: a remanufactured Cessna 172 fitted with a Centurion 2.0 diesel (now Continental, formerly Thielert), fresh paint and upholstery and a not-that-modest glass panel that isn’t a Garmin G1000. Redbird hasn’t promised a final price, but the target is under $200,000.When we visited Redbird’s San Marcos, Texas, headquarters in August, the company was tooling up for serial production and thinks the market might support as many as 30 Redhawks in 2014, a bold start indeed.

For a company that professes no interest in becoming an aircraft manufacturer, and Redbird says it doesn’t, the Redhawk project is a substantial investment. At AirVenture and again at San Marcos, Redbird’s Roger Sharp said, “Look, we wouldn’t be doing this if someone else would build this airplane or one like it.” The most obvious “someone” is Cessna, which has a half-million dollar 182 diesel, the JTA, but no diesel trainer. Cessna proposed its own Centurion Skyhawk in 2007, but pulled back when Thielert ran into trouble. Redbird is convinced they’re missing a market.

Out Old, In New
Converting a Skyhawk to a diesel and flogging it as a trainer isn’t original to Redbird. Before it was bought from Continental, Thielert developed the conversion STC and there are a handful knocking around Europe as trainers and personal aircraft. But the world didn’t exactly explode with woozy desire for Jet A Skyhawks. What’s different this time is a confluence of factors, including Continental’s injection of capital and developmental energy into the diesel market with its purchase of Thielert, Redbird’s we’ll-try-anything ethos and a growing consensus that Cessna has lost interest in selling airplanes. Also, there’s a fat supply of Skyhawks suitable for conversion and the airplane lends itself to more than just a cosmetic makeover.

And the Redhawk certainly isn’t lipstick on a geriatric pig. Sharp told us the airplanes will be disassembled and stripped and critical parts inspected, replaced or upgraded. None of the original wiring or lighting will remain; in fact, not much of anything original will remain, other than the base airframe, which will get a dose of anti-corrosion treatment.

The rest of the project is straightforward refurbishment, such as metal repair and upgrades, paint, upholstery and rewiring, skillsets that are all available at the San Marcos airport, according to Sharp.

There’s no STC to convert older Skyhawks to Garmin’s popular G1000 glass and developing one for a project like this is a non-starter. So the Redhawks are likely to have an evolving suite of off-the-shelf gear from Aspen, Garmin, Bendix/King, S-TEC and other minor manufacturers. The airplane we flew had a pair of Garmin GNS430s, a two-screen Aspen setup, a Garmin GTX330 transponder and a KAP140 autopilot.

“All we need for training in this airplane is heading track and altitude hold. We’re not trying to make it a good personal airplane,” Sharp said. Redbird CEO Jerry Gregoire told us several times that he tilts toward Bendix/King as a principle avionics vendor, but it’s difficult to see how this will happen. Sharp said the airplane needs a simple GPS mapcomm and a second digital radio, products that Bendix/King doesn’t have in its catalog or announced. The perennially delayed KSN 770 exceeds Sharp’s design brief and deliveries are still uncertain. For the time being, we suspect Redhawks will be primarily Garmin and Aspen equipped.

Redbird has acquired hangar space adjacent to its Skyport facility and when we visited, had bought its second conversion airplane—a 1981 P-model Skyhawk—with the goal of developing serial production methods in the coming year. Sharp believes the supply of suitable Skyhawks is more than ample to support modest volumes of conversions, but estimates good ones will cost about $40,000.

Business Case
For flight schools hoping to turn a profit, aircraft operating costs are critical and factors like fuel cost spikes, a bad month of maintenance or unflyable weather, can turn a barely black P&L blood red. Few flight schools have headroom to raise rental prices. The typical G1000 Skyhawk rents for $155—what Redbird charges at its Skyport—but we’ve seen them as high as $170. Higher than that, we’re told by flight schools, and the customers look elsewhere.

The Redhawk addresses this on two fronts: It’s cheaper to buy by at least 40 percent—assuming Redhawk hits its numbers—and, on paper, it’s cheaper to operate.

For argument’s sake, assume that both airplanes are new, glass-panel equipped with autopilots. Redbird is aware that ownership of flight school aircraft is hardly monolithic. Some schools own their own assets, but many depend on non-bank financing and/or leaseback relationships. So even though training is the target market, who is actually buying this airplane? One avenue that Sharp says Redbird will pursue is to sell the airplane to institutional leasing companies that then lease them to schools for either a flat monthly or an hourly arrangement. One company they’ve been talking to is Brown Aviation Lease, which already has such programs in the field, although they declined to give us even blue-sky numbers on how the Redhawk might be structured.

For the diesel, revenue is the same on monthly expenses of $7965 or about 17 percent lower. The diesel’s economics look even better when TBRs rise to 2000 or 2400 hours and if Continental can rid the Centurion of the 600-hour gearbox replacement requirement. Higher avgas prices position the diesel even more favorably.

Equivalent Performance?
In a word, no. The diesel Redhawk doesn’t do what the gasoline Skyhawk does. At a glance, it carries 100 pounds less, climbs slower at low altitude and cruises slower at modest power settings, but can go nearly as fast as the Skyhawk or maybe a bit faster at higher altitudes and higher power settings. Whatever the mode, the Redhawk does what the Skyhawk does on 20 to 40 percent less fuel.

Although the tankage doesn’t change, to stay within wing-loading limits with heavier Jet A, the Centurion conversion’s capacity is given as 47.6 gallons with 44.6 usable instead of the stocker’s 56 gallons. So with full fuel, the Redhawk has 385 pounds left for people and stuff—a two-person airplane, plus bags. The avgas Skyhawk, at 472 pounds with full fuel, does better, but it’s still not a three-person airplane with full tanks.

Thanks to its miserly fuel burn, with equivalent range fuel, the Redhawk diesel narrows its weight disadvantage, but it doesn’t close it. However, earlier model 172s have higher useful loads and will do better.
There are two ways to examine cruise figures. The Centurion is a 135-HP powerplant, versus 160 HP for the Lycoming IO-360-L2A in the stock airplane. If equivalent power output is compared, they’re close. Seventy percent in the gas model at 4000 feet is 112 HP, where the Skyhawk will cruise at 115 knots true on 9.6 GPH. The equivalent power for the Centurion is about 83 percent, where we recorded 110 knots on 6.1 GPH.

For a training aircraft, we doubt if the speed will matter as much as the fuel burn will. We would expect the Redhawk to spend its days grinding along at 65 percent power, burning about 5.5 GPH.

Where the diesel’s performance noticeably lags is in climb rate. Taking off from San Marcos on a 90-degree day, the Redhawk posted better climb numbers than its POH suggested, but these were hardly stellar. At low altitude, the avgas Skyhawk bolts up to pattern altitude at 700-plus FPM, the diesellags that at 600 FPM. It’s the difference between turning into the downwind 100 feet below pattern altitude and reaching it by the mid-downwind. Roger Sharp suggests that training doctrine for the Redhawk may have to be modified accordingly.

Flyability
Sharp says he also looks forward to how students will adapt to the airplane’s simple operation and single-lever power control. As we’ve reported previously, the Centurion diesel is car-like in its operation. Although the Redhawk installation, which stems directly from Thielert’s original EASA STC, uses a button in lieu of key start, it operates just like the Thielert diesels in Diamond aircraft. With the boost pump running, you merely flip on the engine master, wait for the glow plug annunicators to extinguish and push the start button. In two or three blades, the engine is ticking over. While the Lycoming avgas engine has hot start issues, we’ve never seen this in the Centurion engines.

The Centurion is equipped with a dual-channel FADEC and throttle by wire to an electronic fuel-injection system. In addition to ship’s power from the alternator, the aircraft has a FADEC backup battery. Health checks and pre-takeoff run-up are almost entirely automated. Pushing and holding a Test/Confirm momentary button runs the two FADEC channels through health checks and returns the engine to idle when that’s completed.
Unlike the G1000 Skyhawk, engine monitoring isn’t tied into the glass, but is presented in two round instruments that are part of the engine package. These display parameters such as oil pressure and temperature, coolant temperature and gearbox temperature in a simple red-yellow-green vertical bar format. Although these instruments look dated by 2013 standards, they’re simple and functional.

Conclusion
Redbird’s short-term plan is to put Redhawk number 1 on its Skyport line and collect data for presentation at its annual training conference in late October. We’ll be curious about two things: What kind of block-to-block fuel burns will the Centurion actually deliver in the training environment and how will students take to the simpler single-lever power control and simpler avionics? Both of these strike us as desirable features in a trainer touting itself as state of the art. As for the airplane itself, it presents as new. The upholstery detailing is functional and comfortable, the panel is well designed and it has creature comforts such as vents and visors that are a cut above older training airplanes.

While the performance and load capacity aren’t quite up to the avgas model, they appear to be good enough and a worthy tradeoff against the lower operating costs. When and if Continental rids the Centurion of its 600-hour gearbox replacement requirement and pushes the engine TBR to 2000 or 2400 hours, the economics will turn a major competitive corner. Until then, the Redhawk still looks promising, but Redbird will need a year or so of demonstrated real-world data to prove the potential.