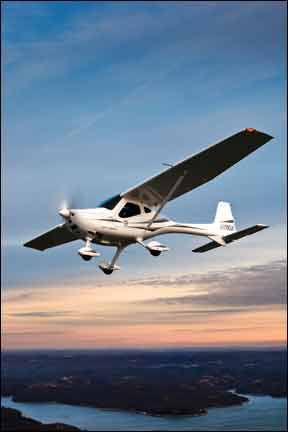 In the not-that-rarified world of LSA marketing, Remos enjoys a spot in the top 10, thanks to modest penetration in the training market and the fact that the company has been around the block a few times.

At a distance, a Remos may look like just another white composite LSA, but up close, it struts some different stuff. These are exceptionally carefully crafted airplanes and despite their relatively high prices, theyve sold rather well in the U.S., occupying a spot behind Tecnam and Legend, according to LSA guru Dan Johnsons research.

With the announcement of the GX-NXT, the company is into its third generation design and although they havent exactly re-written the design brief, the newest

airplane has some significant improvements on what was already a refined product. Remos aircraft are manufactured entirely in Germany, where high labor rates mean its not going to compete on price with airplanes coming from Eastern Europe or China. The company claims that if price competition isnt an option, build quality is and Remos clearly walks the walk in that regard. (Base is about $143,000; fully equipped, figure $160,000.)

If you examine the airframe carefully, the fits are noticeably a cut above other LSAs. The glass work is smooth and ripple free, there are no variable gaps, no paint slobbers and no unfinished surfaces. The NXT we flew reminded us of Diamonds build quality and thats a high compliment.

Less obvious is what must be an obsessive concern with weight, because the Remos airplanes come out of the European ultralight regulatory framework, which limits gross weight to 1020 pounds versus 1320 pounds under the U.S. LSA rules. So youd expect the Remos to have a light empty weight and it does: 717 pounds with a payload of 603 pounds. That means with full fuel-22 gallons, 21 usable-the NXT can haul 471 pounds, which is easily two people and a lot of stuff. With empty weights above 800 pounds, not all LSAs will do this well. On the other hand, theres not a lot of room for stuff, either.

The Remos airplanes have a quirky baggage arrangement that consists of a hatshelf-type area with molded pockets for things like headsets, charts and gadgets. Behind the left seat is a hatch with access to a larger 1.5-by-3-foot nook for larger baggage. Getting at it requires removing the seat, but thats not especially difficult to do. Speaking of seats, theyre adjustable, but not via tracks.

They sit in a series of notches that afford three positions. Its not a bad design, but some pilots may find that they just cant find that perfect seat position to suit. Nonetheless, this is better than no adjustment at all.

Remos Christian Majunke gave us a tour of changes in the NXT over the previous model and although they are largely incremental, theyre a bit more than just cosmetic. First, the glareshield has been shrunk in height so it provides better

visibility over the top, which anyone who has flown the GX will immediately notice. Less noticeable is that theres a little more knee room on the lower lip of the panel, too.

Part of what makes this possible is that steam gauges are no longer an option in the Remos line. Since few buyers were specing them anyway, Remos now offers only glass. In the version we flew, there was a Dynon Skyview on each side, with a Garmin GPSMap 696 in the center stack and only two analog gauges: an ASI and an altimeter. Those will stay, says Majunke, but otherwise the NXT will be an all-glass airplane. And a sophisticated one at that, with a Dynon autopilot with roll steering, altitude capture and-wait for it-the envelope protection thats all the rage in the certified world. The autopilot-commanded entirely through the Skyview-can be set up to maintain a rate climb. But if the airplane underspeeds toward a stall or overspeeds toward the high side, the autopilot is smart enough to reduce the rate. But this works only when the AP is engaged, not as an always-on flight nanny. Otherwise, youre free to manually dive the airplane into a smoking hole or stall it at will.

The Skyview system has become Dynons system of choice and its easy to see why. It borrows heavily from the Garmin G1000 logic and if you can operate that system, you can make the Skyview play, too. In fact, we found it to be stripped down just enough to be a bit easier to manipulate than the G1000. And without the straightjacket of certification, the displays are much more flexible and customizable. You can, for instance, split the PFD into a map or an engine display and select a preference for which side youd like the various elements to appear. But there arent so many choices that you risk falling into a blackhole menu loop. Our only real complaint about the Skyview is that the typography is on the stingy small side. (If you want to see symbology done right, take a look at Eclipses Avio 2.0-its the avionics equivalent of IMAX.)

Remos offers various choices of avionics, including the Skyview-single or dual-a GPMmap 696 or the Garmin aera series for the center stack and an SL30 navcomm that includes VOR and LOC capability. The Skyview system can include Dynons remote SV-262 Mode-S transponder, also controlled through the Skyviews soft key setup.

All of this adds up to a better-than-average LSA cockpit. Everything is easily at hand on the panel or center console, including the brakes, which are operated by pushing a lever forward on the center console. Wait a minute, you might ask, how do you

steer this thing? Certainly it cant have a steerable nosewheel. Certainly it does, something thats a relative rarity in LSAs since these mechanisms add weight. Remos does it with a rod design connected to the rudder pedals. It works well, but its a little odd not have the ability to hurry ground turns with a stab of one of the brakes.

Ground handling is precise, but that brake lever takes some getting used to. The urge to use it as a throttle is irresistible, but if you do that, you stop. Also, with two throttles to pick from, the leftseater needs to use the left side throttle during taxi, the middle throttle for takeoff and flight.

The fuel system is a model of simplicity, at least for the pilot. Theres an on-off, but no tank switch. The tank itself lives behind the right seat on the other side of the keel from the baggage compartment. A single line runs gas to the engine, pushed by a pump under the tank itself and pulled by a mech-anical pump in the Rotax. This, says Majunke, gives the NXT the ability to burn E10 autogas because the pressurized line gives a vapor pressure edge. Not so fast. What about phase separation in fuel dosed with ethanol?

“Thats a problem, always,” concedes Majunke. Remos councils to avoid E10 if possible, but to sample and examine the fuel carefully if it cant be avoided. (The Rotax is happy with avgas, E5 or up to E10. But avgas fouls it with lead, adding a slight maintenance load.) One flight school in California we know using E10 in LSAs told us the trick is to cycle a lot of fuel through the airplane so it doesnt have time to absorb much water.

One touch we especially like in this cockpit is dual push-pull throttles, so the left seater can fly with a left hand on the throttle and a right on the stick, the way it was always meant to be. Remos has figured out a way to mount that throttle right in the door opening without it becoming an ingress/egress snag. The doors themselves, by the way, are fully removable and the airplane can be operated without doors up to 100 knots. No tools are required to do this. You simply pop the gas spring loose from the door frame, then extract the pin from the top hinge by pulling a placarded knob. It takes 15 seconds.

Tools are required to see another of the NXTs tricks: The wings fold for storage and/or towing. The horizontal stab comes off, too, by extracting a couple of pins. The main wing pivots rearward and stows tucked in above the horizontal fin. The struts remain attached. Majunke says most owners leave the fin in place unless they need to tow the airplane, in which case its span is too wide for road navigation. The wing stow takes about 10 minutes and requires a provided pin-removal-tool.

Another nice ergonomic touch is sun visors-good sun visors mounted on a flexible stock that make them universally adjustable. They stow with snaps mounted in pockets in the overhead. You dont see this kind of detail in many LSAs and it makes the airplane more civilized and usable.

Another change worth mentioning is an improved nosegear strut thats less susceptible to corrosion and wear, something that has been a weak point for not just Remos, but other LSAs as well.

In short, the Remos flies like it looks. Crisp, smooth and with no surprises. Well, maybe one. Because its lighter than the average LSA, it seems to climb a little better. We easily coaxed 700 FPM in initial climb and even at altitude, it did an honest 600 FPM.

Controls forces are predictably light so like just about every other LSA weve flown, fingertip control is required. Trim is electric only, with a stick-mounted coolie hat. Its not trim hungry, but there is a nose-up pitch moment when the flaps come in.

Cruise wise, figure on about 110 MPH on 4.8 gallons. With only 21 gallons usable, the NXT is slightly short-legged. Call it 3.5 hours with a decent reserve for a still-air range of 375 miles or so. The seats are comfortable enough and the cabin is spacious enough to support that.

Remos new CEO, Theo Paffagen, told us that the company is working on a model that will have non-folding wings, so the gas will go into conventional wing tanks, perhaps allowing for more of it. Better yet, the cabin tank will come out and the airplane will get a conventional baggage space, which we see as a plus for owners who carry bulky stuff.