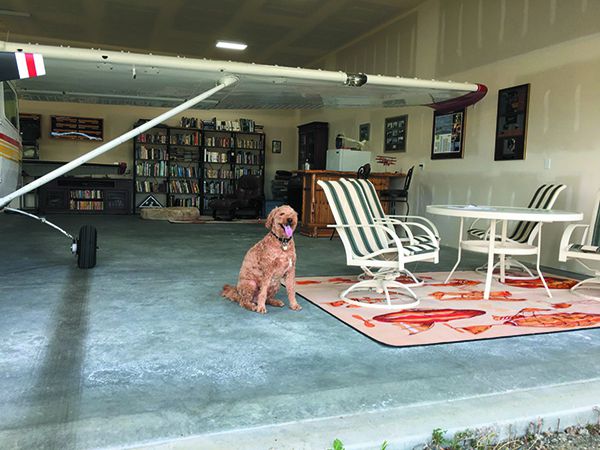 For years, it seems that the most common disagreement between airport management and hangar tenants is what the tenant can store in his or her hangar.

On an airport that does not receive AIP funds the issue is purely between the hangar tenant and the airport owner. Any limitations as to what may be stored in the hangar should be set out in the land lease or the airport rules (there may also be local fire regulations). On residential airports, hangars are houses or parts of houses and the owner often owns the land underneath as well, so the hangar owner has pretty much a free rein over what goes in the hangar.

After decades trying to mediate disputes between airport owners and hangar tenants regarding what may be in a hangar on an AIP-funded airport, the FAA came out with guidance. On June 9, 2016, the FAA issued its Final Policy on the non-Aeronautical Use of Airport Hangars (https://tinyurl.com/y3o6km23). It was the result of a long, involved process in which the aviation alphabet groups, hangar tenants and airport owners participated—in some cases vociferously. In our opinion, the FAA listened carefully, admitted that it had made mistakes in the past on the issue and came up with a sensible policy.

The big picture is that so long as the hangar is used primarily for aeronautical purposes, non-aeronautical items may be stored in the hangar if the items do not interfere with the aeronautical use of the hangar. Put simply, if you can easily get your airplane in and out of your hangar, the other stuff you store in there is your business—unless it’s a fire hazard.

We have seen hangars with an airworthy airplane as well as bare fuselages and wings of someday-to-be-restored airplanes hanging in the rafters. Under the FAA’s policy, that is perfectly acceptable—and we think that’s saved some antique and classic airplanes from the junkyard.

We have also seen hangars where there is an airplane with so much stuff, um, yeah, stuff, around it that getting it out would require hours of hard labor. In our opinion, that’s not compliant. We also think that is where those who are inclined to push back against reasonable rules get themselves jammed up. “But, all I’ve got to do is hook up the trailer and pull it out, then carry out the chicken coop and push the truck out because it won’t start and then it’s easy to get the airplane out.” No. Just stop. Your need to hoard doesn’t overcome FAA guidance on hangars.

Can you put a desk, carpeting, sofa, refrigerator and other amenities in your hangar? The FAA says yes, so long as they don’t interfere with getting your airplane in and out. In our opinion, the hangar in the photo complies.

Can you build an apartment in your hangar and sleep in it? The FAA specifically says no. A hangar on an airport that receives AIP funds cannot be used as a residence. Overnighting in your hangar is not approved. For those who like to push regulations as far as they can, we think that if you land at 2:00 a.m., put your airplane away, sit down on the sofa in the hangar and fall asleep, you aren’t going to get evicted from the airport. That’s as far as we’re willing to push the guidance.

In its policy, the FAA explicitly recognizes that a homebuilt aircraft under construction is an aeronautical activity. By the same token, the FAA recognizes that the builder has to be making progress on the project—it can’t be static. The airport owner has the right to incorporate and enforce construction progress targets in a hangar or land lease. The goal is that the hangar will be used to house an airworthy aircraft in a reasonable time.

Consistent with that requirement is the FAA policy that an airport owner can prohibit the indefinite storage of nonoperational aircraft.

Once you’ve built your hangar, furnish it and enjoy it. In our opinion, time spent in a comfortable chair in your hangar, with your airworthy airplane, with the hangar door open, watching airplanes, is time well spent.